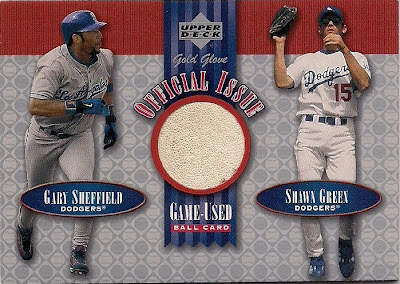 This is my first "Game-Used Ball" card.

It amuses me for reasons that I don't think I can explain.

You see, "game-used ball" is what you would call "a redundant statement."

I received this card from Daniel at It's Like Having My Own Card Shop. It features two of the greatest Dodgers of the turn of the century. And in the middle of them is a ball that they authentically used during a Dodgers game somewhere in the 2001 Major League Baseball season.

Be still my heart.

When card companies stray from the jersey material and go off on baseball-related tangents like wall and seat and bat remnants, I start wearing a smirk. Just who are they trying to kid? The appeal of a jersey relic -- if there is any appeal in those at all anymore -- is that a player wore it -- it touched the player. This is all weirdly intimate and something I don't even want to think about it all that much, but facts is facts. Jersey cards are considered "hits" because it features a scrap of cloth that once cozied up to a baseball player.

Sure, they picked it up and threw it -- if you believe Richard P. McWilliam. But it's certainly not like taking the jersey off a player's back. Let's face it, when my dog goes off to that great dirt pile in the sky, a lock of his hair will hold more meaning than the ball he slobbered all over.

Jerseys are more personal. (More personal than laundry tags, which I think is an odd phenomenon).

Bats are OK. If I don't think about it too much. Then I start wondering if it's really a table leg from the cafeteria hall.

And it just gets less meaningful from there. Seats? Walls? Door knobs? (Oh, it's coming). Why don't we just scoop up some pavement from the stadium parking lot and link it to a player. We can call the cards "Asphalt Artifacts."

I will say that one attribute of this card is that it is a good conversation starter.

"What is that between Sheffield and Green?"

"A ball? Really? How did they get it in there?

"I don't know, they shaved off part of the leather or something."

And the conversation just descends from there.

Needless to say, Daniel, this card has provided me with hours of entertainment already.

One more card from the package: 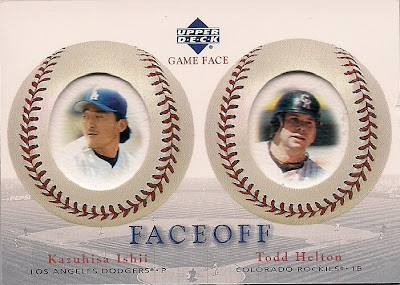 More balls. Two of them. And I can't even type two words without your mind plummeting into the gutter.

I have no desire to own a single Todd Helton card. This blog is filled with references to how that man has plagued me in card-form.

Yet, I asked for this card. Because I can't bear to not own a Kaz Ishii card that I don't already have. I'm like a 3-year-old. Honestly.

At least Ishii is turning away from Helton. Like any good Dodger should to any Rockie. Just look away. He won't get the attention that he so desperately wants and he'll just leave.

By the way, the back doesn't address any kind of relationship between Ishii and Helton at all, which I would think would be the whole point of a card with the title of "Faceoff." But what do I know? Just little ol' card collector here.

So there you go.

And kind of like the Dodgers on the field these days.

Play at the Plate said…
I'm uncomfortably certain that "ball-shaver" is going to garner many hits for this post.
September 12, 2012 at 4:20 AM

carlsonjok said…
If you think a game used jersey is wierd, wrap your mind around the Yogi Berra game used pants card I have.

Brad's Blog said…
I'm a fan of the ball cards, i picked up one recently and its neat, who knows maybe my favorite player got a hit with it
September 12, 2012 at 7:50 AM

I know. I have the Duke's pants.

Daniel Wilson said…
Glad that these balls are with someone who will take good care of them!
September 13, 2012 at 7:35 PM