September 05, 2012
(It's the morning after the first day of the return to Twitter. And I'm beat. I'll have ease up on the pace or I'll end up babbling about the presidential election. ACK! So ... let's get back to basics. Time for Cardboard Appreciation. This is the 159th in a series): 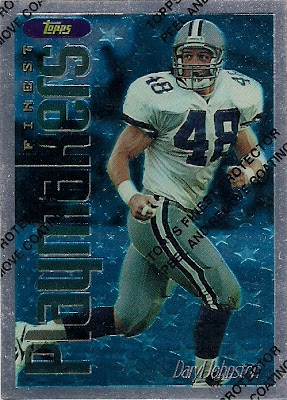 Today is the start of the NFL season, and I'm finally ready for some football.

I don't intend to collect an entire football set or join a fantasy league or anything crazy. But I've been trying extra hard to follow the avalanche of football names while reading stories at work. That includes attempting to connect the dots about which guy with 47 consecutive consonants in his first name is on this team and which guy with two letters in his last name is on that team.

Who am I kidding? I'm never going to figure it out. The NFL is destined to always be a jumbled mass of faceless names and numbers.

So you really appreciate it when one of their players stands out (and why players like T.O., Deion and Ochocinco are so celebrated).

One of those players for me is Daryl Johnston.

I know him as the guy who played for Lewiston-Porter high school in a quiet town outside of Niagara Falls, N.Y.

I never saw Johnston play high school at Lew-Port. I saw the remnants of what he left behind. When Johnston played for the Lancers in the early '80s, they were a powerful team that won championships. Johnston graduated in 1984 with a 4.0 grade-point average and moved on to Syracuse.

I arrived at Lew-Port in 1988 as a young sportswriter with limited knowledge. Fortunately, Harry Lawler, the football coach at Lewiston-Porter and Johnston's high school coach, was there to give me a kindly hand. Lawler was one of the most helpful coaches during that time period when I was figuring things out. Patient. Quiet-spoken. He answered my questions. He wasn't like a lot of other football coaches I encountered then or since.

When I went to Lew-Port's games, I realized that they weren't a very good football team. I saw several Lancers losses, and I can't recall watching a win. But I vividly remember standing in the aluminum bleachers as Guns n' Roses' "Welcome to the Jungle" roared out of the sound system, an alleged harbinger of the devastation that the Lancers were about to demonstrate, and then watching Lewiston-Porter lose 28-10 in front of an eerily silent, sparse crowd.

I wondered what it was like when Johnston was there. People still talked about Johnston four years later, and older sportswriters let me know that this was the town where Johnston emerged. There was a sign paying tribute to him right off the exit ramp. You got the feeling that some of the fans were waiting for the next Johnston to show up. But he didn't. Not when I was there.

I never talked to Johnston, even while I covered his high school and college teams. I even covered the Cowboys once when he was on the team. But I followed him as if I had several conversations with the man. Because I felt like I knew him, because I knew the community where he once lived.

Today, the card that you see up top is not only the only card of Johnston that I have, but it's the only Cowboys card that I have.

I plan to buy a few packs of 2012 NFL this season, and try to get to know some of those wacky names a little better.

The sport will never match baseball in my eyes. But I won't give up that Johnston Finest card. It's my connection to that time when I was figuring things out in Youngstown, N.Y.

EggRocket said…
Nice post Owl. I almost didn't read it when I saw it was about *gasp* football cards. But I trudged through. ;)

It brought back memories of my own early history in journalism. For me it was 1987 when I started working as the sports editor in Tama, Iowa. Our company produced five papers a week (four weekly newspapers and a shopper) and two of the papers came out of our office. The tiny town of coverage for me was Elberon, Iowa and the former star that seemed to live on in the breath of the community was Chad Hennings who left the dusty roads of his tiny hometown to play for Air Force and then the Cowboys.

And I also remember some of the coaches who were so kind to me in those early years. I look back on some of them with the same fondness usually reserved for favorite teachers.

Ana Lu said…
Hello there.
I started collecting baseball cards and thought of trying to buy some other sports cards but got stuck. Baseball the players can be seen. I see their face and all. Football players portraited on cards or are in helmet and pads when in action or just standing there if I want to see his face. Ok I went for ice hockey cards because at least I can see their face under the helmet.
But nothing wins to baseball cards. Even if we shall know other reality just for the case.

Commishbob said…
A football post from NO and the O's in the AL East race. Who'd a thunk it?

But it is a good post. It's nice to have a 'personal' connection to a player. Make cheering more satisfactory. Bear WR Johnny Knox played hoops in my driveway back when my kids were with him in school. I hope he makes it back from that terrible back injury.
September 5, 2012 at 10:12 PM

But nonetheless, I should probably swap that photo out sometime.
September 7, 2012 at 9:10 AM