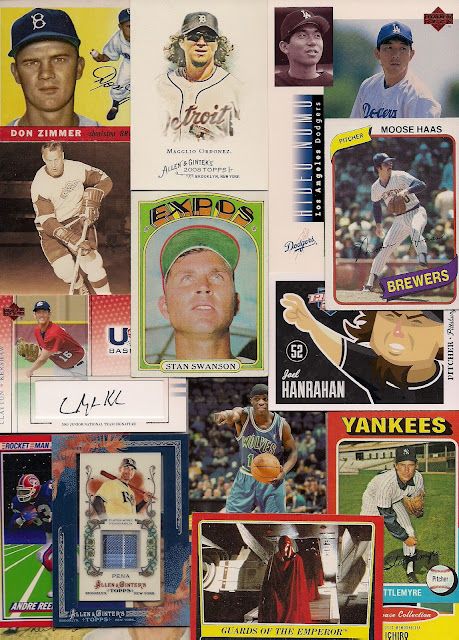 Is that little montage glorious?

The thing I said I didn't understand and the thing I quit over a year ago.

And I have my reasons.

I quit Twitter because it had become a chore. But the more I thought about it, the more I realized it was a chore because I wasn't using it the way that I should and I was confused about it.

For me, Twitter is an informational tool. A way to give and to receive information quickly. That's how it works at my job. That's how I like Twitter.

The last time I was on Twitter I tried to do all that. And I got sick of it. It felt empty and I wasn't getting anything out of it. So I quit.

But there were a handful of things that I missed about it. Most of that was the informational stuff about the hobby that I received when I was on there. There was some good stuff (and not to mention a few contests to be won). There was also the immediacy of sharing information about cards that is really unlike anything else. There are people over there that used to be over here that I miss.

And then, a few days ago, I thought, "what if I created a Twitter account and just tweeted about cards?" The hobby and trading cards. And that's it.

So that's what I decided to do. I have a Twitter account called NothingButCards. You can find it @nightowlcards

All you will find on it is my thoughts about cards, and info I turn up concerning cards, and the collecting hobby. That's it.

I also won't respond to comments concerning the above from any followers I happen to have. Not that I don't care about your problems. It's just that I don't want to get involved in stuff like that on this account. If it's related to the hobby, then, yeah, we can chat about that. If you really need my attention concerning something else, well that's why I still email.

You know, like the stuff you find here on this blog. Except much shorter.

Yes, I'll be promoting my posts here and on the 1971 and 1985 Topps blogs over on Twitter, too. They are card-related, you know.

But I hope most of it is just fun little, "hey maybe you didn't know this" facts, or trading thoughts on whatever new release might be out.

Many times I hear something related to cards and there is no place for me to relay it. It can't be a blog post because it's like two sentences long.

Now I have a place where it will go.

So, if you're on Twitter, and want to check it out, feel free to follow me. I've even got a nice little icon of U.L. Washington to amuse you.

As for the background image, I couldn't add it to my account because apparently the file size is too big. I can't make it smaller because I don't have photoshop and I already tried to convert it from a JPEG to a GIF and that didn't do anything.

I'm hoping this latest experiment will work out better than the last.

So, that's the big announcement.

What'd you think it was going to be? That I was following my wife to the Ukraine?

Sorry, I don't lead that interesting of a life.

Andy said…
You can use pixlr.com to make the image a .png and that should be small enough. Make sure it's 72 DPI.

I hope that your posts from all your blogs get automatically posted as links to Twitter--that will make it even easier for me to share them.
September 4, 2012 at 3:48 AM

Jeff said…
If you have Microsoft Office, then Picture Manager will resize pictures easily.
September 4, 2012 at 10:02 AM

deal said…
Team Phungo proud to be follower #18. good luck keeping your professional and card accounts separated. It can be confusing.
September 4, 2012 at 10:38 AM

Anonymous said…
I've never been on twitter. I always just liked the idea of blogging better - I'm more of a "journal" or "log" type person than a "here's a random thought" type.

dayf said…
If you're following me, you're sure as hell not going to get a whole lot of card information. Just telling you that right now.

Also: two months before a presidential election is probably the worst time to join Twitter ever. I can already tell we're gearing up for ALL OUTRAGE. ALL THE TIME. ABOUT EVERYTHING.

Anonymous said…
T'Wolves are going to regret dumping Jonny Flynn and going with the Euro-trash clown.
September 4, 2012 at 12:30 PM

night owl said…
Thanks for the help on the background image. It's now up and official-like.
September 4, 2012 at 1:02 PM