September 21, 2012
I have been in a Luis Tiant frame of mind lately. I have no idea why. But just today I scanned the 1979 Topps Luis Tiant card to use for a Cardboard Appreciation post, and then realized I just featured the card three short weeks ago.

I have very little brain left.

I haven't done a poll in probably a year. That isn't good. If this was a smoothly run blog, there would be a poll up on the sidebar every day. With different topics every day. And prizes for the voters.

But you're stuck with me. With no money. And no time. And a shrinking brain.

Anyway, back to Luis Tiant. He is one of my favorite players of my childhood. A character. A talent. Part of some of the greatest games from the '70s era. He was central to Red Sox-Yankees showdowns and Red Sox-Reds classic epicness. He talked funny. He smoked cigars. He spun around on the mound.

Since he was so colorful, he should have some great cards to review, right?

Well, they're pretty good. Not great. It was the '70s, so everything is hit-and-miss. But I'm asking you to figure out what the biggest hit was from his 1970s Topps cards.

There is no 1972 Topps card to vote on, because Tiant wasn't included in the '72 set (he had a forgettable 1971 season). If I had any online artistic skill, I'd create one and include it in the list of candidates. But instead, we'll just skip it.

Here are your choices: 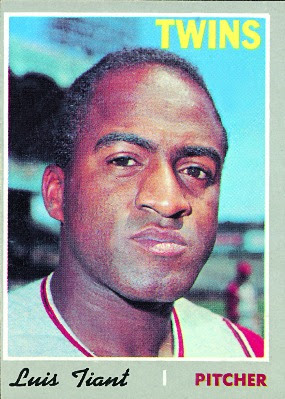 1970: Luis Tiant as a Twin, wearing an Indians jersey, while standing in Yankee Stadium. Topps has one-quarter of the American League taken care of in a single card. This is also Tiant's only hatless card. 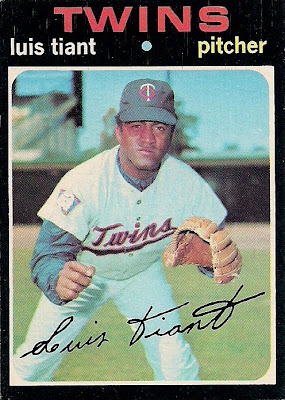 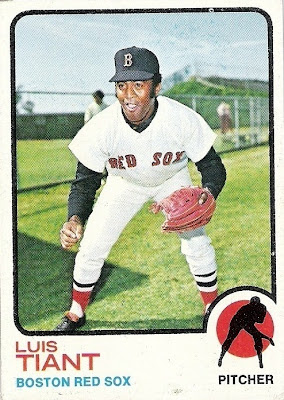 1973: Tiant's first card as a Boston Red Sox. This is one of those "old" cards that was floating around in my brother's collection that was fascinating just because it came from a time before we were collecting. Tiant looks a bit like a stuffed doll on this card. 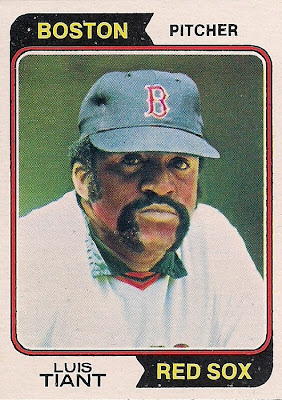 1974: Ah, the Tiant I know and love. The first appearance of the fu manchu. Tiant was coming off a 20-win season and leading the Red Sox to future greatness/heartbreak. 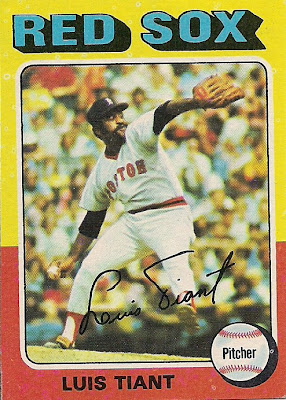 1975: The card I fully expect to win. It's a great one. Lost in all of the action and colored border is the revised Tiant signature, which will be featured with much more style in a moment (it also appears that Tiant signed his first name 'Louis'). 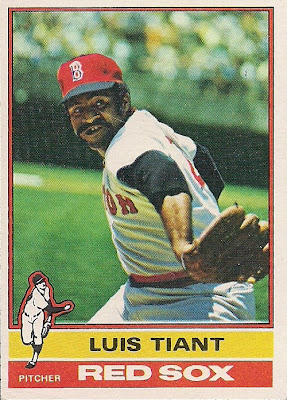 1976: I'd have to vote for this card, just because it's one that I coveted quite a bit as a kid. Tiant and the Red Sox were coming off their fantastic 1975 World Series appearance and he was a key component of those games. Plus, it's the first time seeing Tiant in a red cap. I was introduced to the Red Sox when they wore red caps, so it seems right. 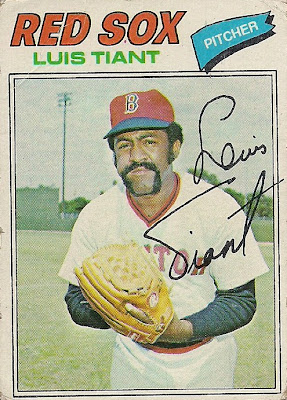 1977: There's the signature absolutely dominating the photo. Wow that thing is big. Not much else to say, other than that Tiant kind of looks like a younger, Cuban version of Wilford Brimley. 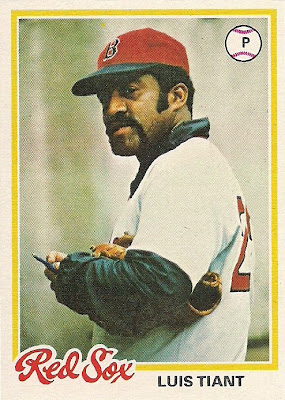 1978: The Red Sox-Yankee wars in our neighborhood were at a fever pitch at the time this card came along, so it's almost iconic in my eyes. I've always thought Tiant was rubbing up a baseball, but now that I look closely, he seems to have a pen in his hand. Interrupted autograph session? 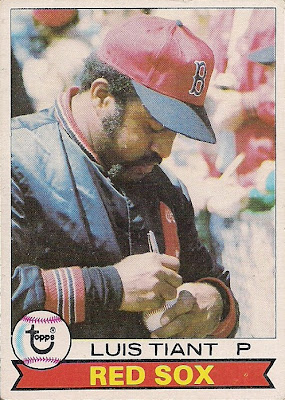 1979: And there he is, signing for real. This is a great card, and one that doesn't get featured as often as it should. There aren't a lot of 1979 cards that stand out, but this one does.

OK, those are your choices.

Don't you love it that I cut things off before Tiant became a Yankee?

Now, this is the part where my rapidly evaporating brain rears its ugliness again. As you may have noticed, there is no poll on the sidebar.

That's because I can't figure out how to get it on the sidebar with my current layout and have the CHOICES SHOW UP!

The choices must come out in black type or something. Whatever the reason, I don't really feel like playing with my template layout to accommodate a poll. Therefore, you're going to have to make your choice in the comments. Sorry, if you wanted to be anonymous, but really, why would you want to be anonymous over something like this?

I'll at least place a link to this post on the sidebar so people can continue to vote for the next week.

If I can figure out how to have the poll options show up, then I'll add it, and add the votes from the comments to the poll. If I can't, well ...

Blame my brain. I do all the time.

JediJeff said…
Gotta go 78. You have the windbreaker under the uni, classic red BoSox hat with the blue brim, and a look of "oh hell, you did NOT take me picture" scowl on his face.
September 21, 2012 at 8:35 PM

...and you could have mentioned sooner that there was no sidebar poll...I scrolled all the way back up, then back down, then up one more time, then down.
September 21, 2012 at 9:26 PM

dayf said…
1974 Tiant is one of my favorite cards. I just love that expression on his face. I might have to draw that face tomorrow, I need a jump start to get my out of my artistic rut.
September 22, 2012 at 12:19 AM

Johnny Bacardi said…
1971. The 1972 set will always be my favorite of them all (it's when I started collecting cards for reals), but I love the way the '71's looked, with that black border. Classy.

Robert said…
I've always been a sucker for cards that show the players giving back to the fans...