Black & white & annoyed all over 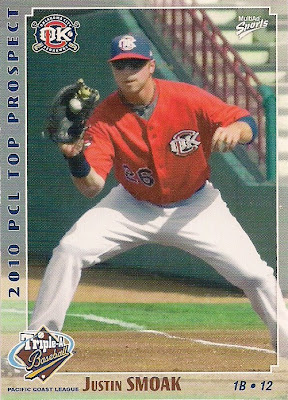 I read somewhere a couple of days ago about how annoying younger people find voice mail. In an attempt to rid the world of voice mail -- a laudable mission, I agree -- they're inventing some sort of techie way to get around it. I can't explain it any further than that, I'm afraid. I zoned out somewhere around the technical part.

But it made me think that each generation has its moments of intolerance with "the way things are." What an older person may think is an everyday fact of life that the younger person should get over, the younger person thinks is the most insufferable idea ever and can't believe the stupidity of the world before they came along.

I'm an older person now. But I'm not old enough to forget my younger days. And I remember being very irked by things that existed prior to my birth and -- to my ever-so-ticked way of thinking -- STILL existed for some inexplicable, but positively STUPID reason.

I did not understand how people could function in a world where the majority of the photos were black-and-white. And it didn't just bother me when I saw black-and-white on the printed page either. To this day, I have an issue watching black-and-white movies. I just can't do it. No matter how interesting the subject matter, the monochrome just bores me. Watching the Wizard of Oz, I'd start out asleep, wake up in Munchkinland and then fall back asleep again when Dorothy returned to Kansas. No place like home??? It's all black-and-white in Kansas!!! Who would want to live there?

Fortunately, baseball cards were in color. Glorious, real-life color. The way it should be. Nothing like those Life magazines from the '60s with all their gray photos of presidents and celebrit .... zzzzzzzzzzzzzzz.

I started collecting in 1974, and except for a handful of Turn Back the Clock cards in the 1977 set and the Bubblegum Blowing champion card of '76, all of my cards were in color. As they should be. Life was sweet. 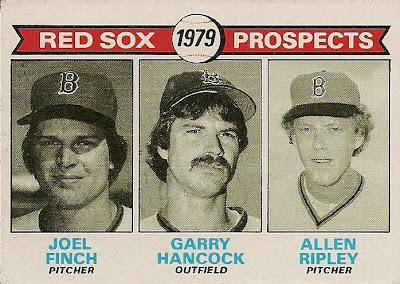 What the hell was that?

The '79 Topps set featured prospects cards -- what I previously knew as "rookie stars" cards. For the first time since I was collecting (but not the first time ever), there were three players on a card instead of the customary four.

I suddenly needed to take a nap.

Even today, when you put the '79 set in a binder, and all of the prospect cards are all together, it's as if the Topps colorist went on a lunch break. Where did all the color go? The cards look lifeless compared to the others in the set.

But it got worse.

The Red Sox prospects card is one of the better ones in the set, to my way of thinking in '79. A lot of them featured bizarre photos like this: 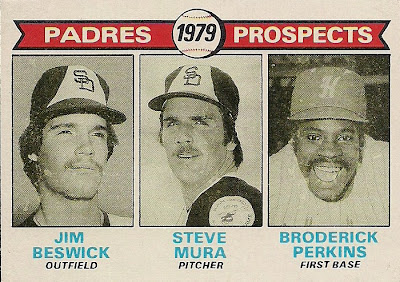 OK, two Padres on my Padres Prospects card. But what the heck is that happy guy on the right wearing? An "H"? There is no major league team that wears an "H" on their cap like that!!!!

I knew my major league teams and that was definitely not one of them.

And there were even more confusing cards like this: 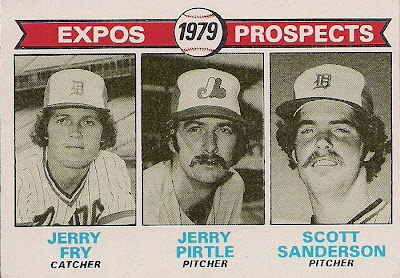 What is that? Tigers on my Expos card??? There's only one Expo on there!!! 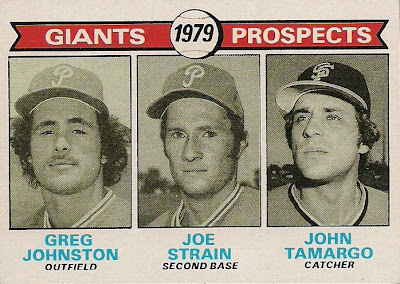 Phillies on my Giants card??? What is going on???

Even my Dodgers weren't immune. 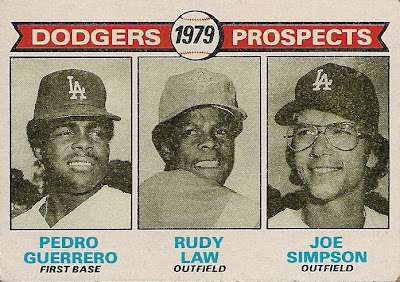 OK, I know that Guerrero and Simpson are Dodgers. But what in the world team is Law playing for?

Of course, much older and wiser now, I know that this was the first time that Topps was featuring players in their minor league uniforms on cards (instead of blacking them out or whatever they once did).

Law is wearing an Albuquerque Dukes cap and uniform, and all those other guys with the unknown logos are wearing their minor league caps and uniforms. And the likely reason for why all of the photos are black-and-white on these cards is that there weren't color photos available of minor league players back then, so Topps just made everything black-and-white for consistency's sake.

Even with that knowledge, these cards still aren't my favorite. 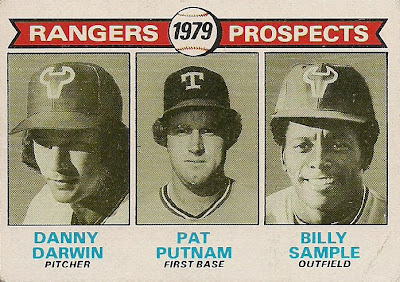 Darwin and Sample, in their minor league caps, overshadow the only guy there wearing an actual major league cap. That shouldn't be. 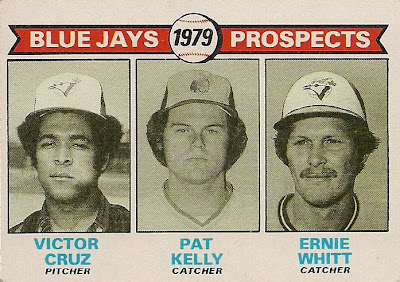 And this card has bothered me for decades. The Kelly photo appears to have been copied from a publication and put on a card. It's a picture of a picture. That ain't good.

Overall, I'm still not crazy about minor league players on baseball cards. I own my share of them, but I'm not all that into them. Heritage's Minor League Baseball set was released today and there's a little bit of hoopla about it, but I just don't care.

One thing I will say is that with all the minor league sets over the years and the explosion in interest in minor league ball over the last couple of decades, the quality of cards featuring minor leaguers has gotten much, much better, as the Justin Smoak card at the top of the post demonstrates. It's professional quality, even from the sets that are issued by individual teams.

And, best of all? 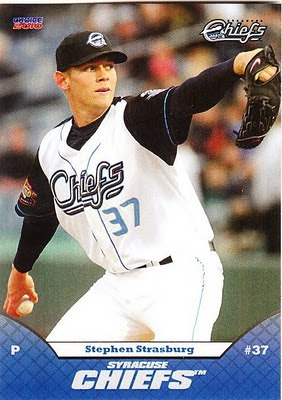 Play at the Plate said…
Color is king, but I do like that Rangers card with the minor league caps. It would be better if they were all wearing the same cap though.
September 12, 2012 at 7:56 PM

madding said…
I don't know, that Smoak photo looks like it could have been shot by me with my iPhone. And I have one of those old iPhones. And I don't have steady hands.
September 12, 2012 at 8:42 PM

BASEBALL DAD said…
When I was growing up in the 50's, my Father was very much into photography.He had a darkroom in our basement.I still remember being amazed watching him drop those blank papers into the tanks and having a b&w picture magically appear. B&W is sometimes good, but baseball cards should be color !
September 12, 2012 at 9:37 PM

Jim from Downingtown said…
The "H" was probably for Hawaii, where the Padres' AAA team was.

It looks like Topps outsmarted their airbrush department, who apparently didn't have gray in their arsenal!
September 12, 2012 at 9:48 PM

Anonymous said…
Dammit, now you got me curious about the article regarding voice mail and today's instant-gratification youth.

Once a Cub said…
When I decided to make my All-time Cubs roster custom set, I decided I wanted a universal look...which meant black and white photos all around. Whoops, sorry I didn't see this sooner! As in a year ago...
September 12, 2012 at 10:26 PM

Anonymous said…
...I forgot to mention; I think the other unidentified teams were the Denver Bears (Expos), Phoenix Giants, Syracuse Chiefs (Blue Jays) and Tucson Toros (Rangers).
September 12, 2012 at 10:27 PM

And I HATE Voicemail*. If someone leaves me a voicemail on my phone, it often stays there for days before I check it. It's time and impatience from me, I guess. A text should suffice, but a voicemail takes too many buttons - calling voicemail, typing in a password, then listening to some voicemail robot talk for 15 seconds.

* - At least on cell phones. For work I get it a little bit more. You still (at least for now) need work phones if you have a desk job, and it's not always feasible to email someone - you may have their phone # but not their email. But if you have my cell #, you don't need to leave a vm - a text is faster for everyone.

Oh, and I decided to enter this from my google account because it's fewer clicks than the open ID, wordpress thing :) ...