The whippersnapper's got this card thing down 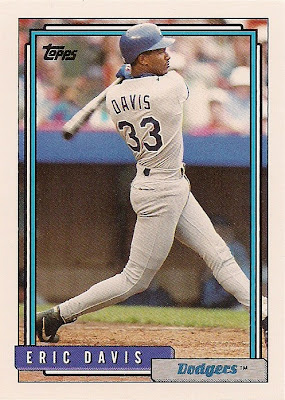 One of the newer blogs that came to light right before Blogger started freaking out over the number of blogs that I had in my blog roll was Dime Boxes -- The Low-End Baseball Card Collector's Journey.

If you're not familiar with it, then I'm sure you've already come up with a picture of a person who would name their blog that. He's probably 58 years old, right? He might not be married. Maybe he's divorced. Maybe his wife has long-suffered his card collecting habit for decades. Maybe he has never been married and lives in a basement apartment with his two cats and a collection of National Geographics.

Who else would look for all their cards in dime boxes? Certainly not someone young and wide-eyed, who doesn't have to shield his eyes when he sees something shiny. Because his eye sight is perfect! He's young and on the hunt for MOJO!

Well, I am telling you, you are WRONG with your stereotypes and biases. How could you compartmentalize the youthful owner of the Dime Boxes blog? Did you know this dime-box guy is still in school? At least I think he's still in school. I've seen pictures of him on his blog and either he is the youngest 58-year-old I have ever seen or he is STILL IN SCHOOL.

He goes through dime boxes and he's STILL IN SCHOOL!

Do I have to repeat it again? Do you know how great that is?

Not only that, but his posts address subjects that I address on my blog. In fact, he's displayed a lot of the same cards that I have displayed in the past. Except that he's younger than me. And is a lot wiser than I was at that age. There was no shiny or mojo when I was that age, but if there was, I'd probably be chasing it. A dime box? What the hell does anyone want to do with a box of dimes?

Here is the greatest card that he sent: 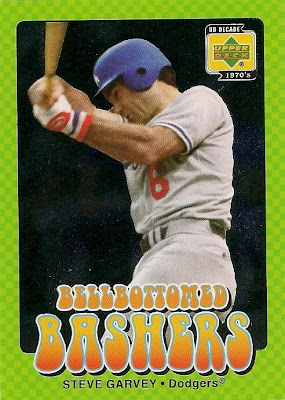 Now I do. I love the Bellbottomed Bashers set from 2001 Upper Deck '70s. I need to pursue the rest of it and then chase down the Disco Dandies set. Then, I'll finally be happy. 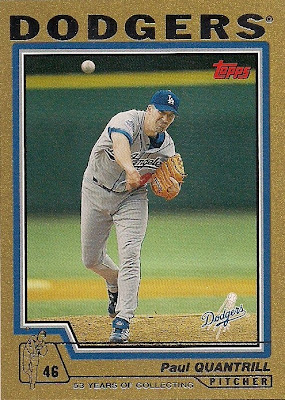 I think this is the first gold card I've featured since I flipped out and did that We Buy Gold Inserts commercial. I'm glad you liked it. It means ideas that come to me at 1:17 in the morning do not go in vain. 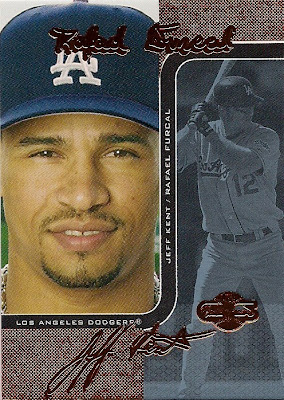 Oh, goodness. It's Co-Signers. See? Topps DOES do some smart stuff. It got rid of Co-Signers. I still don't know what this set was about -- I hope I never do. 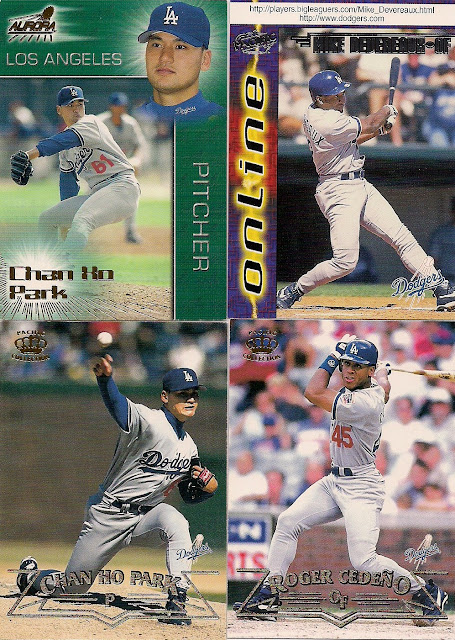 We've waded into the Pacific portion of the post. A bunch of players who disappointed. 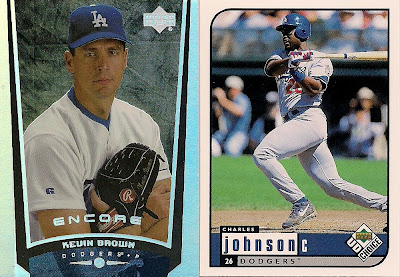 And finally we have three cards of one of least favorite Dodger pitchers ever. I cringed and cursed every time Ismael Valdes took the mound. Yet, I am doomed to collect him. Ismael has his ultimate revenge.

But I'm not ungrateful. All of these cards are ones that I needed, and I'm wondering if Nick grabbed any out of dime boxes.

Personally, I never find any dime boxes when I'm at shows (and don't get me started about card shops). If I'm lucky, I find 50-cent or dollar boxes.

Next time I'm around them, I'll have to dig through some and find some cards for Nick.

I don't want him thinking it's solely a young person's job.

Nick said…
Thanks so much for the kind words and glad you enjoyed the cards! (The Quantrill and Garvey cards did indeed come out of a couple dime boxes.)

Cool Breeze said…
His blog is really good and he makes me remember how fun collecting was BEFORE i figured out these pieces of cardboard were actually worth something and you had to get a pack with an insert/relic/etc....
February 16, 2012 at 2:27 PM

AdamE said…
Nick is one of the blogs I look forward to reading every day. When those Gummy things come around again he's a shoe-in for best new blog.
February 16, 2012 at 6:30 PM

Michael J Buchanan said…
You can add me to the list of guys that enjoy Nick's blog. "Discovered" it about a month and a half ago. Visited every day since and he is one of only a handful of BBC blogs I've bookmarked. I hope he keeps it up.
February 24, 2012 at 10:27 PM