Repetition is the sincerest form of not giving a damn

February 22, 2012
I made a trade with Jason from Hobbs' Knights a few weeks ago. He sent me a pack of 2012 Topps, which contained mostly cards that I didn't have -- always nice.

He also sent this card separately, which is also nice in its own little "I collect that guy" kind of way. 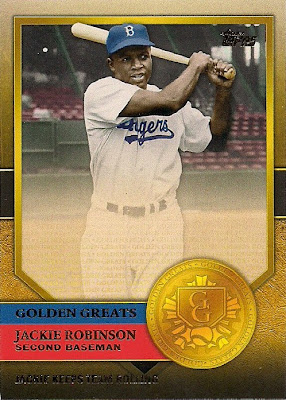 But if I'm being honest I don't like these inserts at all. I think the gold commercials parody post I wrote a couple weeks ago made that pretty clear. But especially with these particular Golden Greats, I find the look epicly boring. The design, the weird gold coin logo, the faded picture, the questionable concept. It all smacks of an excuse to put a legendary player on another card.

It didn't used to be the way. Remember 10 years ago when the "Legends on New Cards" craze first began? Remember Upper Deck Legends and Flair Greats and sets like that? Most of the photos of the older players were different -- at least the Jackie ones were different, anyway. I have a hard time paying attention to people who don't play for the Dodgers.

You'd see a photo repeated once in awhile. But nothing like this.

The photo on this Golden Greats Robinson card comes from the 1950 Bowman card of Robinson, I believe. 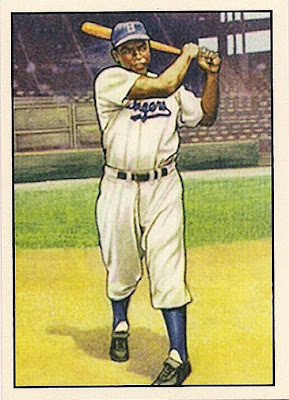 Obviously, that's not a real 1950 Bowman. It's one of those pre-Topps reprints from last year's Topps set.

And for more than 50 years, that's primarily where you saw this image on cards. "Robinson following through on a swing while looking off to his left, oh, of course, that's 1950 Bowman." 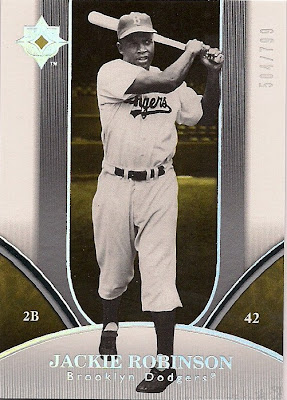 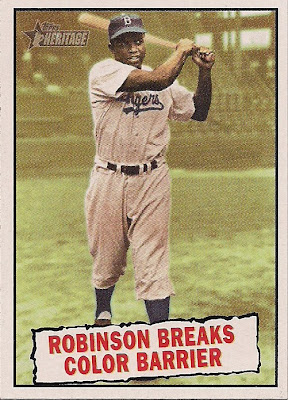 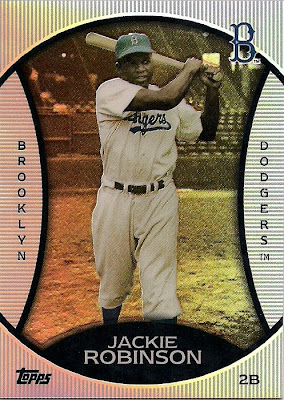 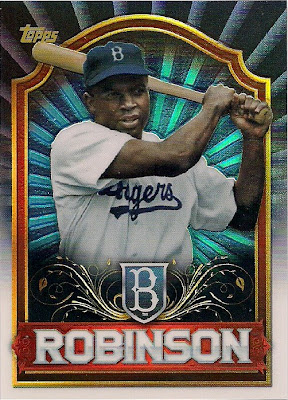 And I'm sure there are a number of other cards showing that image, which either I don't have or I just didn't have the time to find.

This isn't the only image of Robinson that Topps repeats and repeats. There's the one where he's leaping with his glove outstretched in front of the Schaefer advertisement on the scoreboard. There's one of him posing on one knee with a bat in his hand. There's the one with his arm holding the ball, preparing to throw to first.

I know that there aren't as many photos of players who competed in Robinson's day as there are of current players. And I know that Topps may have a limited supply of photos from which to choose due to licensing issues or whatever.

But here's an easy way around that:

Don't issue so many Robinson cards.

I've gone through this before.

Really. I collect Robinson cards. And I'm OK with never seeing another new one. It's got to end. I've been saying this for over a year.

The repetition of cards is the problem, not the availability of images. In the same Golden Greats set in which I displayed the Robinson card, there are four other Robinson cards. Five Robinson cards in an insert set (there are five versions of each player in the set -- including other old-timers like Ruth, Clemente, Aaron, Koufax, etc.). The insert set is 75 cards large and there are only 15 players featured in the set!

Do we really need five Robinsons in an insert set that is boring as oatmeal? Is anyone actually enthused about collecting these Robinson cards? Because of the glut of Robinson cards the last few years, I never go out of my way to find a Robinson card. I just don't care. I save that for Kershaw and Hershiser and Kemp and Koufax (although I have a feeling the Koufax glut will wear me down soon). At least I know their pictures will be different.

Why is Topps issuing so many cards of these same players? Isn't one enough? Are multiple base cards/inserts of the same legend enticements to collectors? And if they are enticements, does the same photo every single time really get people to shell out their hard earned money?

I welcome people sending me all the Robinson Golden Greats. Thank you. Thank you. But if I don't obtain the other four cards this year, it's possible I never will. I'm numb to the images now. I just don't care.

It's obvious Topps doesn't care. Why should I?

Oh, by the way, the actual trade with Jason was so I could obtain a 1972 Topps card I didn't have: 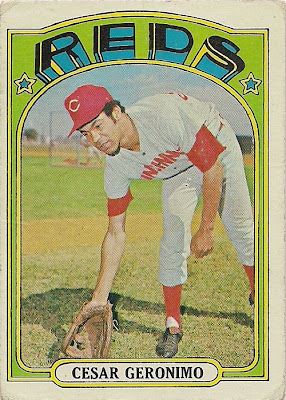 There's a pose that I've never seen Cesar Geronimo make on a card before. What a concept.

Nick said…
100% with you, I actually mentioned this topic a few days ago on my blog. It seems like there's a few Jackie Robinson cards in every set nowadays.

I collect Robinson as well, but it's gotten to the point where I'm not even that enthused when I pull one of his cards anymore.
February 22, 2012 at 7:32 PM

moremonkeys138 said…
I noticed this too with a lot of the retired players Topps has contracts for. George Sisler is one of the most notorious 'same picture on every card' guys thanks to Topps. In 2010, they issued maybe 12 cards of him throughout the year and probably 9 of them had the same picture. I'm guessing on the numbers here but you get my drift...
February 22, 2012 at 8:31 PM

hiflew said…
This is one of the many reasons why I am glad to be a collector of an expansion team. I get to avoid the glut of retired players.

The thing I hate most about it is that back when I was a kid I would have given anything to pull a Mickey Mantle or Hank Aaron or Babe Ruth from a pack. Now they are just another card (especially Mantle) which is a disservice to these great players.
February 22, 2012 at 8:43 PM

Fuji said…
Topps should have just made it a 15 card insert set (one card of each of the 15 players)... and made them 5x harder to pull.

The one photo/painting I pray card companies don't overuse is the Jackie Robinson sliding into home plate photo/painting, because I don't ever want to get tired of looking at his 56 Topps card.
February 22, 2012 at 11:40 PM

Ross said…
Nail on head here. Frankly, I'm sick and tired of having these legends in amongst current players in current sets. The legend SPs from Topps last year was a good idea but only if getting a card of a legend had any kind of novelty left. It does not. They've completely watered down the excitement one should get from owning a Ruth or Mantle or Mays. They need to stop stop stop.
February 23, 2012 at 9:35 AM