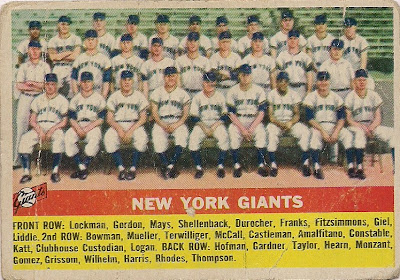 Hey, if I'm going to show them all eventually, I have to show this one.

This is the first team card from the 1956 Topps set that I have displayed in this series, and it suffers from the same issue that other team cards from the '50s and '60s suffer from -- you can't recognize anyone!

At least during the '50s, Topps would run a handy identifying key across the bottom, although sometimes distinguishing who is in which row is rather tough. Another issue with this particular card is the IDs aren't from left to right -- like with IDs with 99 percent of photos -- but right to left.

How do I know this?

Well, unfortunately, there were only a handful of African-American major leaguers during the '50s, so when I'm desperate to identify someone out of the mass of similar, blurry Caucasians, I look for the darker skin. Willie Mays is seated third from right in the front row. Go down to the identification key and Mays is the third guy mentioned in the front row. Topps is listing right to left. Geez.

Then, Hank Thompson is standing in the back row in the far left corner. But he is the guy listed last in the photo ID key. Right to left again.

Only the Giants, right?

I don't know if the middle row is right to left or left to right, because it's just a line of white guys. I thought that the "Clubhouse Custodian" listing in the ID key would help, but there are two guys in the middle row dressed as custodians.

In short, I just don't think Topps really intended any of the players to be identified in '50s and '60s team cards. Especially those '60s cards in which the whole team looks like it was photographed from the moon. Topps didn't even list names with those photos.

But, by far, the best part of this team card, and many team cards of that era, is the back. 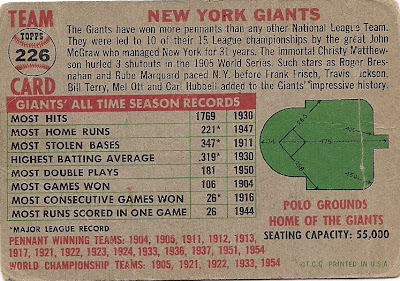 Look at all that great information! History! Stats! Records! Facts! And a tremendous map of the dimensions of the weirdly shaped Polo Grounds!!

I could spend a day with this card back. And I don't even like the Giants. (Fortunately, the Dodgers have since tied the Giants for most pennants for National League teams -- each have 21).

There were all kinds of good facts on the back of team cards all the way up until -- well, 1975 -- when Topps started putting checklists on the back.

By the early '80s, teams cards had disappeared. They've returned recently -- in various forms. Some even have information on the back, but it's not nearly as detailed as this card is. How cool would it be if Topps put a drawing of the dimensions of each stadium on the back of every team's card?

Something to think about for 2013, Topps.

And, if you want to start running team photos again, think about getting IDs, too.

Matt Runyon said…
I think the best job on team cards was done in the 1974 set. The team card had the statistical information and then the team checklists were separate cards. It would be nice to see those again. The information on the back of the '56 team cards is great as well!
February 18, 2012 at 4:25 PM

dayf said…
I tell you to go to your happy place and you post... a Giants card? *head asplode*

Play at the Plate said…
I look at that like I look at vintage Yankees from that era. I dig 'em because they are awesome vintage cards and don't look at them with the same level of disgust as I do current Giants and Yankees. How awesome was it for the clubhouse custodian to get his place in history on that card? Well, awesome for him anyway.
February 20, 2012 at 2:17 AM