February 06, 2012
(There is nothing that will make me happier to see an NFL season end than the Giants winning the Super Bowl. I've suffered through this fate four times now, and it doesn't get any easier. Bring on the pitchers and catchers! Time for Cardboard Appreciation. This is the 133rd in a series): 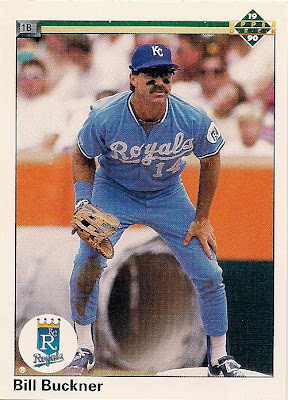 Upper Deck is known for making some vaguely snarky cards on the sly during their early days. The book "Card Sharks" documents some of it.

I haven't read the book so I don't know if this Bill Buckner card is mentioned. But Upper Deck seems to be making a rather obvious comment on this card that came out four years after Buckner famously let a ground ball go through his legs in Game 6 of the 1986 World Series.

Was Upper Deck yucking it up because they found a photo featuring a giant black hole between Buckner's legs?

If so, UD had a lot of company. Buckner jokes filled the airwaves back then. He was the subject of late-night jokes and the target of hecklers in the stands. After his career ended, he moved his family to Idaho and didn't make many public appearances. Death threats will do that to a person.

Then 25 years went by, and the mood changed.

Buckner has received a hero's welcome in Boston. The Red Sox have won two World Series since his error.

Buckner appeared in my town three days ago. With Mookie Wilson, the man who hit that ground ball in 1986. The two make a lot of appearances together now. They sign autographs at the same table together. They sign the same items together -- Bill Buckner's signature on one side of a jersey and Mookie Wilson's signature on the other side. They give speeches at the same dinners. They get paid from the same company.

Buckner seems to have come to terms with his place in history. He even appeared in an episode of "Curb Your Enthusiasm" last September, an episode that poked fun at his misfortune.

At the appearance in my town, Buckner wasn't all giggles and jokes. Not quite grim-faced, but all business. He signed a few items, he answered a few questions (he said the play was a bit overblown "if I had caught the ball, would the Red Sox have won the World Series? You can't even say that."). He said everyone in life must deal with setbacks. It's how you handle them.

But most of us don't have our setbacks aired repeatedly on television. Or indirectly referred to on baseball cards -- if that indeed was the case.

Which is probably why, at this signing, that Buckner opened up a beer before he started signing, and that bottle didn't leave his side.

If I was Billy Buck, I'd probably do the same.

At least he's making a little money off of the whole thing.

hiflew said…
I think I read that book a while back, or maybe I just read an excerpt (perhaps even here). What I remember is how someone set it up to where a Dodger was #666 for the first few years of UD.

I hadn't ever noticed the Buckner. It is quite humorous, but probably unintentional. Perhaps we are seeing something that wasn't intended, but sticks out due to another incident, the 86 Series in this case. Either way, the card and Buckner both deserve the appreciation.
February 6, 2012 at 4:58 AM

Captain Canuck said…
the sad thing is, he could quite possibly have made more money off of his misfortune, than he made during his career.
February 6, 2012 at 11:17 AM