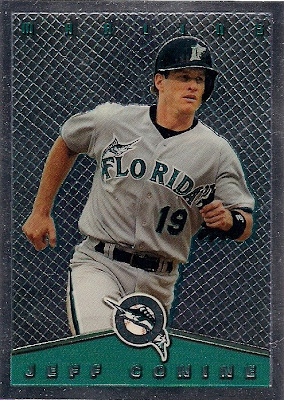 I have been intrigued by this card ever since I pulled it in 1995.

I was almost finished with card collecting in '95. It was the second consecutive year in which I grabbed a few packs in the spring and immediately lost interest. By '96, I was totally done and really couldn't be awakened from my disinterest for another nine or 10 years.

I think I bought two packs of Topps in 1995. I actually like the set a lot -- probably my favorite Topps base set of the decade. But at the time, I looked at the cards from a distance. I was out of touch with the game and the hobby.

When I pulled this Jeff Conine card, I stared at it for a minute, and I'm sure I thought "so this is what they're doing with cards these days." It was different. Shiny. It consisted of a material that I could not place. And there was a film over the front of it that said "peel and remove."

If I had known much about cards at the time, I would know this card was a direct reference to Topps Finest, which had debuted a couple years prior.

But I knew nothing about Topps Finest. Finest was sold at card shops, and there were no card shops near me. I had operated under the card collecting model of accumulating your cards from the nearest retail outlet since I was 9 years old. I had no idea that there were cards available that weren't available at your local drug store. And considering my attitude about collecting at the time, I didn't care anyway.

So I didn't know that Finest featured the same shiny sheen as this Conine card, or that Chrome was on the horizon, or that this card that I pulled was a one-per-BOX insert. I had pulled a one-per-box insert out of 2 packs of cards.

All I knew then was that the card was different.

Today, I was prompted to find the card again, by a post at Lifetime Topps Project. He's going through the details of the 1995 Topps set right now. And his one-per-box Finest Total Bases insert was Tony Gwynn.

So I suppose I did care a little.

Years later, I did pull off the film. And I did look at the back of the card, probably for the first time. 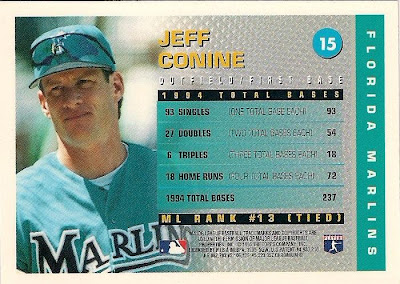 I love the math lesson provided so you can figure out how to calculate total bases. Not exactly calculating Offensive Wins Above Replacement is it?

A year after this insert set arrived, Topps Chrome debuted. Today, both Finest and Chrome are going strong, and I know each brand rather well. But this Conine card will always be my first.

carlsonjok said…
Given today's WTF moment up on Capitol Hill, I can only say it is a good thing you understood the proper use of protection with your first shiny.
February 16, 2012 at 7:41 PM

Anonymous said…
I feel like a bad US citizen considering I have no idea what moment carlson is mentioning!
February 16, 2012 at 11:04 PM

Two Packs A Day said…
I would imagine the WTF moment is extending the payroll tax cut without any spending cuts and thus quicken how fast we quit being Americans and become Chinese when China holds over 50% of U.S. debt.
February 16, 2012 at 11:55 PM

Play at the Plate said…
I like shiny. Like a baby likes a jangly set of car keys.

I won't get political, but any moment on any day on Captitol Hill is a WTF moment.

carlsonjok said…
Well, there was a big old clue in my comment, but to end speculation, the WTF moment was the picture of Darrell Issa's hearing on access to contraception in which only men were at the table.
February 17, 2012 at 6:38 AM