February 05, 2012
This week on the blog is going to feature several posts with mini cards.

I've received a bunch of card packages lately -- I am farther behind than I've been in at least a year -- and many of them contained cards that are mini in stature. That's not a coincidence as I've mentioned, oh, a couple of times, that I love mini cards.

But not all mini cards, and fortunately my fellow traders know this.

My favorite minis are 1975 Topps minis. After that are the Lineage minis that pay tribute to the '75 minis (on the card front anyway). After that are Allen & Ginter minis. I collect these even though I know right from the start that there is no chance that I will ever complete a set of them. Then there are a few other random mini sets that I like that I can't recall right now.

Minis that don't do anything for me fall smack in the era of overproduction. Those Topps minis from the late '80s with the "dream sequence" look are just OK. The wood-bordered minis from '87 are sort of cute, but definitely meh. The Fleer minis? Nice try, but you can't do what Topps did in '75. And those micro minis from the early '90s are just destined to get lost.

But the first minis of the week that I am showing are from Captain Canuck at Waxaholic, and they are minis that I didn't even know existed. 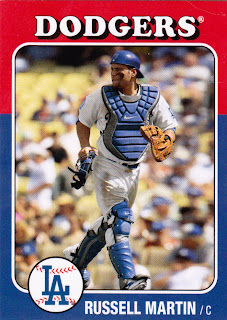 These are from 2009 Upper Deck. These are the cards that got UD in trouble because they resemble 1975 Topps, even though UD says they're OPC cards.

I remember the regular-sized cards that were inserts in '09 Upper Deck. But I had no idea there were mini versions, too. The minis are the exact same size as '75 Topps minis. Given their similarities to '75 Topps, I'm already hooked.

Once I get the massive '75 Topps and '75 Lineage mini completion quests out of the way, maybe I'll start on this one. 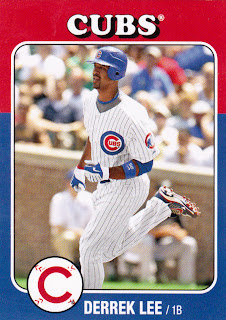 Look, the Captain wants me to collect it, too. He sent a random Cub from the set also. ... Oh, this is very dangerous.

Let's back away slowly and move on to some other non-mini cards he sent. 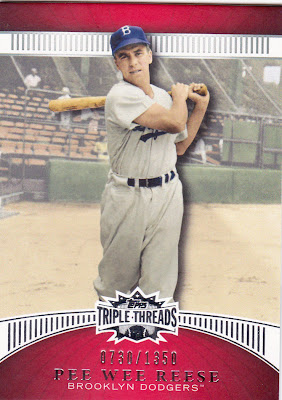 Perfect. Triple Threads. I have no intention of ever collecting anything related to Triple Threads. But I do appreciate a Pee Wee Reese card. This card isn't too bad. It doesn't have the horrid design patterns that I see on most Triple Threads cards. 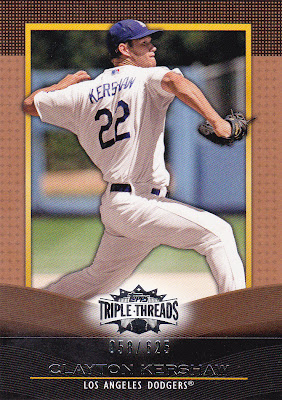 There's the horrid design pattern now. But Clayton overwhelms any frame that surrounds him with his greatness. This is the "sepia" parallel. But between you and me it's actually "brown."

The most unfortunate part of this card is that it mentions on the back that Kershaw's uniform number choice is related to Will Clark. But that's OK. Clayton is forgiven. 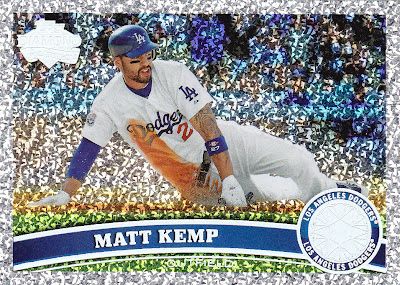 Did you all just do your Sparkly Kemp dance around the living room like I just did?

You should have. Try it when the Super Bowl gets boring later. It'll be the most interesting thing that happens tonight.

I was so excited to see this card. It's probably the most notable Dodger diamond parallel from last year that I still needed.

There are still others out there that I need though: Blake, Barrajas, Broxton, DeJesus, Thames and the Ethier/Kemp card.

OK, that's it for the first post of Mini Week.

Not all the posts will be about mini cards. I have to mix it up to keep things interesting.

Although I can't possibly see how mini cards would not be interesting.

Play at the Plate said…
I said it on the original post, I'll say it again. Kershaw is my favorite Dodger BECAUSE he liked Will Clark. Ha ha ha (maniacal laugh!)
February 6, 2012 at 1:02 AM