Mini week: one for the cause and others just because 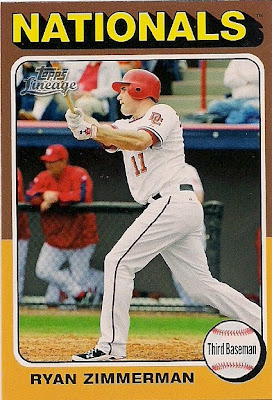 First, a message for Shelly.

I'm not interested in your free collectors zone, whatever that is. I'm not good in groups and I don't like people advertising on my blog. So I will keep deleting your come-ons all day (and all night) long.

OK, up above is a '75 Lineage mini from Cardboard Catastrophes. It's a card for the crazy cause of collecting all the '75 Lineage minis. I have a handful more on the way, but even with those I probably need like 85 more.

That's OK. This is a long-term project. Because I'm not collecting 2012 Heritage and 2012 Gypsy Queen and whatever else, I'll be slowly adding '75 Lineage minis. It's been a lot of fun so far. I love seeing that mini stack grow and picking it up and leafing through it ... I know part of that sounded dirty, but I don't know how else to say it.

Here's something to snap you back to reality:

Thrilling, eh? Those are three regular Lineage cards that I needed for my supposed quest to complete the base set. These also arrived from Cardboard Catastrophes, as he's the Lineage king.

I need four more cards, I think. I just don't care enough to check the list.

But I sure do appreciate these cards! Really!

OK, back to minis. 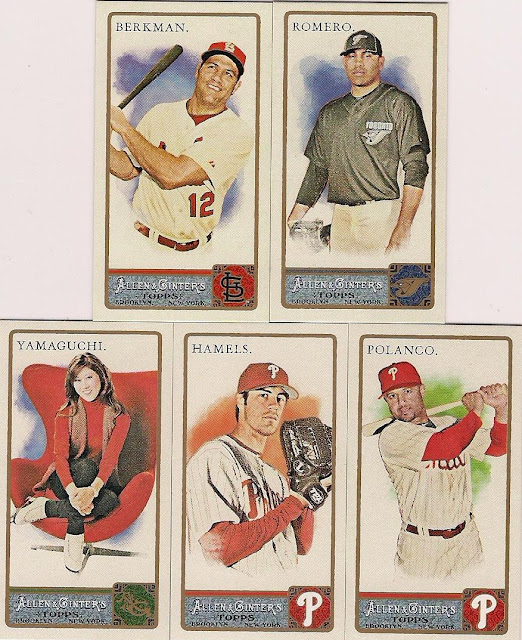 I picked up these minis from Cards From the Quarry. He was offering some tiny replicas of 2011 A&G, and I just can't resist offers like that.

I'm not even attempting to complete the mini set. I just think these cards are so cool that I have to grab them at random while I can.

My goal is to have more minis from this set than I have from any other A&G set. I accumulated the most in 2008, so I'm shooting to pass that total, whatever it is. As you can see I've mapped this out very carefully.

But that doesn't mean that any of these aren't available for 2011 Dodger A&G minis. Still looking for Broxton, Loney and Ethier. If you've got them, let me know.

I have to show one more non-mini card, also from Cards From the Quarry, before wrapping this up. 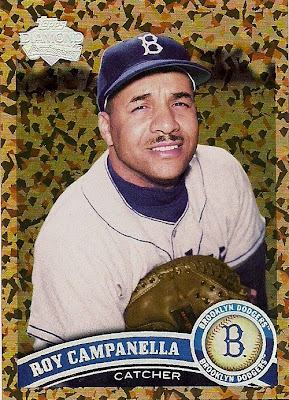 I was hoping my new scanner would scan these as they look in person -- like you're looking at booze in a glass. Unfortunately, they still have the camouflage look that you've seen before.

At any rate, I'm very pleased by this card.

Thanks for the cards. And thanks for liking my blog.