Rusty and the rest 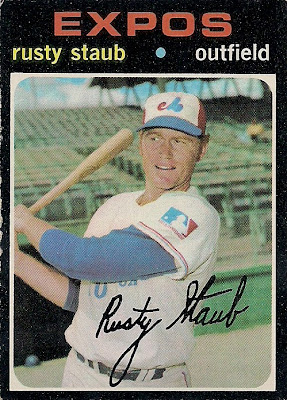 Here is the remainder of my COMC loot.

I'm starting with Le Grand Orange because this 1971 Topps card of him is the last time Rusty Staub would appear in a Topps set until 1974 (with one exception, as you'll see in a moment).

This has always intrigued me because there aren't a lot of cases in which a high profile player was cut out of a Topps set. In the few that there are, the reasons are well-known. Barry Bonds wouldn't sign the MLB licensing agreement. Jason Varitek didn't like the photo that Topps took of him. Maury Wills resented Topps for not signing him to a contract and became Fleer's No. 1 guy. And then there were the Topps-Bowman card brawls of the 1950s.

But I haven't come across a specific explanation for why Staub wasn't included in Topps' 1972 and 1973 sets. All I've heard was that Staub and Topps "had a falling out" or "couldn't come to an agreement." Why? There had to be a reason. This was before free agency and players weren't exactly clamoring to stand up for themselves in the financial arena. So ... why, oh, why?

This must have driven Mets fans crazy. The 1972 and '73 seasons were the first two years that Staub played for the Mets after being traded from Montreal in April of '72 (a silver lining: given the lateness of the trade, Staub may have ended up being airbrushed as a Met in the '72 set anyway).

Imagine having a new star slugger on your team and then your team going to the World Series (in '73), and the only card company in town didn't have a card of your player! I would have gone loopy.

Staub reappeared in the 1974 set. I think he's in it a couple times, both as a base card and in the World Series subset. And he showed up as a Met in the 1975 and 1976 sets, too. So all was probably forgiven by that point.

I'm sure there were very few collectors that noticed that Staub actually did appear in the 1973 set: 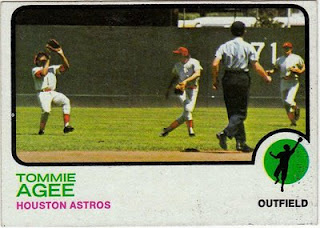 We've all seen this card before, and it was featured in one of my first posts. Agee is airbrushed from a Met into an Astros uniform. But so are his former Mets teammates, Bud Harrelson, center, and Rusty Staub, right. So that's your Rusty Staub card in the 1973 Topps set.

Getting back to 1971 Staub, the acquisition of that card means I'm 10 cards away from completing the 1971 Topps set.

If everything goes right, I'll wrap up all but one or two of those cards at the next card show in April. I'm getting giddy just thinking about it.

Speaking of giddy, here are the rest of the cards that I received in this package: 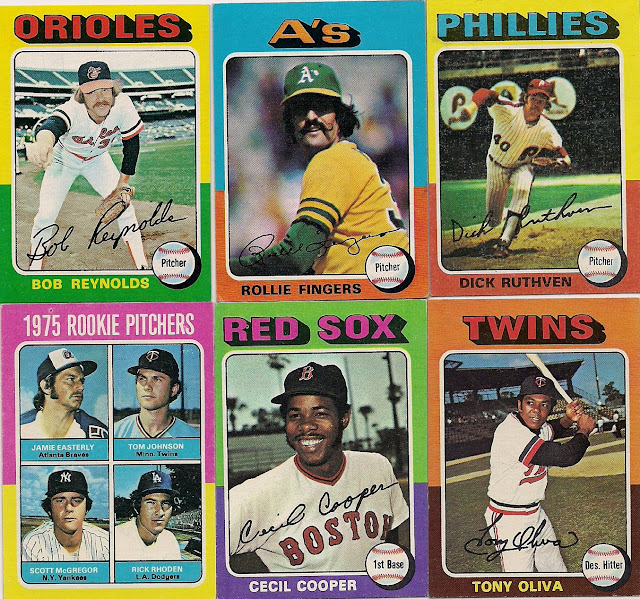 
Obviously, the top two rows are original '75 minis, and the bottom row is impostor Lineage minis. The original minis contain some of my favorite childhood cards from that set -- Rollie Fingers, Dick Ruthven, Bob Reynolds and Cecil Cooper, particularly.

The bottom three -- with their not quite accurate border color schemes (Eddie Murray is the one exception) -- are three more for the Lineage mini completion project. I'm at 113 now. 56.5 percent complete.

I'm about ready to hit birthday season, so cash for cards will be pretty tight. But I can't wait for April. For a variety of reasons.

hiflew said…
I had never seen the 73 Tommie Agee before. It is definitely an interesting card, although probably more accurately described as an abomination. I like it just for the uniqueness.
February 21, 2012 at 9:12 PM

steelehere said…
Alex Rodriguez was a notable Topps omission as well. He didn't sign a contract with Topps until 1997 because he didn't want Topps to have an exclusive on his Rookie Card by including him as a member of Team USA in their 1993 Traded Set.

Besides A-Rod, Kevin McReynolds and Danny Jackson both had rookie cards in 1984 but didn't sign agreements with Topps until 1987 (their first cards were 1987 Topps Traded) because they wanted more than the $500 that Topps offered for their trading card rights.
February 21, 2012 at 9:50 PM

MJ said…
I hated that Agee card as a kid! I was never sure which one was actually Agee. I assumed it was the guy catching the ball, but even my 5-year-old brain knew the card sucked.
February 22, 2012 at 7:24 AM