February 17, 2012
With the exception of blogging, I'm not feeling any aspect of card collecting right now. I can't get myself to send out my half of trades, or search for the necessary cards. I can't get myself to file cards or catalog them -- usually two of my favorite things to do. I don't even want to head out to the local Target and see what's not there.

I'm dealing with a semi-serious issue right now. How serious, I don't know. Could be trivial, could be life-altering, could be a warning shot across the bow. Everything's in limbo. Meanwhile, the not knowing is putting a damper on almost everything.

Except for blogging. Because as I've said many times, this is my oasis.

So let's get to the oasis, shall we?

But the cards are finally here. I'll show them sometime soon, but I wanted to show this one because I was looking forward to it so much: It's one of the 10 exclusive rookie cards from the 2011 Allen & Ginter glossy set. But Dee is the only rookie that I'm interested in owning.

I've been intrigued by this card and this set ever since I heard about glossy A&G because there is nothing about glossy that belongs with A&G, and A&G doesn't belong anywhere near glossy.

I was almost afraid of what I might get. I'm not a fan of those chromed-up vintage tributes. A chrome card of 1949 Bowman is just wrong. And as if recognizing its wrongness, the card often curls up on itself out of shame and remorse.

But surprisingly, this is an impressive, proud little card.

It's definitely glossy, which I know you can't experience by looking at the scan. It has the feel of those 1980s Topps glossy all-star cards. But the card is a lot more slick. In fact, when I hold it, it feels like it's going to squirt out of my hand like a bar of soap.

The other impressive thing is that the card is as flat as soda in the sun. Not even a hint of a curl.

That's because the card stock is similar card stock to what appears in your regular A&G set. 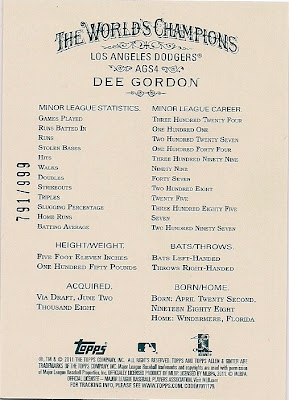 That's the back, with it's nifty gold-foil stamped number.

(P.S.: The weekend's here, that'll get me back in the spirit of packaging up cards!)

BASEBALL DAD said…
I didn't even know about about these glossies. I'll have to look into them.

Nachos Grande said…
How does one go about getting the glossy cards originally?
February 17, 2012 at 8:22 PM

Hackenbush said…
I only have one, also from my last COMC shipment. I think it was as cheap or cheaper than the regular card so I grabbed it. It will show up in a post down the road.
February 17, 2012 at 9:55 PM

Charles @ Hoopography said…
I went through a stint like that a few months ago. Hope this passes soon for you. This is such a fun hobby.
February 17, 2012 at 10:18 PM

Stealing Home said…
brother...had to brave typing those stupid indecipherable words to let you know i'm sending you much dodger love to get you through the funks and the troubles. may it be life altering in only positive ways.
now back to the oasis...
February 18, 2012 at 12:44 AM

Fuji said…
This hobby is my oasis too... and has been for the better part of my life. I hope everything works out in a positive light for you.
February 18, 2012 at 8:32 AM

As for the other stuff, go for a long nice walk somewhere, get those ednorphins flowing and take a look at things from the outside looking in...Once you have got a grasp on things...think to yourself...LETS GO! attitude is everything, just look at Pete Rose...
February 18, 2012 at 9:59 AM

dayf said…
Yipe. Not knowing sucks. I hate not knowing. Actually I love just flat out not knowing anything, it's the not knowing just the important bits that really really sucks. Get thee to your happy place and ride this out. Pitchers and catchers are about to report!

Anthony Hughes said…
"And as if recognizing its wrongness, the card often curls up on itself out of shame and remorse." that was very funny :)
February 18, 2012 at 2:28 PM

Play at the Plate said…
Cards and blogs aside, for the moment, I hope everything turns out ok. Cards and blogs no longer aside, I'm with you. It's a refuge from real life.
February 20, 2012 at 2:04 AM