February 17, 2012
(I have never felt more fragile than I have the last two months. I don't know what someone's trying to tell me, but I get it -- I'm not going to live forever. Now, please return me to my ignorant bliss. Time for Cardboard Appreciation. This is the 134th in a series): 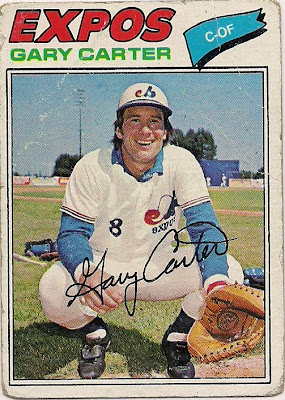 I remember being in sixth grade, sitting at my desk in the front row, slouched in my chair, staring at this Gary Carter baseball card.

Absorbed in thought, I admired the fact that Carter looked so happy. I liked this Gary Carter fellow. And somewhere in my 12-year-old brain I knew that I liked him partly because he was nothing like me.

Carter was happy and gregarious. He was talented and a leader. Smiling came naturally. He welcomed the spotlight and did well in it.

I was shy and wry. My baseball skills were already declining in comparison with my peers. I didn't lead in anything. They stuck the short kids in the back of the line.

Smiling was an unnatural act (just ask my mother the photographer). I instinctively shunned the spotlight and can think of a couple times when I performed miserably in it.

But Carter, was someone to admire. Someone I wasn't. And I did admire him. When he was with the Expos, he was a hero to National League fans everywhere, winning the All-Star MVP award twice and maintaining N.L. All-Star dominance. In 1981, he welcomed baseball back with his two home runs in the first game after the strike. In 1984, his home run in the second inning helped the N.L. to victory, erasing that awful defeat in '83.

I welcomed rooting for Carter in those games, because I couldn't root for him anywhere else. The Expos stood in the way of the Dodgers in 1981, and fortunately, Carter did not succeed.

When Carter was traded to the Mets before the 1985 season, he became the enemy. I rooted against him in 1986 and again in 1988. Carter was just as happy-go-lucky with New York, but I couldn't appreciate him at all. I didn't understand how he could hang around with his unlikable teammates.

Later, Carter played a year for the Dodgers, and I was happy to have him on my team, even if he was at the end of his career.

Carter was often characterized as a "too good to be true" individual. People who are too skeptical refuse to believe that people can be that happy and smile that much. Carter was accused of "false hustle" and obsessed with the spotlight.

That bothered me. I want people like Carter to exist. We need people who are positive and energetic and who can smile a lot. If everyone was morose and snarky, I wouldn't want to live in that world.

This world lost one of those positive people Thursday. It's not fair and it stinks.

I knew he was special a long time ago, slouched in my chair in 1977. I needed someone to look up to like Gary Carter. A lot of people did.

Rob said…
I gave hime some love too:

I was at his HOF induction to see Eddie Murray - he could not have been more happy or generous in his thanks and shout outs. Sad day for baseball.
February 17, 2012 at 6:59 AM

Kev said…
very well written. what has been interesting, living in the new york area, is that listening to sports radio in the last 24 hours, a lot of those old, "bad guy" Mets have been on the radio, talking about how they contributed to his "false hustle" persona because they were too misguided and immature to recognize that this is just who Gary Carter was - they couldn't recognize his "goodness" at that moment in time. But hearing strawberry and gooden speak infallibly of him yesterday, I think that in the end, they finally got it. and respected him even more for having to put up with their younger selves. hearing that has been fascinating...
February 17, 2012 at 7:54 AM

Anonymous said…
It has been really cool hearing about him on NY sports talk. Definitely a sad loss for the baseball world.

stoneski said…
I love this card, and I loved the joy he brought me in 1986.

Fuji said…
Wow... what a beautifully written post. I have no doubt in my mind that Gary smiled after he read it.

10th - Thanks for informing me that Carter played for the Dodgers... If that were a trivia question, I would have failed.

11th - His 77 Topps card is awesome. The white border, red Expos, and blue banner goes perfectly with the smiling & squatting Carter. I must purchase this card.
February 18, 2012 at 8:44 AM