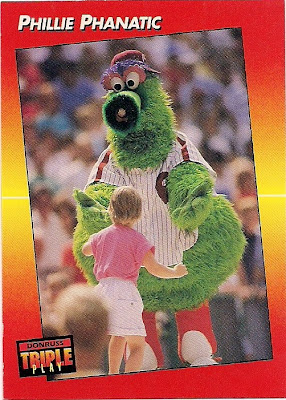 My updating on this blog could be intermittent, and my updating on my other blogs non-existent, while I deal with some life issues this week.

I don't know how long I'll be dealing with them, but here's hoping it's quick. Meanwhile I could use something lighthearted as a diversion.

There's not many sets more lighthearted than 1992 Donruss Triple Play.

I paid this set no mind in '92. Not to say I didn't buy any of it. I bought any card that dared show its wrapper in '92. My philosophy about cards then was "purchase it all, complete none of it." Well, the second part wasn't supposed to be part of the motto, but when you try to buy as many sets as they put out in '92 with the money that I made, you're not completing anything.

When I bought the cards, I don't think I really looked at them. Nothing from '92 stands out as memorable to me. Maybe Pinnacle. That's it.

If I was really looking at cards, I'd notice the photos in Triple Play, after I got past the borders that look like they came directly from Burger King. The photos are different, quirky and thoughtful. 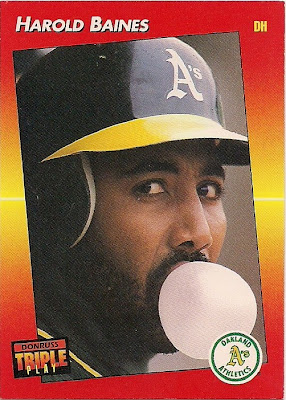 Triple Play was aimed at kids, I believe. Maybe that's why an addicted 26-year-old didn't give it the respect that it deserved. But look at this photo. It's great. How come only kids get pictures like that? 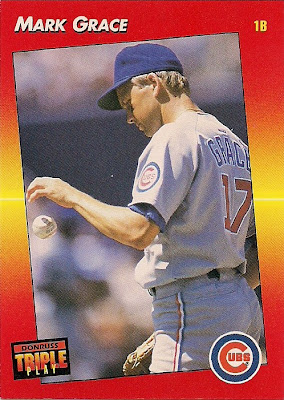 Many of the photos are your usual batting and pitching and fielding shots, but this photo shows that there is a lot you can feature that happens on the field between the play. Simple photo. But interesting. 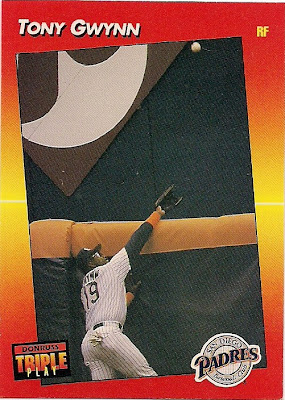 I know that Gwynn didn't catch that ball. I also know that is the old-style Phillies logo at the top left, but if you look at it differently it looks like a strange martian head staring out onto the field. 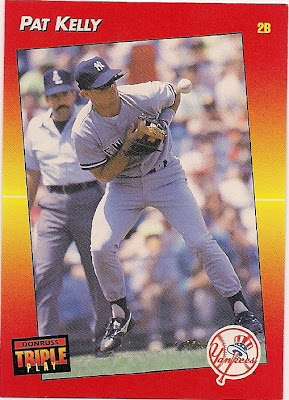 Another shot you don't see every day, but a play that you see maybe every other day. I'm going to say the runner was too fast for Kelly to recover in time. 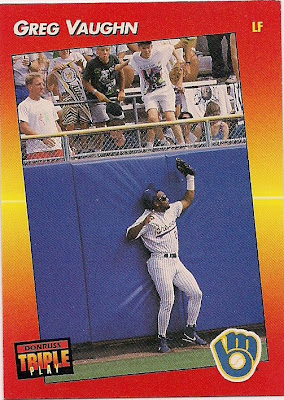 It appears that Vaughn has caught the ball, but never mind that ... Zubaz!!!! 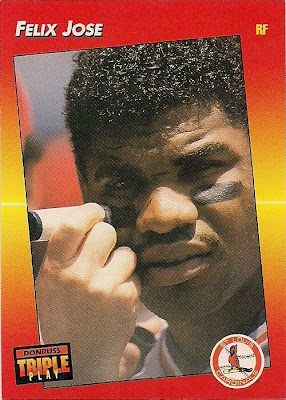 If I was a kid when this set came out, I'm sure I'd think they were drawing on him with magic marker. 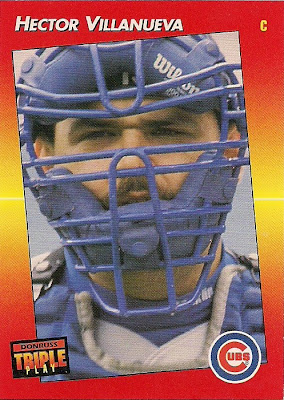 Would this make you want to be a catcher or avoid the catcher position at all costs? 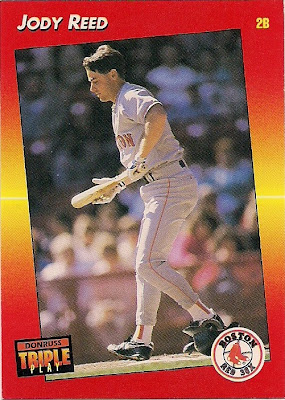 I always thought feature photos of players after they struck out was mean of card companies. Especially after the player has tossed his helmet in disgust. 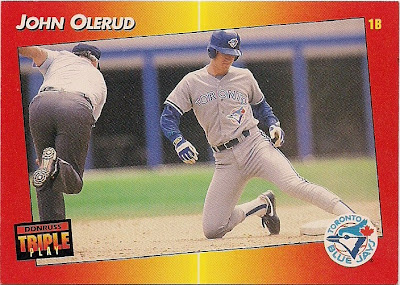 And this is too mean to believe. I'll just assume the umpire spotted a $20 on the ground and lunged for it before Olerud saw it. 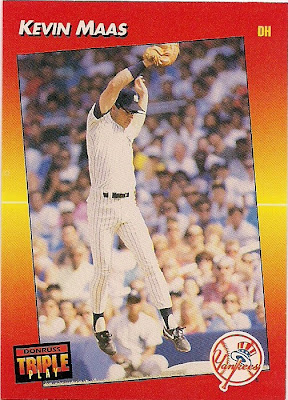 Now that's more impressive. I like the concentration on where the bag is. 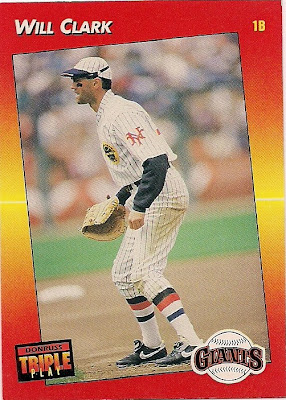 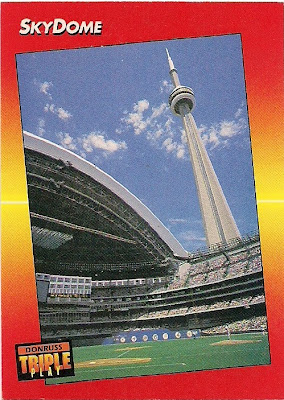 The Wrigley Field card in this set is an awesome night card, but this stadium shot is pretty cool, too. It reminds me of my visit there. Good times.

So there's some levity to start off your week.

Hackenbush said…
Stupid new, word proof thingies! Here's the one for this that sounds like what I'm thinking. "suspormnsmic"!
February 27, 2012 at 11:05 AM

Paul Hadsall said…
I hope everything works out; we'll be here when you get back.

I didn't appreciate the design of Triple Play when it came out (and I still don't, really), but I love some of the photos. One of my all-time favorite baseball cards is in this set - a trio of Mets pitchers are clowning around during batting practice, pretending that they are blocking a field goal attempt.
February 27, 2012 at 11:38 AM

Andy said…
I hope whatever you're dealing with goes as reasonably smoothly as you would hope.
February 27, 2012 at 11:52 AM

Most of the cards I have from this set are hand-me-downs from a friend who wasn't much of a collector. I remember him complaining about pulling a lot of Jay Bell cards, but I know for a fact that he passed along at least 4 of those Mark Grace cards.

Whenever I see a Hector Villanueva card, I remember Bill James referring to him as "Hector the Whale". Very mean, but also pretty funny.
February 27, 2012 at 12:15 PM

Wrigley Wax said…
Hope all goes well for you. The best thing about Hector Villanueva was hearing Harry Caray butcher his name. Every time it seemed like a different pronunciation. Holy Cow!
February 27, 2012 at 1:32 PM

dominicfdny said…
I too will be echoing well wishes for what you have going on and heres hoping its quick and hopefully painless
February 27, 2012 at 2:16 PM

dayf said…
Good ol' Helicopter Venezuela.
Good luck with the life issues, if you need any attack ponies to get through it you know who to call.

arpsmith said…
I will also echo the well wishes, hope everything goes as well as possible.
February 27, 2012 at 8:52 PM

Play at the Plate said…
I second...third...whatever the number is, I echo the sentiments of everyone else. I'll say a prayer for your situation, whatever it is.
February 28, 2012 at 1:02 AM

Fuji said…
What a great diversion... Donruss Triple Play had some of the coolest photos.

I have soooo many triple play cards from when I was a kid! My friend and I loved that set. My favorite is the Kevin Mass card, the shot of him making a play in the field, but listing his position as a DH.
February 29, 2012 at 8:52 PM

capewood said…
I bought a lot of Triple Play because it was the inaugural year and I thought maybe it would really catch on, like 1991 Leaf. Well, it didn't but I still have them. They were designed for kinds in one of several failed attempts in the early 1990s to bring kids back into the hobby.