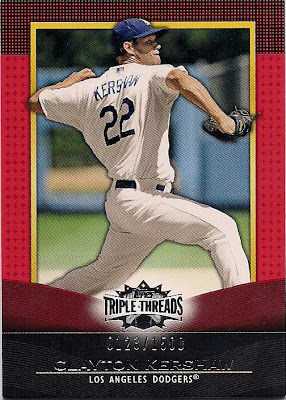 Pitchers and catchers report to Dodgers camp today in Arizona. What a glorious, fantastic day. That is if I was 2,500 miles to the southwest of where I sit.

But I celebrate in my frozen little corner of the world in what little way I can.

So my celebration of the arrival of another Dodgers spring training camp is to show off some recent Clayton Kershaw card acquisitions.

You remember, Clayton, right? Cy Young Award winner? Ace of the staff? The most dominant pitcher the Dodgers have had since maybe Ramon or Orel, but more probably since Sandy and Don?

Of course you do. I'm coming across more and more Kershaw collectors these days, and it's not because there are more Dodgers fans. People just gravitate toward star players. And that means Clayton's autograph cards and relic cards go for amounts that I don't want to spend.

Oh, who am I kidding? That's just a rationalization because people are selling Kershaw cards for triple what they're worth. Stinky capitalists.

But let's look at the cheap, pretty parallels, OK? It'll get your mind off price hikes.

All of these came from Check Out My Cards. I'll show you the non-Kershaws from this purchase later on today. 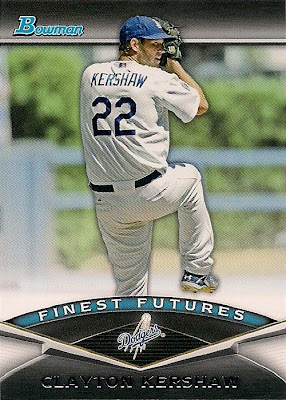 All right, not a parallel. This card and the Triple Threads Kershaw up top are the only non-parallels in the bunch. This is from Bowman's Finest Futures insert set from last year. Kershaw was well on his way to the Cy Young when this set was released. I'd say his future is a lot finer than some others in the set. 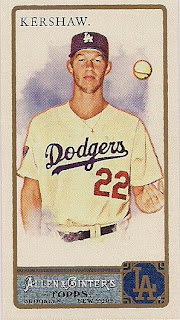 I've got to keep my streak of Kershaw A&G minis alive. This makes four straight years. I'd like to acquire all the variations of this card, too, but things are lot more difficult now than when I was hunting for Kershaws back in 2009. 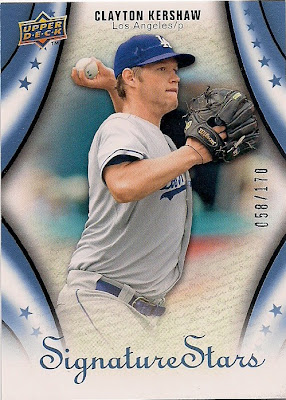 Who remembers Signature Stars? Who remembers Upper Deck? Did anyone know that there were blue parallels to this set? Am I asking too many questions? Do I care that you're annoyed? 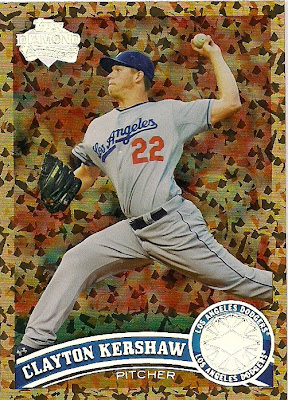 It seems like I'm adding a Dodger liquorfractor every day. Yet I'm about 50 cards away from completing the team set. Topps is diabolical. 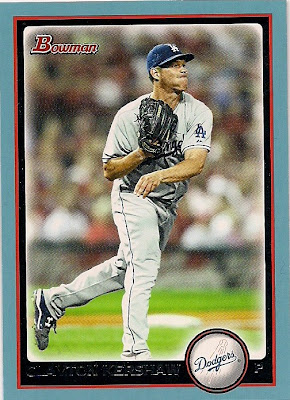 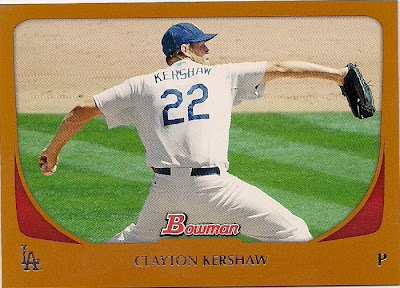 I wouldn't exactly call this orange. More like butterscotch. 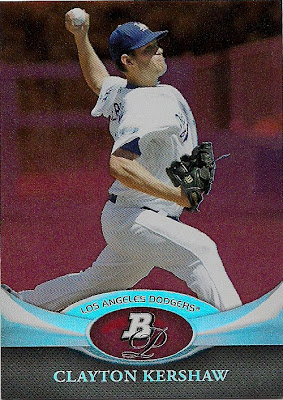 Final card. This is the ruby parallel of Kershaw's Bowman Platinum card from last year. It's very nice, even if it does remind me of all the cough syrup I drank last month.

With these Kershaw cards, I am now up to 189 unique Kershaws.

That's pretty good. But I want to eventually have more Kershaw cards than I have for any player. And Kershaw's got a long way to go to catch my Nomo cards.

But I'll start with the 200 milestone. I hope to hit that in a month's time.

Maybe No. 200 will even be an autograph.

Someone find me a cheap one. I got no time to scout for bargains.

Johnny said…
Those Orange boarded Bowman cards are in the words of Perry Caravello "The Ultimate". Love the look of them!