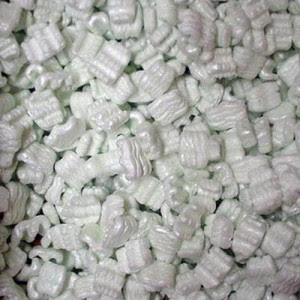 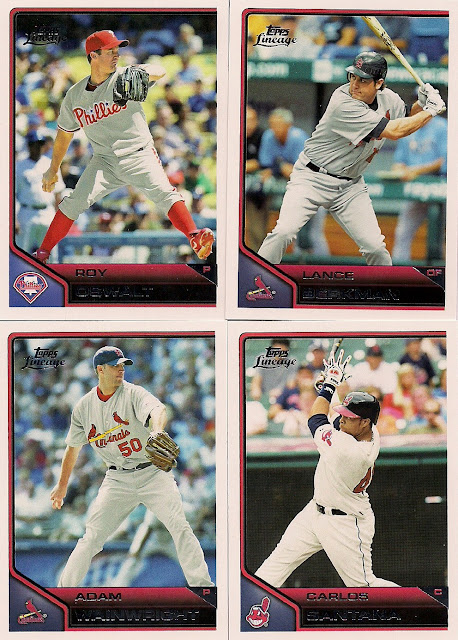 Those are the last four cards that I needed.

Lineage just edged out Allen & Ginter for the 2011 set that I completed first. I was really rooting for Allen & Ginter because A&G is better than Lineage in almost every way.

But Lineage vs. A&G isn't a fair fight. Lineage is 200 cards. A&G is 350. Lineage has no short-prints. A&G has 50. If I wasn't so ambivalent about the Lineage base set, I probably would've completed it long before A&G.

Instead, Kyle4KC of Jabo's Baseball Card Blog sent me the last four Lineage cards that I needed, while I'm still one card short of completing Allen & Ginter.

The last four cards sum up my attitude about Lineage. I've owned the Wainwright and Berkman cards before -- in fact I pulled them in my very first packs of Lineage -- but I have probably traded away half of the Lineage set because up until a couple of weeks ago, I had no intention of finishing it off. I think I had the Oswalt card, too -- I don't know, it's too hard to tell, all the Lineage cards look alike to me.

And speaking of looking alike, here's something to make you recoil in horror: 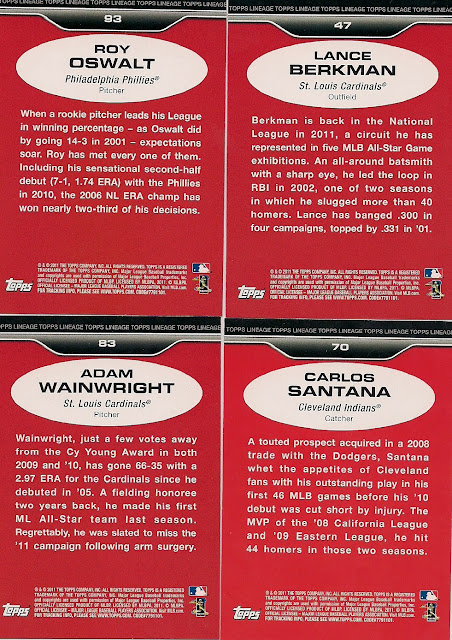 Lineage will never live down its card backs. I'm convinced that's the reason why Topps isn't producing 2012 Lineage (hopefully, its announced Archive set is an improvement on this set's concept). Of course, the real reason Lineage isn't around for another year is that collectors didn't buy enough of it.

I was the rare case. In my quest to complete the '75 mini inserts in the set, I bought way more Lineage than I should have. In fact, there are a bunch of rack packs hanging in the Target a few miles down the road that will disappoint me if they don't hop in my shopping cart the next time that I'm there.

Lineage wasn't all bad. I wouldn't have completed it if it was.

It had my favorite insert set of 2011. In fact, I liked many of the inserts in Lineage. The mix of legendary players is nice, including a few players that we haven't seen a million times. Sure, they did something wacky with the Sandy Koufax cards, but there isn't a set out now that doesn't have Topps' dirty tinkering fingerprints.

And I can't argue with a set with no shortprints.

So here's a half-hearted "yay!" for Lineage and for completing it.

Hey, at least it's not "no-hearted." There are plenty of collectors who want to burn this set in front of the state courthouse. I've only called it styrofoam peanuts.

LongFlyBall said…
I recently decided to chase the silk stickers cards from Lineage. If you have any for trade let me know.