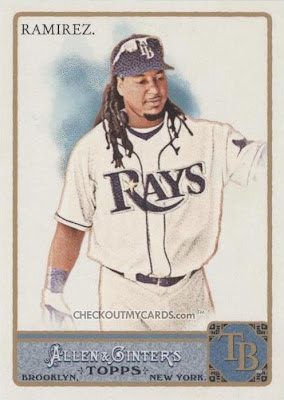 No, I haven't received the Manny Ramirez card already. The One-Card Challenge doesn't work that quickly.

It's just that the usual has happened.

I should never announce my set progress until I put that set into a binder. The binder reveals what the want list doesn't -- what cards I am REALLY missing from the set.

After placing my 2011 Allen and Ginter cards in a binder yesterday, I discovered to my horror (I have experienced this horror about 57 times, so I really shouldn't be horrified anymore), that there were two other blank pockets besides the Ramirez card at #316.

The second blank pocket -- #101 -- I filled easily, to my relief. Peter Bourjos was sitting in my dupes stack as I suspected. I was just happy that I hadn't traded it off.

The other blank pocket houses card #77. 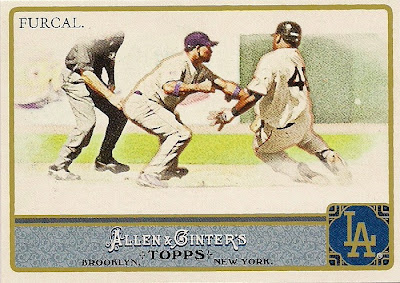 Of course, a Dodger card.

This card is already in my Dodger binder, which is why I'm not going to the One Card Challenge post and removing my Ramirez request. I still need only ONE card. I HAVE the Furcal card. I just don't have two of them.

As every team collector who also gets suckered into the task off collecting a set knows, you need two of every card that features your favorite team.

I know what happened in this case. I THOUGHT I had two cards already. 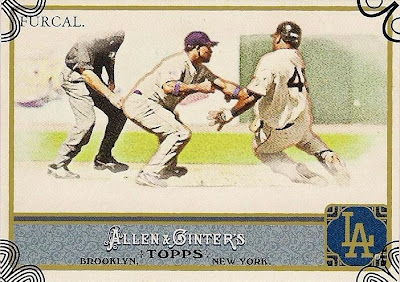 But it's actually one of those code cards, which is my least favorite part of Allen & Ginter easily. Will someone figure out this blasted code so we can never, ever do this again, PLEASE?

But even though I realized that I needed a second non-code Furcal card, I didn't sweat it. I figured it was in my large stack of Dodger dupes from the past year that I haven't organized yet.

But I leafed through them all, and it's very apparent that bloggers did not collect Allen & Ginter like they did in previous years. I found just one 2011 Allen & Ginter Dodger dupe. And it wasn't Furcal.

So, Rafael Furcal is back on my want list. Oh goody.

I'll probably take the one I have now and move it to my Allen & Ginter binder, just so I can keep the charade ... er, fact that I need only one card to complete the set going.

Me and my stupid completion fixations.

I have created a temporary (maybe) list on the sidebar of new card blogs, with links to those blogs.

Since I can't update my blogroll with new blogs, this list will remain until Blogger can fix whatever it broke.

If you have a card blog that isn't on either list, let me know, and I'll get it on the temporary list.

Andy said…
Sorry to post an off-topic comment, but I wanted to ask if you would update your link to my blog as we moved to our permanent domain at highheatstats.com (no more blogspot)
February 8, 2012 at 3:20 PM

night owl said…
Will do. I'll probably have to list the blog in the "new blogs" category as I can do absolutely nothing with the blogroll due to Blogger's current constraints.
February 8, 2012 at 3:28 PM