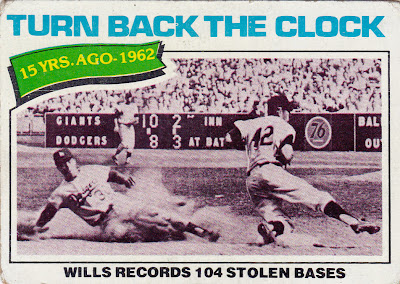 Sometimes I make things too difficult.

And by "sometimes," I mean a good three quarters of the pie.

It's one of my favorites from the 1977 Topps set. Why wouldn't I love a card of Maury Wills stealing a base against the Giants?

But in determining which game the photo was from, my logic became a twisted mess.

It started off well. Obviously, this was a game between the Dodgers and the Giants. Obviously it's in Dodger Stadium, thanks to the double tip-off of the famed field-level scoreboard and the Union 76 logo. And I assumed it was a game from 1962, the year in which Wills stole the 104 bases. I also assumed Wills was stealing third base, as the scoreboard was along the first base line.

But then I sabotaged myself. The score on the scoreboard is blocked from view, so I looked immediately to the uniform number of the Giants fielder. To me, it looked like No. 42. So I looked up who was number 42 for San Francisco in 1962.

It turns out No. 42 was a pitcher, Bobby Bolin. Bingo! I thought. All I needed to do was find some sort of weird play in which the pitcher would be fielding a throw at third base.

Yes, I know how ridiculous that sounds. I hadn't figured that out yet.

So I went through all of 1962 and the games in which Bolin pitched against the Dodgers at Dodger Stadium. Not only had he not fielded any plays at third, but he had barely pitched against Wills at the stadium. I started to look at other years -- you know, because card companies sometimes use photos that don't correspond with the time they're featuring.

But that wasn't working either.

Finally, I decided that the fielder couldn't be Bolin. So I looked up the Giants third baseman of the time, Jim Davenport. He wore No. 12. That must be No. 12, not No. 42.

I was making progress.

I then looked to the scoreboard. The Giants had 10 hits and two errors. The Dodgers had 8 hits and three errors. I proceeded to look up every Giants-Dodgers game in 1962 at Dodger Stadium that featured hits and errors that came close to those totals and also included a situation in which Wills stole third.

I finally nailed it.

On Oct. 3, 1962, the Giants finished with 13 hits and three errors. The Dodgers had eight hits and four errors. But most importantly, Wills stole three bases against the Giants at Dodger Stadium.

His last two stolen bases were second and third in the seventh inning. On the steal of third, the throw by catcher Ed Bailey got by Davenport (as you can see in the photo) and Wills scored to give the Dodgers a 4-2 lead. The play featured is actually Wills' 104th and final stolen base of the season.

This game also happened to be the final game of a special three-game playoff between the Giants and Dodgers. Los Angeles would piss it all away in the ninth thanks to Stan Williams' wildness (but Ed Roebuck didn't exactly help either), and San Francisco won the series to go on to face the Yankees in the World Series.

And then it dawned on me: of course, this would be the most likely photo to feature on this card. It was Wills' final stolen base, it was a big game and the only action photos available in those days were usually from major events. Look at the crowd. It is jam packed!

It was so obvious.

But you knew that already.

Matthew Glidden said…
Did you run across any oddities in those other Giants/Dodgers match-ups you came across?
July 11, 2011 at 9:13 AM

Anonymous said…
I looked in old newspapers to see if the Giants 3rd baseman wore #42 for any reason during that game... but I didn't catch anything about that. He certainly looks like he's wearing a 42 and not a 12.

Although you'll find it interesting that I found another angle of Wills 104th steal in an old newspaper just to the right of the headline. Appears to be jst a second or two after the photo on the card! Davenport's glove is way up in the air and from looking at the card, as he reaches for the wild throw. Very cool.
July 11, 2011 at 10:14 AM

I think that's the ball in the cloud of dust there. Not sure.

Nothing super odd. There were a lot of pitching changes in those Dodger-Giants games in '62. I thought that was interesting for the time.
July 11, 2011 at 12:56 PM