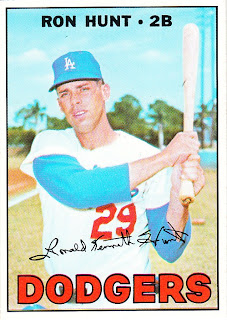 Although the '67 set is haunted by the usual '60s problem of hatless ballplayers, the design is before its time. It's a clean look with little obscuring the photo, something that you would see in today's sets. I like the team name anchor at the the bottom, and the simplicity of the player name and position at the top. It's just a simple, great-looking set. Some would say it's boring. I think it's a classic. 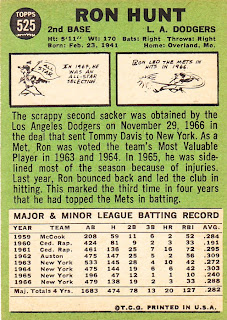 I'm not as fascinated by the backs. Don't get me wrong, they're pretty good. They're not at No. 29 for nothing. I do like an avocado green 1960s back, as noted with the '63 Fleer set. But I have this thing about vertical card backs. I much prefer the horizontal card back. I don't know why. I guess I just feel like I'm getting cheated out of information with the vertical back. 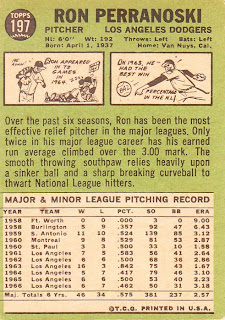 For the statistics, Topps couldn't even squeeze in "games" for the pitchers because of the vertical orientation. But it did supply winning percentage, which is something Topps scrapped in the 1970s. 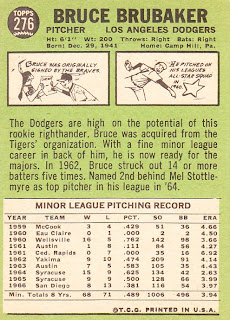 However, I quickly grew disinterested in the cartoons because they were so small. You practically had to squint to read them. Looking at the few '67 cards that I have, I can tell the cartoonist even had trouble producing anything interesting in such a relatively small space. 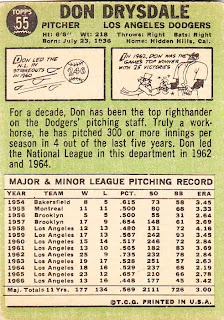 Is that spit sailing off of Drysdale's pitch in the left cartoon? Is Topps trying to imply something?

Anyway, like many of the card backs near the halfway point of this countdown, this one has its good and less-than-good points. The good is the traditional use of cartoons, info and stats with the '60s coloring and the added bonus of an extra cartoon. The drawbacks are the small size of the cartoons, the limited stats and the vertical backs.

We'll stay in the '60s for the next few spots in the countdown before getting to some of the more interesting backs.

I'm not going to select one as the vast majority of cards I have are Dodgers. But I have very few others.

Jim from Downingtown said…
Notice that Bruce Brubaker has no prior major-league experience, yet still gets a card.
February 24, 2011 at 12:41 AM