October 26, 2010
(Today is "National Mincemeat Day." Really. Have you ever had mincemeat pie? It's a combination of ground up beef, raisins, apples and rum. I had it when I was a kid. My grandfather liked all kinds of weird food. I've never had it since. Anyway, time for Cardboard Appreciation. This is the 87th in a series): 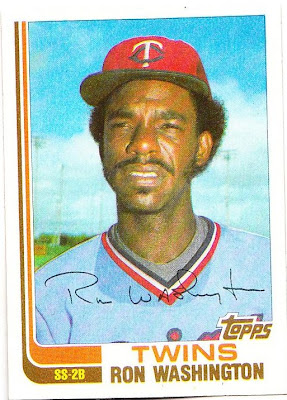 I waited forever for this guy to get a card.

Back in the 1970s, there were no cards of draft picks or college players or high school players. There were barely cards of minor league prospects.

Also, back in the '70s, players stayed in the minor leagues for a longer time than they do now.

Ron Washington was signed by Kansas City in 1970 as a graduate of their Baseball Academy. He was then traded to the Dodgers in 1976, still having never played in the majors. In fact, Washington's minor league resume is quite lengthy:

Sarasota, Waterloo, San Jose, Jacksonville, Waterbury, San Antonio, Albuquerque, a 10-game visit with the Dodgers in 1977, then back to Albuquerque, Aguila, Tidewater and Toledo.

During Washington's endless bus rides through the minors, I waited patiently. I knew about Washington years before his 1982 Topps Traded card arrived. That's because I had the 1978 Dodger Yearbook. It was the first yearbook I ever owned. In the back of the yearbook were two pages of Dodger prospects with accompanying photos. Dave Stewart. Rick Sutcliffe, Jeffrey Leonard. 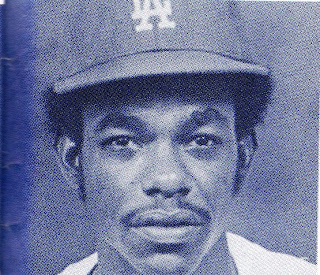 The impressionable youngster that I was, I thought that every player on those two pages would become a Dodger star. But there were certain players that I held special hope for, and Washington was one of them. In the write-up about Washington, it mentioned that he thought about quitting baseball until he was traded to the Dodgers. He credited L.A. for saving his career.

I couldn't help but like the guy for that.

When Washington was traded to the Twins in 1980, I was sad. Washington would never become a star for the Dodgers.

Then, obtaining his 1982 Traded card was bittersweet. I had finally gotten my card of Ron Washington. But he was wearing the wrong uniform.

Washington would appear as a Twin or an Indian on card sets of the mid-to-late 1980s, and it always seemed odd to see him in another uniform or even as a major leaguer. I always thought of him as a Dodger prospect.

Washington, as you know, is now the Texas Rangers' manager and is headed to the World Series for the first time (he was released by the Twins seven months before they would win the Series in 1987). He is one of several reasons why I want the Rangers to win the Series. I have a soft spot for both former Dodgers and for guys who spent 11 years in the minor leagues.

Washington is one of a handful of people in this year's World Series with Dodger connections. The Rangers and Giants don't associate with the Dodgers much.

Nobody on the current Rangers' roster has played for the Dodgers. But third base coach Dave Anderson won a World Series ring with the Dodgers as a member of the 1988 World Champions, even if he had only one at-bat in that Series.

As for the Giants, their most famous former Dodger is this man: 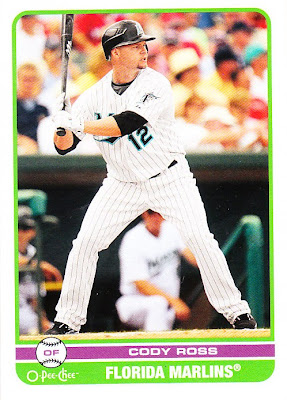 Cody Ross, not to be confused with David Ross who also played for the Dodgers, was in L.A. in 2005 and 2006. He didn't play much, and the Dodgers didn't get much when they traded him to the Reds in '06. But Ross had two rather fine seasons with the Marlins in 2008 and 2009, and I can't believe that 1) the Giants were able to pick him up on waivers; and 2) people are acting like he was no good before this postseason. I know nobody goes to Marlins games, but pay attention, please.

The other Giant player with Dodgers connections is reliever Guillermo Mota, who can stay a Giant forever as far as I care. The Dodgers better not acquire him for a third time, I don't care how desperate their relief situation is. Keep his nasty PED-using self in a Giant uniform where he belongs.

On the coaching staff is first base coach Roberto Kelly, who spent one season with the Dodgers in 1995. That doesn't explain why I have like 25 cards of Kelly in a Dodger uniform, but I guess it WAS the '90s.

The Giants' ex-Dodgers just can't compare to the nostalgic moments evoked by Anderson and, especially, Washington. 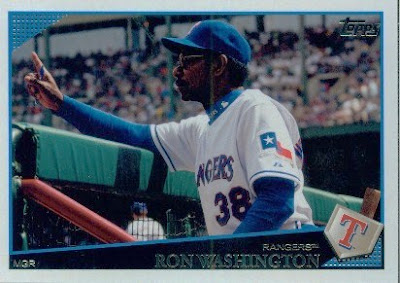 I've been rooting for you a long time, sir. I hope you win. You've certainly worked long enough and hard enough for it.

Eggrocket said…
Okay...you may've tipped me. I've been trying to figure out who to root for this year. My teams are the Red Sox (in the junior circuit) and the Dodgers. And while I can't stand the Red Sox' arch rival the New Yerk Jerkies, I've never developed a strong hatred of the Dodgers' nemesis, the Giants. (In addition to still being awe-struck by Willie Mays, I developed a mild interest in the Giants after picking up Buster Posey in two of my fantasy leagues this year and watching him wail on opposing pitchers.)

Usually when I run into a dead-heat like this I'll pull for the National League. But maybe this year I'll pull for Washington and the Rangers.
October 26, 2010 at 11:16 AM