October 20, 2010
(The following card and post appeared on the Baseball Reference Blog this morning. It's my second "Card of the Week" post. I'm appreciating the chance to contribute to the site, no matter how sporadic it might be. Time for Cardboard Appreciation. It's the 86th in a series): 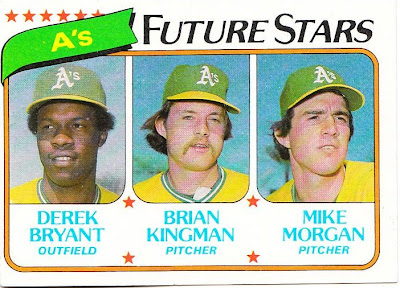 The 1978 major league baseball amateur draft is known for a few things. The first four players drafted, led by No. 1 pick Bob Horner, went on to All-Star careers. Meanwhile, Cal Ripken Jr. wasn't selected until the second round. Ryne Sandberg wasn't picked until the 20th.


But today the focus is on the fourth overall pick of that draft, pitcher Mike Morgan.


There was no doubt that Morgan was going to play in the major leagues. As if to underline that statement, the team that drafted Morgan, the Oakland A's, started him in three games the very year he was drafted. The following year Morgan pitched in 13 games and had a 5.94 ERA.


But instead of that being the ruin of his career, Morgan went on to pitch in the major leagues for 22 seasons. He finally hung up his spikes in 2002.


My fascination with Morgan concerns his baseball cards. I often wonder whether Morgan was featured on a baseball card with more teams than any other player. I'm not sure how you prove that. There are other rivals to Morgan's potential title who spring to mind. Bob Miller, the much-traveled 1960s pitcher, threw for 10 different teams. Kenny Lofton, Terry Mulholland and Royce Clayton each donned the uniform of 11 different teams.


But Morgan pitched for 12 teams. He started out with the A's -- appearing on this 1980 Topps Future Stars card with future 20-game loser Brian Kingman and 39-game major leaguer Derek Bryant -- and ended with the Diamondbacks in 2002. In between, he pitched for the Yankees, Blue Jays, Mariners, Orioles, Dodgers, Cubs, Cardinals, Reds, Twins and Rangers.


I found cards of Morgan featured with 11 of those teams. The only one I couldn't find was Morgan in a Reds uniform. There has to be a card of him as a Red. He pitched for them in 1996 and 1997 and there were countless card sets issued in the late '90s.


If there is a Morgan card of a Red, then that could make Morgan the player to appear on a baseball card with the most different major league teams. He would have Lofton, Mulholland, Clayton and Miller all beat.
(Note: A baseball-reference reader found a card of Morgan as a Red).


There is only one other player that I can think of that might match him. Matt Stairs has played for 12 different teams with his 2010 season with the Padres. His time with some of those teams was quite limited, so I have my doubts that he appeared on a card with each team. But it's possible.

Anonymous said…
I do have a Morgan card as a Red, I believe. Of course, the cards are in MN and I am not, right now.

Fuji said…
I remember having that 80 Topps card in my collection. As an A's fan, I definitely remember Kingman and Morgan, but I've never heard of Bryant.

Though he lost a bunch of games for Seattle--who didn't, in those years--I always rooted for Morgan. Really glad he finally picked up a ring in Arizona.
October 20, 2010 at 1:21 PM

steelehere said…
Ron Villone pitched for 12 different teams during his career from 1995 to 2009. They were the Mariners, Padres, Brewers, Indians, Reds, Rockies, Astros, Pirates, Marlins, Yankees, Cardinals and Nationals.

The fewest games he pitched for any one team was 22 in 2001 for the Rockies (though he was traded during the season) so there's a chance he's pictured on twelve different teams on his baseball cards as well.
October 20, 2010 at 2:35 PM

night owl said…
I'd put Villone in the Matt Stairs category -- the pinch-hitter/relief pitcher. They tend to get overlooked in modern sets. Still possible, though.
October 20, 2010 at 2:40 PM