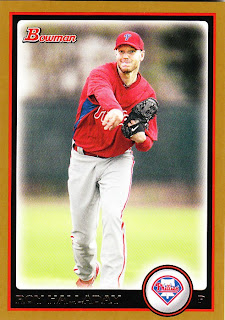 I try to dwell on the positive sides of the Dodgers in the postseason. Kirk Gibson. 1981. Koufax. The '63 sweep. Charlie Neal. Johnny Podres.

I attempt to avoid the negative sides. Tom Niedenfuer. Gary Matthews. Reggie and his hip. Joe Rudi. The '66 O's. Wait 'Til Next Year. Mickey Owen.

The most embarrassing part of the Dodgers' postseason history is something I have rarely mentioned on this blog. That's because I don't like mentioning it. It's the matter of that little no-hitter that Don Larsen threw in the 1956 World Series. It was the only no-hitter in postseason play, and it came against the Dodgers.

I wasn't alive then, but damn that must've been embarrassing.

When I watch clips of the game now, I feel anger as I watch pinch-hitter Dale Mitchell get called out on a third strike to clinch Larsen's no-hitter, also a perfect game. Mitchell insisted until his dying day that the pitch was a ball, and it looks very obvious from the film that it was a ball, too.

But the no-hitter remained and it remained the only one for 54 years until tonight.

Congrats to Roy Halladay on his no-hitting of the Reds in his very first postseason appearance. It couldn't have happened to a finer pitcher, and seemingly a finer person. I now understand why everyone wants your cards.

Thanks for getting the Dodgers off the hook after all these years. I guess I should thank the Reds, too, for joining the Dodgers and their fans in the Ignominy Club.

But at least I don't have to see that damn non-strike being called a strike quite as often anymore. Now, when they talk no-hitters in the postseason, footage of Brandon Phillips dribbling the final pitch into the infield and getting thrown out will share the spotlight with Dale Mitchell.

Join me in the club of shame, Reds fans.

It's not all bad. At least your team is in the postseason.

As for you, Halladay, save some of that for the Yankees.

flywheels said…
Who says the Phillies or Yankees will make it to the WS? I'm pulling for the Reds b/c I don't want the Braves to have to face them again!
October 6, 2010 at 9:06 PM

Anonymous said…
It's only one game.

madding said…
I'm pulling for a series no-hitter, even though I really don't like the Phillies. The Reds deserve it.
October 7, 2010 at 3:24 AM

Anonymous said…
As a Reds fan, that was demoralizing. My friend bet me (with acceptable odds) that his Cleveland Indians would score the same number of runs as the Reds this postseason. Yesterday, I received a text asking if I wanted to up the anted and change the bet to hits.