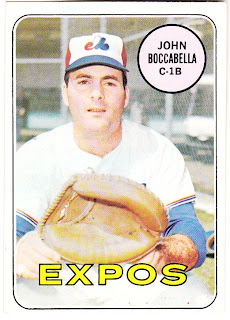 (Note: This post appeared today on the Baseball Reference Blog. It's my first contribution to the "Card of the Week" feature).

The design chosen each year for a baseball card set can often determine whether collectors love, hate or remain ambivalent about that set.

One aspect of design is how that design enhances or interferes with the photo on the card.

Some of you might know that the 2008 Topps set was notable for a particular design flaw. The “bump” that featured the Topps logo and jutted into the top portion of the card photo affected how Topps displayed the photos on its cards. Often, the photo images were shrunken so the player’s head would not be covered up by the Topps “bump.”

That particular set got me thinking about whether there were other sets in which the design forced Topps’ hand as to how it displayed its photos. I quickly scanned Topps flagship sets over the years. I found out that, in most sets since Topps went with photography over illustrations, the design has not affected photo selection or positioning of the photo.

Topps’ decision to superimpose the colored circle, which contained the player’s name and position, onto the photo required a significant adjustment. You can see it with the John Boccabella card. If you removed the colored circle, what would you have? You would have an obvious off-centered photo. In most case, an off-center photo would never fly as a choice for a player’s card.

But for 1969 Topps, an off-center photo was REQUIRED in many cases. I went throught the set again today and there are 77 examples (I may have missed a couple) in which an off-center picture was created so Topps could position the colored circle and not cover up a player’s face.

The ‘69 set had several issues, mostly related to major league baseball expansion that year. Blacked-out caps and hatless players run rampant through the set. But the off-center photo phenomenon was a self-imposed issue.

Topps must have been so scarred by that design flaw that it chose designs that did not interfere with the photo for the next 40 years. Then 2008 came along and the bump reared its ugly head. 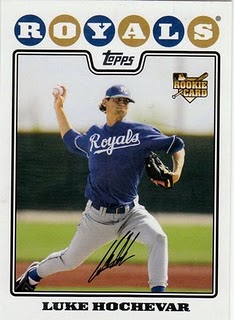 Anonymous said…
While I like the overall design of 2008 Topps, I do now realize that many players are teeny-tiny.

But would you rather have that, or some of the Stadium Club and Upper Deck photos where you can see the acne scars and nose hairs?

Anonymous said…
I never thought about it, but you're dead on about the '69 off-centering. Take a look at one of my TTMs...

Ray is way over to the left. It looks like they probably had a good photo, but then had to crop it so that the yellow circle wouldn't cut off his head.
October 13, 2010 at 2:29 PM