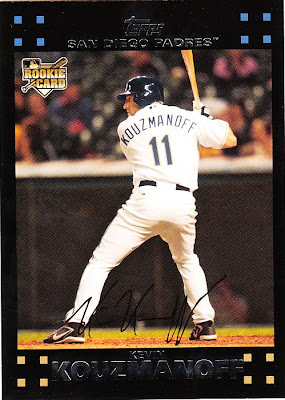 I admit I am quite enjoying the fact that the Padres are not in the playoffs. I knew they weren't good enough, and I didn't appreciate their fans laughing at my Dodgers.

Unfortunately, the Padres' demise benefited a team that I despise even more. I dislike the Giants so much that I am actually rooting for the Braves, an activity I can remember participating in maybe two other times in my life.

But that's the way the postseason works sometimes. You root for some strange teams, and you hate yourself when it's over.

Recognizing that the Padres and my team, the Dodgers, are now both battling for tee times on Southern California golf courses, I've decided to dedicate my next "team colors" post to San Diego. What the hell. Let's let bygones be bygones. That is, if you can consider ripping a team's choice of colors as patching things up.

San Diego is one of those teams that did a complete team color overhaul in midstream. Normally, I do not like that. It's an instant sign that your team is maybe not on the varsity level. But with the Padres, I understand completely. They couldn't possibly stay with brown-and-gold forever. Eventually they would have been ask to leave the league just on their color scheme alone. I mean that stuff was acceptable in the '70s, but not now surfer dudes.

So, the Padres have had two basic colors schemes in 40-plus years: brown and gold, and their current scheme of dark blue and whatever other color that is. I'll call it beige.

Topps has done an excellent job representing the Padres' colors over the years. In fact, it must have had a surplus of brown ink back in the '70s because unlike other teams, Topps matched San Diego's colors almost year for year.

Here is the breakdown for each year that Topps determined its colors based on the team:

OK, here's the thing: The Padres have worn so many color combinations and variations of individual colors that I separated the color categories into as specific of a color as I could. That's why I didn't lump all the blues under "blue" or lumped the golds and oranges under "yellow."

If I had lumped all the blues together, then "blue" would definitely be one of the top two colors. But that's not the way it's going to work around here.

So, without further malarkey: 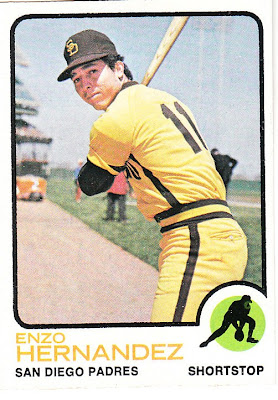 Sorry, Padres. You can't erase the past.

Doc said…
I believe the "official" team color is sand, not beige.

I prefer the old yellow and brown combination. Those 1976 uniforms are awesome in my eyes, and are what I grew up with.

Now, the mid-80's version with a touch or orange. Bleeeeeech.

Finally, at least the Padres were more deserving of a playoff spot this year than the Dodgers! I'd rather my team over-perform than under-perform. Now THAT is a waste of talent. :-)
October 11, 2010 at 6:07 AM