No cash for flash 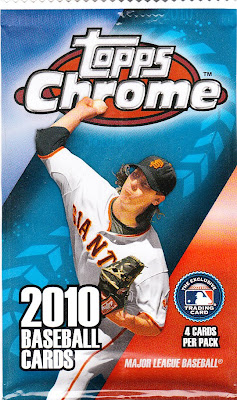 I have no money for cards. In an effort to have even a couple of $20s to rub together at the card show at the end of this month, I have banned myself from buying any cards this week and possibly for the next two weeks. I also have banned myself from group breaks and cut down greatly on shipping trade packages through the mail.
I hope the commissioner will grant me leniency and allow me to slip a few trade packages through the mail next week. I have a feeling that will happen.
But on the card-buying front, the commish is not budging.
I zipped over to Wal-Mart yesterday because I saw 2010 shiny, all back-lit and blingy, on the blogs of people who obviously have more money than I do. Shiny will get me to do all kinds of crazy things, including braving the People of Wal-Mart on a holiday weekend.
In the card aisle I saw loads of 2010 Chrome. And I couldn't buy any of it. There were BOXES of chrome. Not blasters. BOXES of 24 packs of 2010 Chrome. Yours for only $71.84. Even in days of positive cash flow, my conscience won't let me buy anything for $70 at Wal-Mart unless it is computerized or features 26-inch wheels.
I couldn't even buy one of the many beautiful chrome blasters. I can't spend $19.99 in one shot either.
But I could afford a "value" pack. Barely. I bought one. For $8.98. That's almost 60 cents a card. I feel so thrifty.
You know the deal with these, but you don't know them on my blog, so here is the pack. The three orange refractors first: 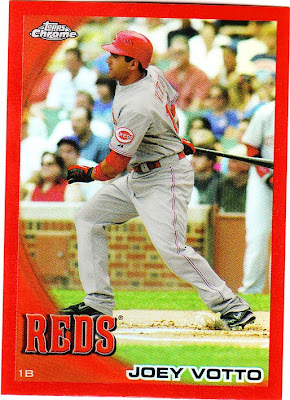 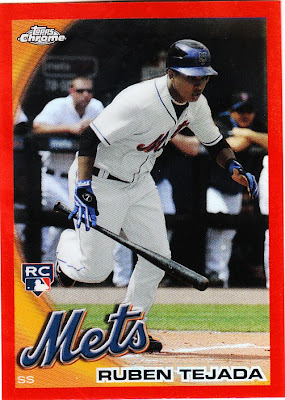 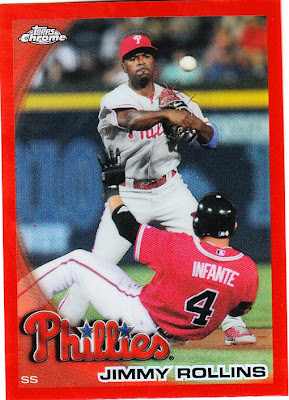 The Ruben Tejada photo is different from the one used in the Topps base set. None of these cards are of players I want. If people have Dodger versions of these, I will trade.
Onto the packs:
Pack 1
#114 - Robinson Cano, Yankees 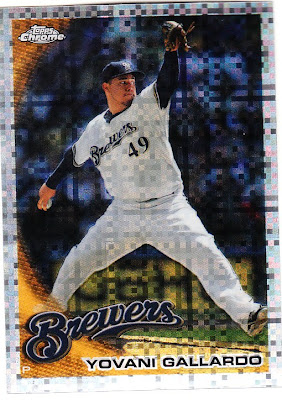 #58 - Yovani Gallardo, Brewers, refractor. I've read collectors referring to these as the xrefractors. They do look like those, except that the shiny squares are MUCH more apparent than they used to be. Also, the back of the card no longer mentions that it's an "xrefractor." It just says "refractor." I'm wondering if this is a new variation of the refractor. 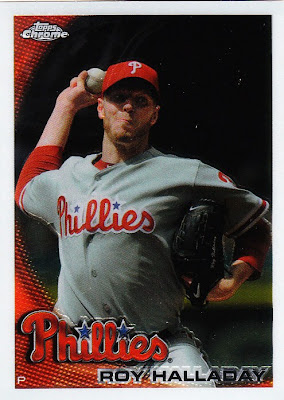 #64 - Roy Halladay, Phillies. Best card in the value pack. This is a new photo of Halladay. I plan to keep this card.
#77 - Akinori Iwamura, Pirates. Also a new photo, as he was photoshopped into his Pirates uniform in the base set.
Pack 2
#151 - Aaron Hill, Blue Jays 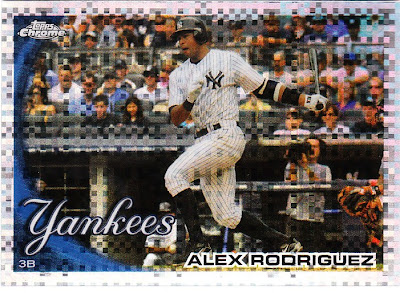 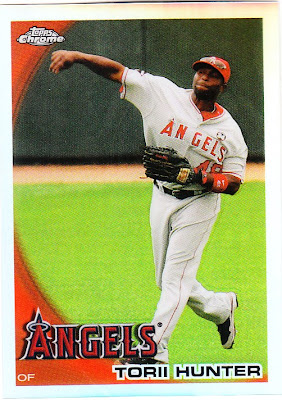 #115 - Torii Hunter, Angels. This is your common variety refractor
#211 - Sergio Santos, White Sox
#205 - Ian Desmond, Nationals
That's it.
No Dodgers. Definitely not as lucky as this value pack. But shiny is always a good time.
Unlike the last two years, I will not be attempting to complete this set. In fact I don't plan to buy very many 2010 cards for the rest of the year.
Sorry, but the commish has spoken.

Nachos Grande said…
I hear you - I haven't bought a single pack of cards for myself since my Ginter madness. I am hosting a group break though - so at least I still get the joy of opening packs...even if I am mailing off most of the cards!
October 9, 2010 at 1:51 PM

flywheels said…
I feel your pain. I've gotten way too use to dropping last second bids on eBay auctions that the $$ I've spent exceeds what I want to spend on cards. I too need to take a break for awhile.
October 9, 2010 at 3:20 PM

gritz76 said…
You know whats fun to do with Chrome. Lay 3 cards on the counter and leave them there for a week and see what kind of different warped shapes they morph into. I left a pack out the other day and now I can't even stuff them into top loaders! You'd think they could fix this little quirk?
October 9, 2010 at 3:24 PM

Anonymous said…
I hope you are not referring to the card show at the Fairgrounds. It is tomorrow not at the end of the month. Following your blog I know you do attend the one at the fairgrounds if you don't fight the snow. But if this is the one you are saving for it is tomorrow with Doc Gooden supposedly appearing. Just a little FYI.
October 9, 2010 at 7:42 PM

night owl said…
They're throwing a card show in the middle of Super DIRT week? Well, they've just lost a customer. No way I'm going to drive all that way and then fight that zoo. I'll spend my cash online.
October 9, 2010 at 9:12 PM

deal said…
I think that may be the first Card of Hallday in a Phils Uni that is not either a PhotoshopModification or an artist re-interpertation.
October 10, 2010 at 12:16 AM

Jeff Bunnell said…
My son would love that ARod...I could send a whole bunch of various Dodgers your way...email if interested: Jlbun@juno.com
October 13, 2010 at 8:36 PM