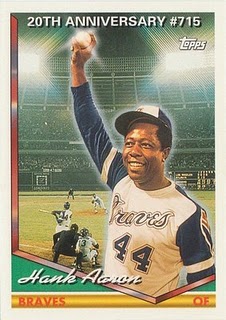 Despite the campaigning efforts of Play at the Plate, the prediction of AdamE of Thoughts and Sox was right. The Bo Diaz night card did not win the most recent round of the Awesomest Night Card Tourney.

You don't mess with Hank. You just don't.

It was an interesting round, and Diaz stayed with Aaron for awhile, but Hank was just too tough.

Here are the voting results:

Diaz may show up in the next round if I need to fill out a bracket. It deserves another shot. 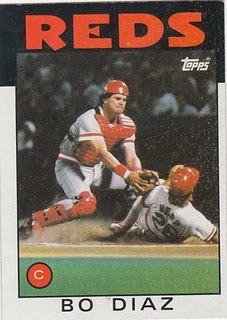 But for now, Aaron is the only card of the six to definitely move on to the next round. And that means it's time for Part 6.

The candidates aren't as interesting as the most recent group, but there are still some of my favorite night cards in there. Here they are: 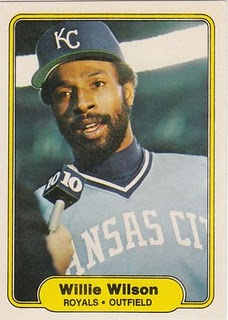 1982 Fleer Willie Wilson: One of my all-time favorite night cards. You can't beat the postgame interview, under the lights, on a card. Wilson was still a sensation at this point, so it was always cool to pull a Wilson card. 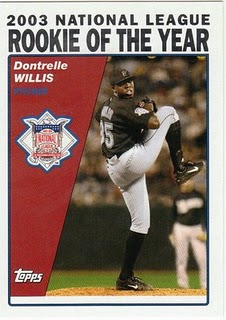 2004 Topps Rookie of the Year Dontrelle Willis: Remember when Willis was headed to the Hall of Fame? No? You fans are so fickle. Anyway, a night card of the formerly great Willis is cool. 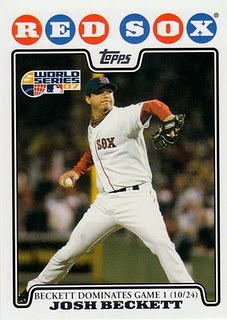 2008 Topps World Series Josh Beckett: These randomly inserted World Series cards in '08 Topps were strange. But I'm still a fan of Beckett. The guy pisses off Yankee fans. That's entirely all right with me. 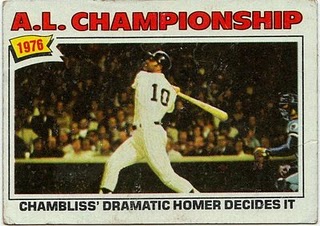 1977 ALCS Chris Chambliss: I would assume this card would win, unless all the Yankee haters band together. I love postseason cards from back when, especially when they capture a moment in time. 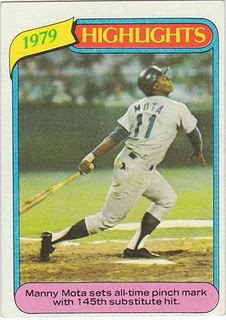 1980 Topps Highlights Manny Mota: A personal favorite night card of mine, even if the photo is all wrong. Mota is playing at night on the road. His pinch-hitting feat came during the day at home.

Those are the contenders this time. Please vote on the sidebar. Remember, the card that finishes first overall at the end of the tournament will get the prime real estate in my now empty night card binder.

Charles @ Hoopography said…
I am a Yankees fan and would like to go with the the '77 Fleer, but I like the '04 Topps Willis card. His rise and recent struggles are interesting. He was so dominant a few years ago.
October 24, 2010 at 9:26 PM

steelehere said…
Still having a tough time accepting the Aaron victory (over Diaz) and would like to see Diaz in the next round. The Aaron card is really a designer "Night Card" because Topps' designers enhanced the original image by adding a second image that includes a glisening baseball. Additionally, the card came out twenty years after the fact.

Topps dropped the ball in their 1975 Topps set by not using the home run image on Hank's highlight card since it blows away the actualy image they used in the set.
October 25, 2010 at 12:12 AM

Play at the Plate said…
I demand a recount! I expect there were several hanging chads or something. As for this round, you may have heard that I'm a Yankee hater, but that Chambliss card is awesome and gets my vote. Like you, I really like when you know exactly when the picture on a card was taken.
October 25, 2010 at 4:00 AM

Greg said…
I went with Willie Wilson, as I suspect that could be a KAKE 10 microphone that's interviewing him. KAKE was/is the ABC affiliate out of Wichita, KS and is also the station I watched while growing up in southeast Kansas in the 90s.
October 29, 2010 at 5:29 PM