October 07, 2010
(Welcome to another day of getting nothing done, otherwise known as "postseason time." I had the day off yesterday and was within earshot of the TV for 11 hours. Today I work and I'll get next to nothing accomplished. Yay postseason! Time for Cardboard Appreciation. This is the 84th in a series): 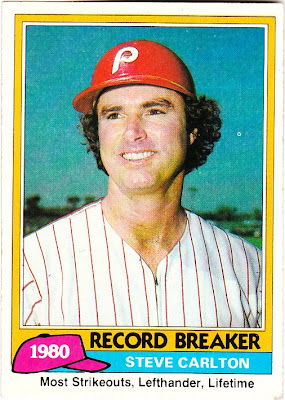 Here is a rather amusing Steve Carlton card. But I'm not going to write about his out-of-date hairstyle, or his helmet askew, or his generally goofy appearance.

Instead, I'm going to ask you to read a CNN article. It'll only take a minute. It's connected to collecting, I promise. And it's why I'm writing this post. So go. ...

The surprising thing to me about this article is not that CNN would go through the trouble of doing a story on supposedly "missing" baseball cards -- news organizations do stories all the time on situations that many think are inconsequential -- but that the angle of this story seems to be that someone swiped the retirement fund from some poor collector.

By the tone of this article, the parties involved -- the writer, the police lieutenant -- believe these cards from the 1980s could be valuable. In fact, the article wouldn't even be written if someone found, say, a children's tea set or an '80s stereo system in a secluded grassy area. But because there is a perception that remains to this day that "all baseball cards are valuable" the find is treated as a "story."

The line in the story that amuses me the most is: "Breul won't hazard a guess on their value, but he indicated some might be worth about $1."

He's absolutely correct. Some might be worth about $1. You might get 40 cents for the Carlton card. But most are definitely worth a dime. Less if they were sitting for a long time in a grassy area.

The lieutenant guesses that the cards were stolen. I suppose that's possible. It's also just as likely that a collector stashed these cards somewhere because he found out that they were worthless. Who puts a Rich Wortham card in a top-loader? Not being able to bear the thought of throwing them away, he dumped them outside, kind of like putting a baby on the doorstep.

(By the way, I'm happy to say I have all the cards that are showing, except for that '81 Donruss Larry Parrish).

I hope the police there in Washington don't spend too much time searching for the owner. Unless there is a Rickey Henderson or Cal Ripken rookie in there, I don't think anyone is coming for those cards.

But I could be wrong. If there is a collector out there really missing those cards, I've got a box of dupes from the early '80s desperately looking for a home.

Maybe I'll stash them in a grassy area and CNN can help me find an "owner."

steelehere said…
I saw this article yesterday as well. For a second, I had to check the calendar to see that it wasn't April 1st.
October 7, 2010 at 1:33 PM

Collective Troll said…
I was rolling at "some might be worth a dollar"... I feel bad for the person who wasted all the time and money putting those cards in top loaders.
When I was younger my house was robbed and all of the cards in my room were taken. The police recovered one card - a 1985 Topps Kirby Puckett that looked like it sat around in a cruiser for a month before they returned it. I remember when the detective interviewed my Mom and I after the break-in and I gave him the approximate value of everything (based on Beckett, I was like 10). He said "Wow, I know had no idea cards were worth so much. Maybe I should invest". He never returned our calls about anything that was stolen. The year was 1987, I hope the jerk invested... Great story Owl! Never did like that Carlton card, though...
October 7, 2010 at 1:36 PM

Bo said…
I didn't read the article you posted but I saw another one and the sense I got is that the police had more valuable cards that weren't in the picture but the claimant would have to specify which ones they were to prove that they were the real owner.
October 8, 2010 at 10:15 AM