February 20, 2016
I've increasingly made the weekend a rest period from blogging. I started the practice during the NFL season. People don't read blogs much on the weekend, and on Sundays during football, it's almost pointless to put something up, unless you blog purely for your own entertainment (which actually I do).

So, I figured I'd give all of us a break one day on the weekend. You're stuck fighting crowds in Walmart, or the hardware store, or the park, or whatever nightmare scenarios you people with Monday-through-Friday jobs endure. You don't have the time.

Today was going to be one of those days that I wouldn't blog. To pass the time before going to work, I cataloged some cards instead, because the hobby is a constant. That's when I came across this card: 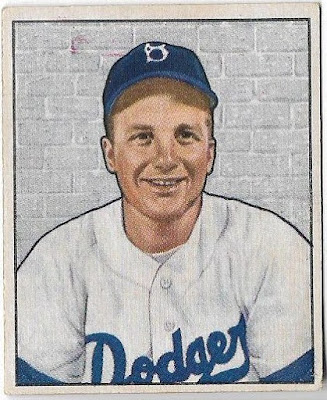 It's a 1950 Bowman card of Dodgers infielder Bobby Morgan. I received it from Scott Crawford On Cards. He had planned to send it to me quite some time ago. But during that time, I got another '50 Bowman Morgan card from Daniel of It's Like Having My Own Card Shop.

I blogged about that here, and here is that Bobby Morgan card: 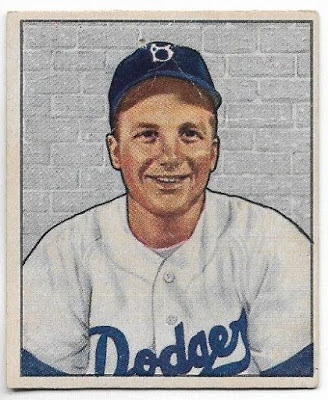 I had already received Daniel's Morgan card when Scott told me he'd be sending the package. But, I figured, what the heck, I'll take a second Bobby Morgan card. Besides, the one Daniel sent was in such fine shape, I wanted a second one for comparison's sake.

As you can probably tell, they're both in pretty good shape for 66-year-old pieces of cardboard.

Here they are side-by-side: 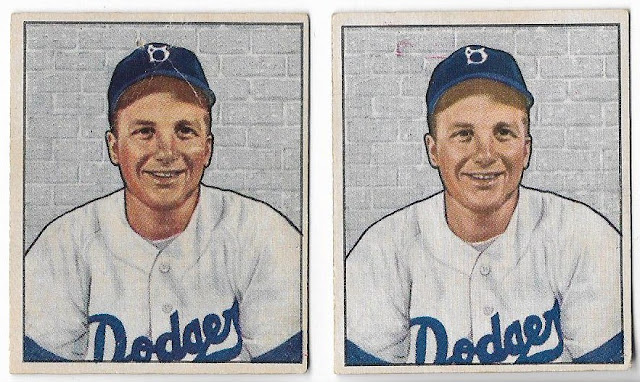 Pretty cool. Staci may have had two dads, but these are My Two Bowman Bobby Morgans.

But something happens when you think you have dupes.

A casual turn of the card, the right angle of the light coming through the window, and you discover like the best thing ever: 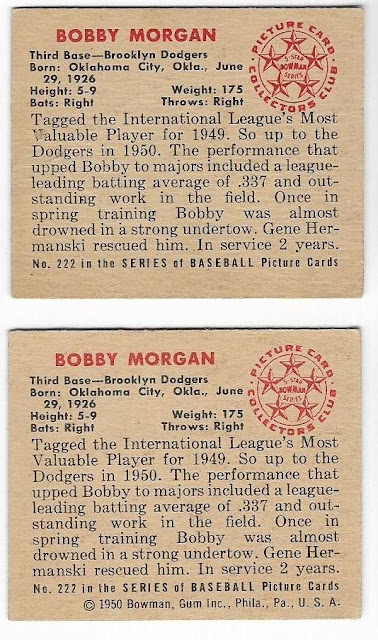 I got a glimpse of the backs and noticed immediately that one of them didn't have a copyright on the bottom.

It was so weird that I knew it couldn't have been some sort of random printing flaw. And since '50s cards are so well-examined, it had to be something well-known by now. I checked my big book of baseball cards and sure enough there are variations in 1950 Bowman. Some cards don't have copyrights. And the ones without copyrights are the rarer of the two.

The card without the copyright is the card that Daniel sent me.

So that decision to grab the second 1950 Bowman Bobby Morgan was the right one.

And my decision not to blog today was the right one, too.

Because I now know something that I didn't two hours ago. And you now have a blog post to read after waiting 2 hours for a table at that restaurant.

I'm here for you even when I don't plan to be.

Nachos Grande said…
Sundays really are a dead day on the blogs anymore! I think we need another new infusion of people interested in baseball card blogs.
February 20, 2016 at 8:08 PM

Big Tone said…
I'm always reading on the weekends.But yeah It seems like not too many others come around on Saturdays and Sundays.
February 20, 2016 at 8:16 PM

steelehere said…
I read your blog on the weekends as well and check for new posts each Saturday and Sunday.
February 20, 2016 at 10:01 PM

AdamE said…
So do they go into the Dodgers binder with the back facing out since they have a parallel on the back? That's one of the many reasons I never chased any back parallels.

(I'll admit I have two blank back Virdon cards in the collection*. Neither are in my binder because I don't know what to do with them)

*This doesn't include the 6 Topps Vault Printers Profs that also are not in my binder because once again I don't know what to do with them.
February 20, 2016 at 10:08 PM

night owl said…
I'll put each card side-by-side facing up. Early '50s Bowman goes in special pages because of their size, and since I have so few of them, I don't double bag pages, so the back is visible by just turning the page.
February 21, 2016 at 2:13 AM

Fuji said…
Great eyes. Guess I should check the backs of my handful of Bowmans. As for blogging on the weekends... one of the first things I realized was the lack of views and comments. On the flipside... I'm so busy during the week... that the weekends are when I usually read everyone's posts.
February 21, 2016 at 10:00 AM

Johnnys Trading Spot said…
I think that the viewing and commenting is even down a bit during the week too. VERY nice catch and very nice cards.
February 21, 2016 at 7:09 PM

capewood said…
When I first saw this card you posted I thought it was from that 1986 reprint set but when I looked at the set it was clearly not. I was still thinking it was some reprint set not realizing you'd concluded it was a 1950 variation.
February 21, 2016 at 10:25 PM

flywheels said…
Love the My Two Dads reference! I'm still amazed you and others can keep up with blogging nearly everyday. Granted I now run multiple active blogs versus when I started my card blog, I still get enjoyment out of reading other people's posts.
February 23, 2016 at 7:42 PM