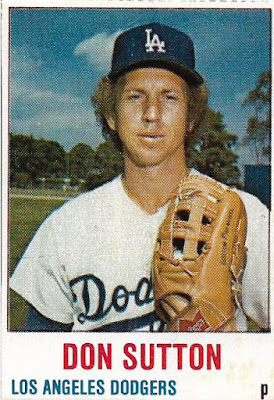 The sports card industry summit kicked off today in Hawaii. That's not the first place I think of when I think baseball cards. Unless it's these. But actually it's appropriate that they're all in Hawaii.

At the summit today, there's been a lot of talk about relevance, appealing to a larger consumer base, reinstating National Baseball Card Day, you know, basically focusing on the modern card world.

And that's why it's appropriate. Because I'm moving as far from that world as Hawaii is from me.

As I mentioned recently, each year for the last decade my purchases have revolved around the baseball card calendar. January through April, I focus on current cards, because that's when flagship and Heritage is released. May through June, I step back and get ready for Series 2 and Allen and Ginter. July through September, I focus on non-current cards, mostly vintage. October through December, I mostly take a breather and check out Update and/or Chrome.

I don't plan it that way, that's just the pattern that has emerged as my card world circles around the sun that is the modern card collecting calendar. Even in years where I collected less current card product: 2012, 2014, I've still revolved around that calendar.

I've known that the look of 2016 Topps was going to suck for quite awhile, so that gave me some time to prepare. And although I did seek out 2016 Topps and bought a rack pack when it arrived, that's been it. I'll take part in the hobby celebration ritual of opening new packs, but it's not going to rule me anymore.

So, instead, this year, I've been spending cash on cards that I know that I'll like, basically stuff from the past.

In the last two months, I have ordered cards online equal to the number of times that I have done it in an entire year over the last several years. Ebay and COMC is getting a lot more of my business than the places that sell current cards. And nothing about those Ebay or COMC purchases says "2016" on it.

I recently received my third group of COMC cards since January. I can put them in two different categories: very recent past cards and super groovy tributes to the '70s. 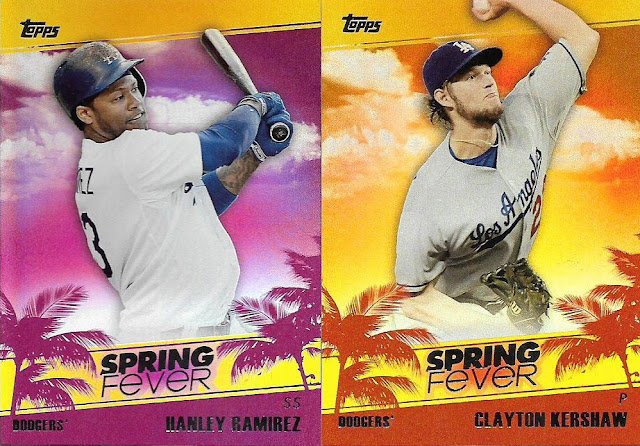 Spring Fever cards from 2014. "You just go down to your local card shop and pick them up there!"

Yeah, what about all us collectors whose local card shop is half a day's drive away? We can only hope we remember to track them down once they show up online. Fortunately, I remembered these two. I really like the design of these earlier Spring Fever cards. They haven't been as good lately. 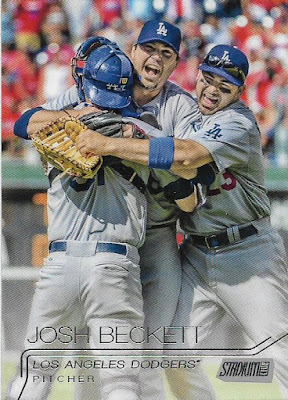 This is the last Dodger Stadium Club base card that I needed. The Josh Beckett card is one of the trickier cards in the set, --you know how Topps likes to print certain cards in the set more often than others and not tell you about it. I still need a Beckett for the Stadium Club set-building task (another reason why I'm not taking on 2016 card tasks). 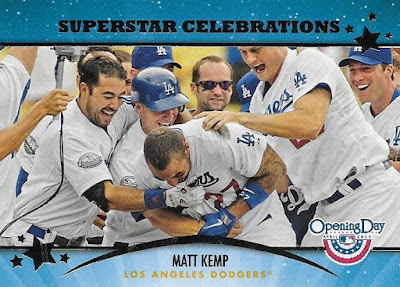 I found myself gravitating toward old Matt Kemp cards when I was filling the cart. Yup, another strike against 2016. In 2016, Kemp is living out his pre-retirement years in San Diego. 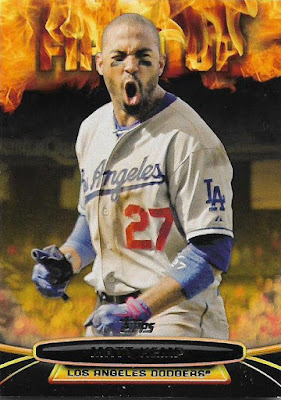 Opening Day can do the inserts. 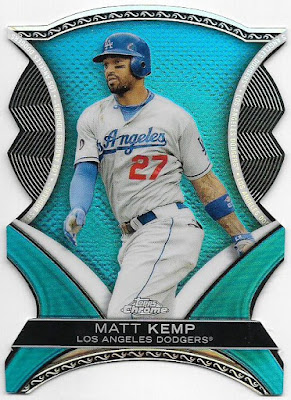 This is just to show everybody that I"m not going to start showing nothing but vintage on my blog. Honestly, there's not anything here that I really like about the card. But I've always enjoyed diecuts so here we are.

Before I get to the '70s portion of the post, I need to show one card in the package that doesn't fit either category. But it gives you a good idea of how impressive league leaders cards can be. 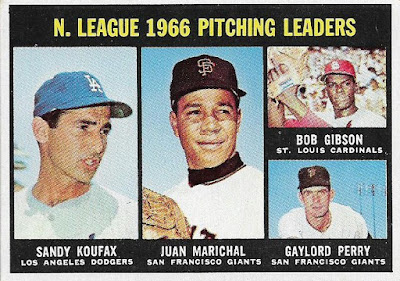 1960s league leaders card are the best. A current leader card of Jake Arrieta, Zack Greinke and Gerrit Cole will never compare. This was part of a concerted effort to track down Koufax leaders cards, because I always forget that Koufax is in the 1967 Topps set. 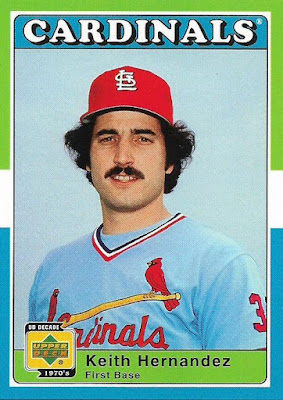 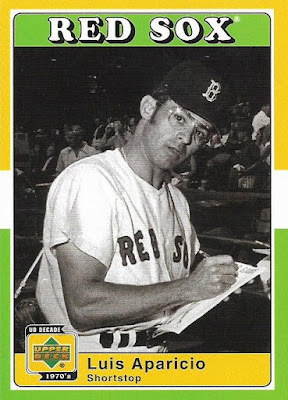 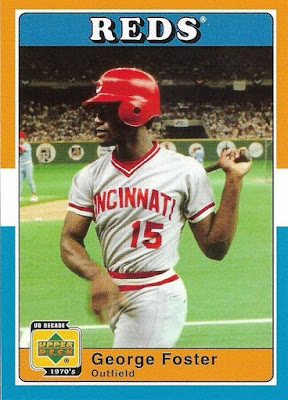 It's about time I get on the 2001 Upper Deck Decade '70s horse. A trio of fantastic here. I've decided I don't mind the black&white cards because that's what the '70s was: color mixed with black & white.

I believe the George Foster photo is from an All-Star Game. 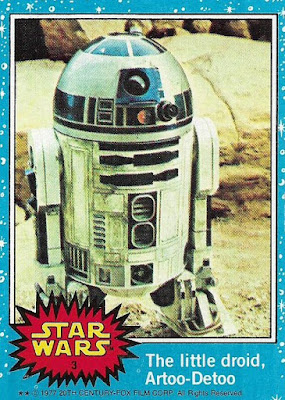 The latest entry for the '70s TV show/movies binder. I may not have kept up with the Star Wars franchise, but I remember the '70s hoopla well and fondly. R2 was the main robot in my world back then. 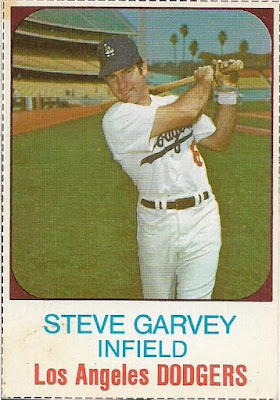 I have soooooo many collecting ambitions. Now that all the Kellogg's Dodgers are mine, it's time to round up all the Hostess Dodgers. The SPs are a little nasty, but I'll pretend those don't exist right now. I'm just happy I have the Hostess Garvey from 1975, when Garvey mania was at its highest. Just a hint of twinkie grease on the corner. 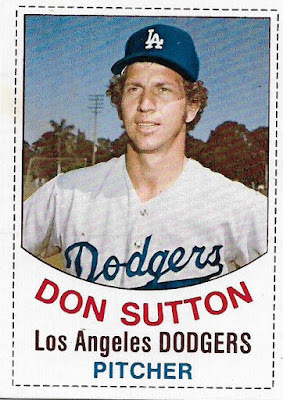 Both the 1977 and 1978 Hostess Suttons arrived in this package (both #70, by the way). I jumped at this one because the entire border is intact, and now I have a challenge: do I attempt to cut perfectly on the lines, or do I simply slide it into a page because it's the exact height and width of your average card? 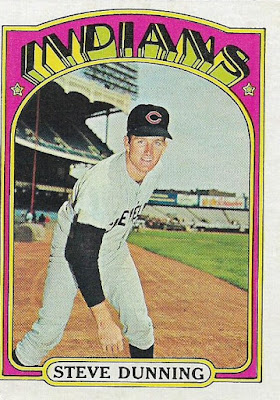 The grand finale is going to include '72 Topps until I get this beast complete. This is card #658 of Mr. Dunning, who was voted All-Avocado league third baseman. You can't beat long-winded write-ups from the '70s. 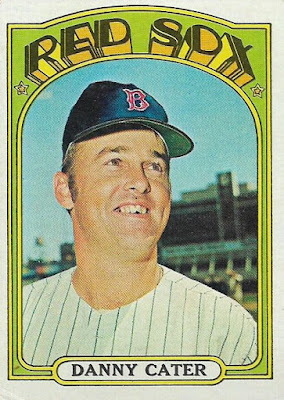 Another sky-high number (#676) of the goofy-looking Danny Cater, terribly amused that he is wearing a Red Sox cap and Yankee jersey.

This is one of those cards I've passed on card show after card show. I don't have to feel the guilt any more. 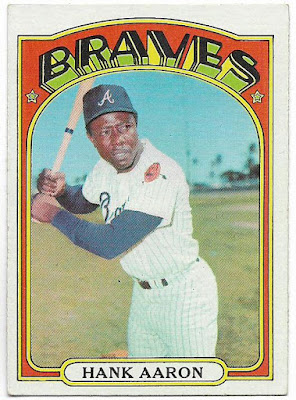 Another '72 road block removed. This is the last pre-Series 4 card that I needed. Aaron will look mighty nice next to the Aaron In Action card that I've owned for decades. I'm coming for Seaver next.

I've already got a couple of different carts of cards filled for the next purchase. And there's not a 2016 card anywhere in there.

The industry summit can talk all it wants about attracting more customers, digital apps, new web sites, whatever. I'm simply not buying. I'm sure they don't care, I'm probably not their core customer anymore, but that's OK.

Jeff Jones said…
Those Sutton Hostess cards are nice, love the one with the full border. I actually just picked up that Beckett for my set Sunday out of a nickle box and it was my favorite photo of the 8 or so I grabbed that I needed.
February 22, 2016 at 8:03 PM

Mark Hoyle said…
Have you joined the non pack ripping brethren? At least for a year anyway. I already picked up my Sox Topps series 1 set at a recent show for $2.00. I've been recently putting together the Topps 67 set.( one card to go the Seaver rookie).So I was torn if I should pursue the Heritage set to accompany it. Might just buy a hand collated one. Just spent two weeks in Hawaii didn't see one card related item anywhere. Love the Koufax 67 leader card
February 22, 2016 at 8:05 PM

Johnnys Trading Spot said…
I do think "they" are starting to realize just how much or better worded how less the everyday consumer is feeling them. Pretty desperate move thinking Dr. Beckett ha, and Kit Young were going to make the industry leaders all giddy.
Oh well, I'm with you, not busting any 2016 packs or boxes unless they're free. LOL.
February 22, 2016 at 8:11 PM

Nick said…
Upper Deck Decade is loaded with fantastic cards, but that Foster is -- and has long been -- one of my absolute favorites from that set.
February 22, 2016 at 9:49 PM

night owl said…
Oh, I'm building it. I've got a want list and everything:

RoundtheDiamond87 said…
I actually got my start in cards in Hawaii. They have probably the largest swap meet in America--surrounding Aloha Stadium. There were card dealers everywhere during the '80s-'90s.
February 23, 2016 at 9:23 AM