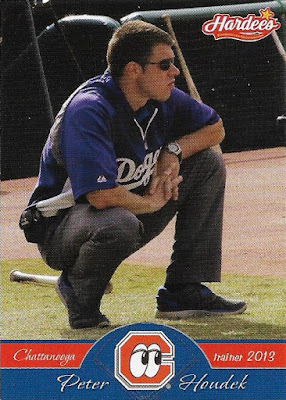 But I feel myself doing none of that in 2016. Sets that I have collected enthusiastically in the recent past -- Allen & Ginter and Stadium Club -- will get no more than token treatment. Heritage, the only set with promise, sabotages itself with shortprints every year. (I will still buy periodic packs because pack opening is the essence of the hobby).

As I take greater control of what I want to collect, I've already sensed that I am placing greater attention on vintage and the quirky corners of this hobby. And that's coming out in what I buy and apparently in what I write about -- because others seem to be noticing it, too.

In the last week or two I've been hit with card packages with the overriding theme of quirky, or in plain, hobby terminology: Oddballs!

I'm going to show three of those packages here, focusing on the oddities inside. 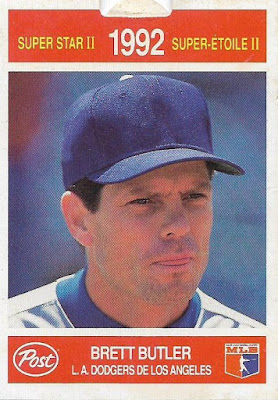 This card arrived in a PWE from Mike.

It is from the 1992 Post Canada set. It is everything that an oddball should be. It features a food logo. It features a logo-less cap. It has a tab so you can make the card stand up if you so choose. 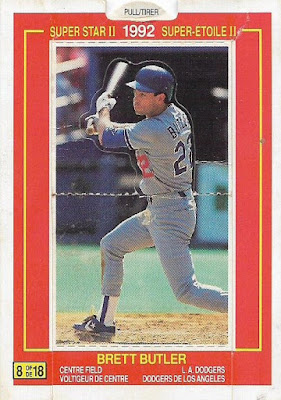 That is the figure that would stand up. But I am taking a stand and refusing to pull. Or "tirer."

These are the least oddball of the oddballs I received. These came from Tony of
Off-Hiatus Baseball. They are from the 1990 Pacific Legends set, which were probably considered much more oddball then than they are now. These are the last cards I needed for the set, although I know I have mentioned Newcombe's misspelled card on this blog before. 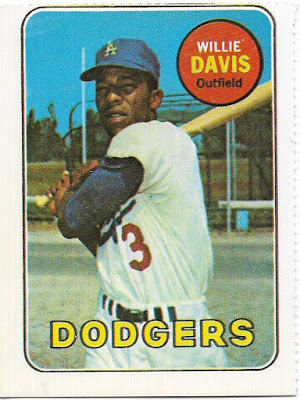 Tony also sent a bunch of Dover Publications reprints. This particular reprint of Willie Davis' '69 Topps card I have received before from Tony. I vividly remember begging him for the card. 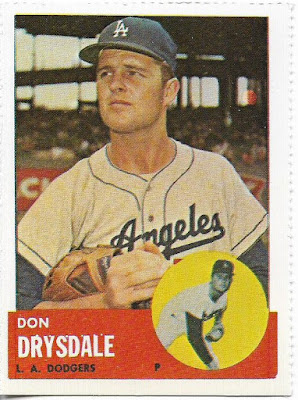 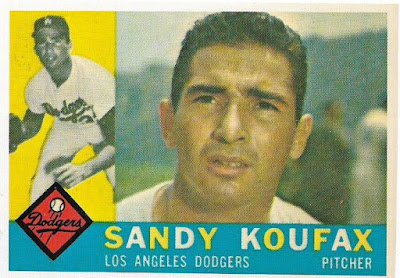 Two more reprints of significant '60s Dodger cards. I'm happy to say I have both of these Topps originals.

The giveaway for Dover reprints -- outside of the perforated borders, glossy fronts and thinner stock -- are the backs:

They're all white. And one thing we definitely know about 1960s backs is they were not white. 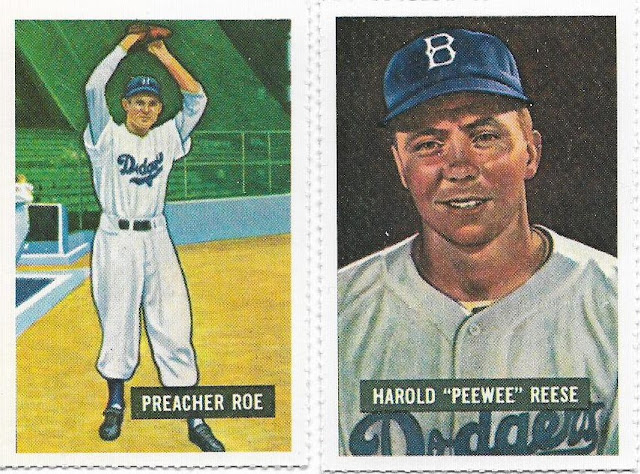 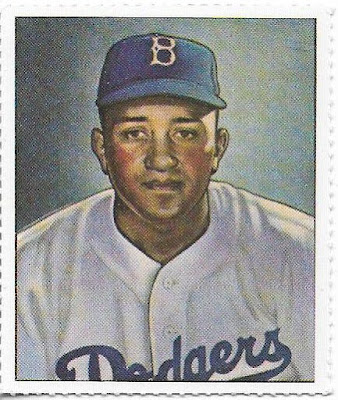 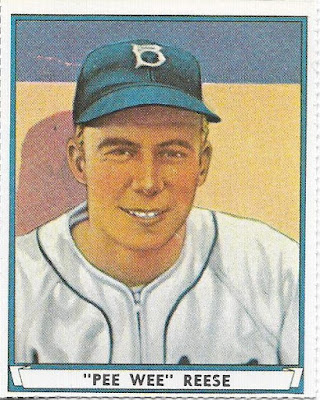 Going back in time with the reprints to cards I hope to own one day -- 1950 and 1951 Bowman and 1941 Play Ball. Reprints are definitely collectible, especially for the many collectors without deep pockets. 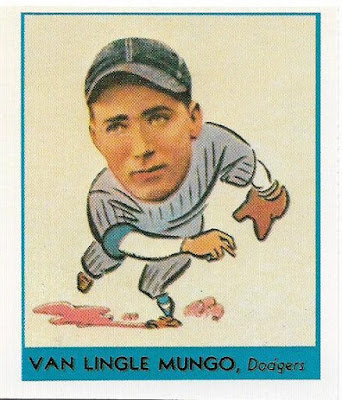 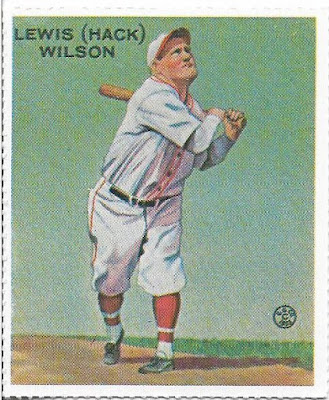 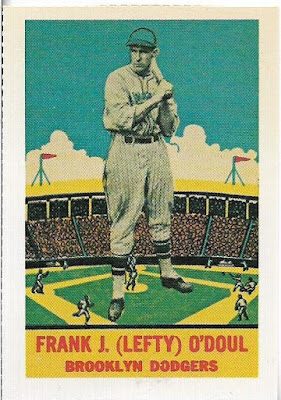 Stepping farther back into time with some 1930s-style reprints for Goudey and DeLong. 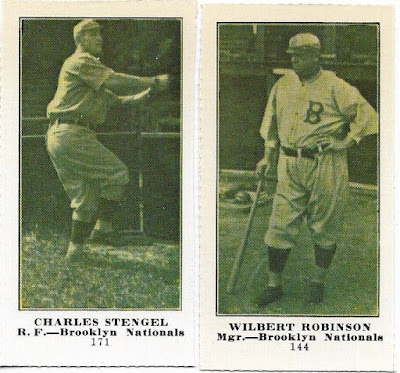 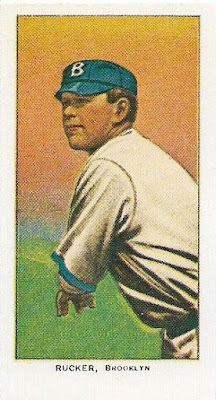 Finally some reprints from the time the Dodgers were called the Robins. Those are Dovers of 1916 Famous and Barr Company and a 1909-11 T206.

All of this is making me want to devote a binder toward my reprint cards. I think I'll definitely do that. 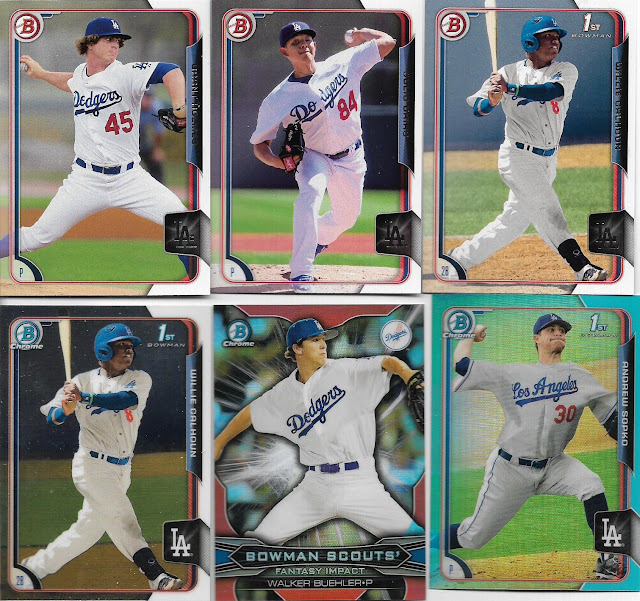 
Let's move on to Brian of Highly Subjective and Completely Arbitrary. He's got some oddballs, too! 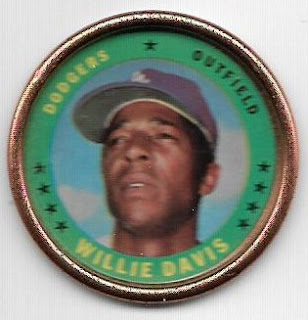 How odd! It's not rectangular, doesn't feature right angles and isn't made of cardboard. It's a 1971 Topps coin of Willie Davis. 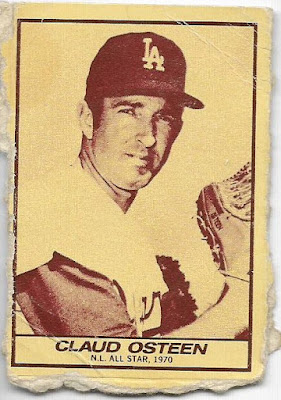 More oddball greatness from 1971. I've long been intrigued by the '71 Milk Duds set, but never bothered putting the Dodgers on my want list for reasons I still can't figure out (probably insanity).

The 69-card set features stars of the day, all off the side of tiny Milk Dud box. As you can see, Claude Osteen's first name is misspelled. There were a few misspellings. You try getting a sepia-toned card on the side of a tiny candy box and spell things correctly. 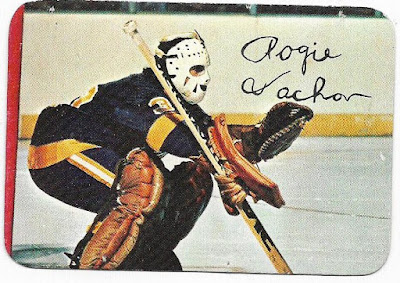 Brian is testing my hockey knowledge with this beauty. It's one of the insert cards that came one-per-pack in 1977-78 O-Pee-Chee/Topps hockey. There were 22 of these glossy inserts. That's some forward-thinking for that time period, by the way.

Rogie Vachon here is the only horizontal card in the set, by the way. 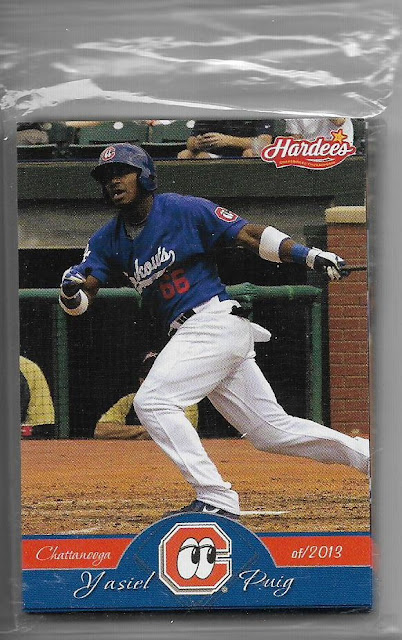 Finally, this is a team-issued set featuring the 2013 Chattanooga Lookouts, the Double A team of the Dodgers. As you can tell, the club was noted for featuring a young phenom named Yasiel Puig. Chattanooga was so proud of this that it placed Puig front-and-center in its card package, something that is a tried-and-true practice with young minor league phenoms (I experienced the same thing in Syracuse with Strasburg and Harper).

I'm not storing this away for my kid's college education, so I opened it right up. It was the usual assortment of guys I've never heard of, plus guys only I have heard of, plus the best stuff: coaches and trainers.

Here are a few people who now own major league cards: 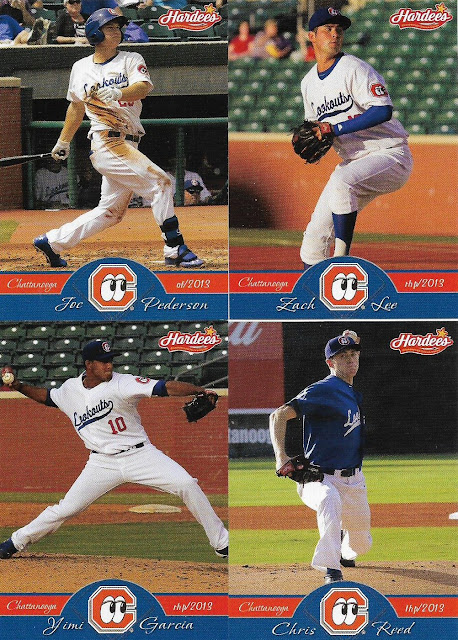 Also, please note the Hardees logo, that was placed there just to keep me in oddball heaven. 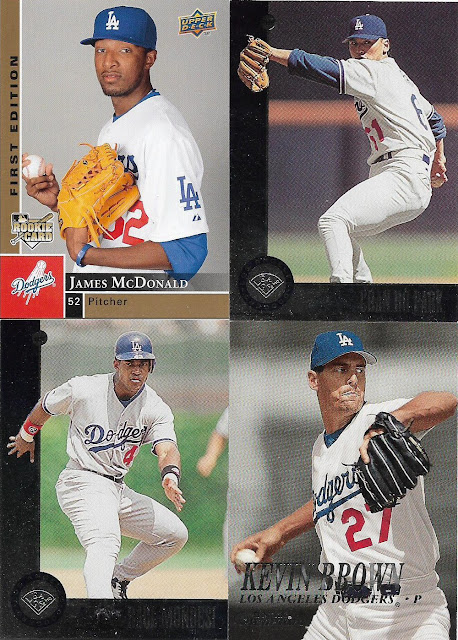 But forget that you saw these. They aren't what this post is about.

This post is about the oddballs, the cards I love more and more each day.

I guess I feel a kinship with them, in this world of increasingly slick and digitized cards. Oddballs, I think fit my personality more.

You know what they say: it takes one to know one.

Johnnys Trading Spot said…
Hey NO, had a hiccup at the P.O. today, so I am going to have to repackage your cards. I will get to it this weekend and then mail them off Monday or Tuesday. There might be an 'ODDBALL' or two in there.
February 17, 2016 at 9:18 PM

Adam said…
Some tremendous oddballs right there. I like the Hardee's cards ... great, now I want a hamburger and fries from there.
February 17, 2016 at 9:21 PM

Brett Alan said…
I know what you mean...oddballs are lots of fun. I'm jonesing to buy a box of cereal or snack cakes with free cards! Maybe I'm missing something, but it seems like a long time since there's been a significant national food set.

AthleticGigantes said…
Those are some Super - Etoile oddball cards. Now I need some Canadian Post cereal!
February 18, 2016 at 12:18 AM

Tony L. said…
I'm glad you liked those reprints, N.O. I really like them for the fact that I have never held or even seen in person a card from the 1916 Famous and Barr Company set, for instance, but at least I can see what they sort of looked like.

By the way, you should be thanking your lucky Walker Buehlers for those Bowman draft cards, since that was the foundation for all the lovely oddballs from me!
February 18, 2016 at 7:22 AM

BobWalkthePlank said…
Tony just hit me up with an oddball extravaganza too. I had to ask him about the origins of the perforated reprints.
February 18, 2016 at 8:04 AM

Brian said…
I have been holding onto the Lookouts team set for a while. I was in Chattanooga last summer to see them (they are a Twins affiliate now) but they didn't have a set of Twins minor leaguers yet. So I got the older set instead and just waited for the right time to strike!
February 18, 2016 at 10:39 AM

Anonymous said…
I wonder how Mr. Houdek feels about the fact he's on a baseball card and can look his name up in Beckett to verify. That kind of thing would seem pretty cool to me.
February 18, 2016 at 1:19 PM