Nothing to spit at 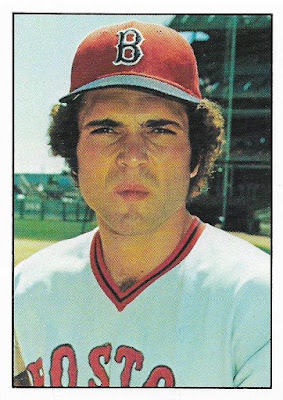 I wasn't going to do this post because I've basically done it already (the perils of being in your eighth year of blogging). But on that very post, I rediscovered a comment requesting more cards of players chewing their cud.

So, three-plus years later, departed blogger, your wish has been granted.

Going through my brand new complete 1976 SSPC set, I discovered card after card of a player enjoying a fat wad of tobacco. This pleased me quite a bit because it confirmed what I knew about ballplayers when I was growing up. Part of what made the game of baseball baseball back then is that players (and managers and coaches) chewed tobacco. I admit I didn't know much about tobacco, other than that my mother hated it and players seemed to really, really like it. And that spitting was COOL!

In the '70s, tobacco-chewing was the background of baseball, like vendors calling out their wares, or jets flying over Shea Stadium. It was part of the experience. And, then -- understandably, sensibly, terrific for the welfare of everyone involved including the clubhouse man -- it all but disappeared. And now baseball has better teeth.

But I still seek out signs of tobacco on cards, because that's my childhood there. When I was going through the 1975 Topps set for that blog, I made sure to count the number of players who I could spot chewing tobacco. I came up with a measly four cards -- Joe Coleman, Ed Herrmann, Jackie Brown and Don Carrithers.

That was depressing. There had to be more than four players chewing tobacco in 1974. Geez, I saw that many in a half inning of NBC's Game Of The Week!

Fortunately, the SSPC set confirmed what I always knew. Baseball was covered with tobacco stains in the 1970s.

Thanks to the sheer number of tobacco chewers in the set, I can place them in one of three categories. 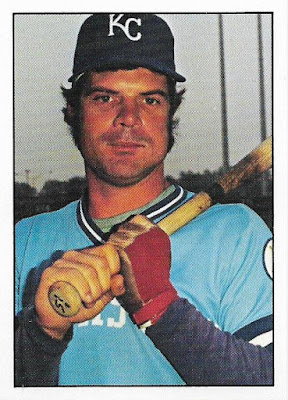 The most obvious is the Bulging Cheek. It tells the tale the best and is the most visually gratifying. Bob Stinson here is demonstrating left cheek harboring. 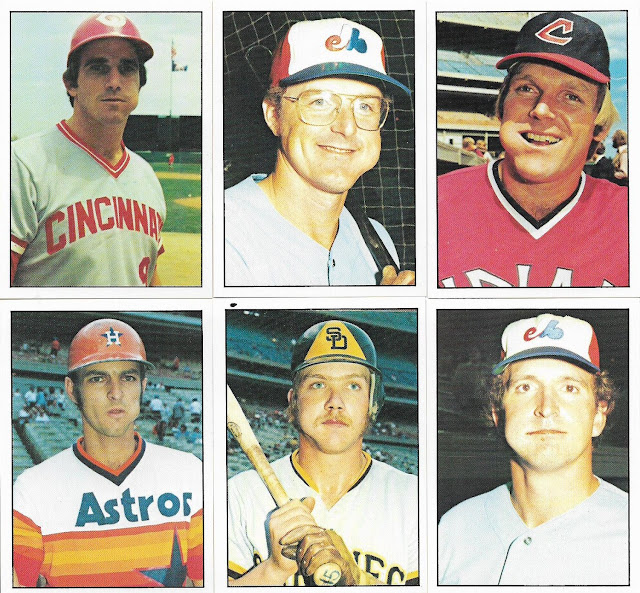 Each of these players -- Bill Plummer, Jim Lyttle, Tommy Smith, Roger Metzger, Mike Ivie, and Dan Warthen -- aren't shy about their tobacco use. It's possible these photos would have found the cutting room floor at Topps -- they were marketing to kids, after all -- but thank goodness they were preserved somewhere. I don't want anyone to accuse me of making things up. 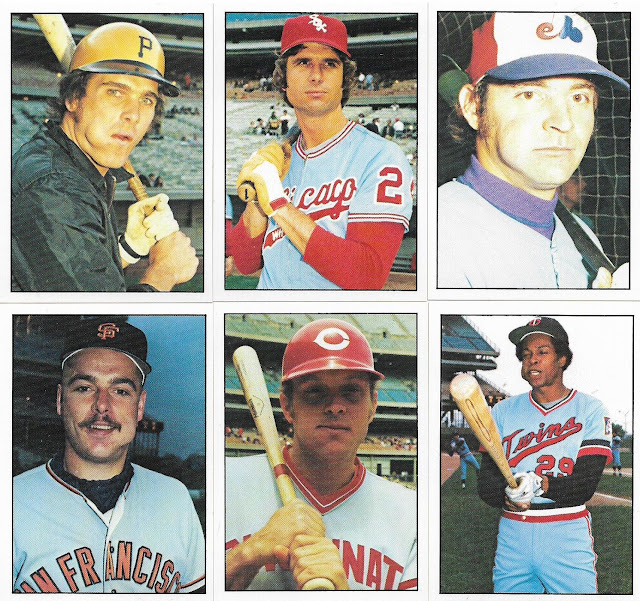 Plenty more where those others came from. I wonder how many of those chaws are Red Man brand?

Then again, the 1970s marked the new era of "smokeless tobacco." Helped by pervasive television commercials during ballgames, I wondered what it would be like to enjoy just a pinch between my cheek and gum. I looked forward to the glossy advertisements in Sports Illustrated that featured tins of Copenhagen, Skoal and Happy Days.

That brings me to the second category of tobacco chewers: 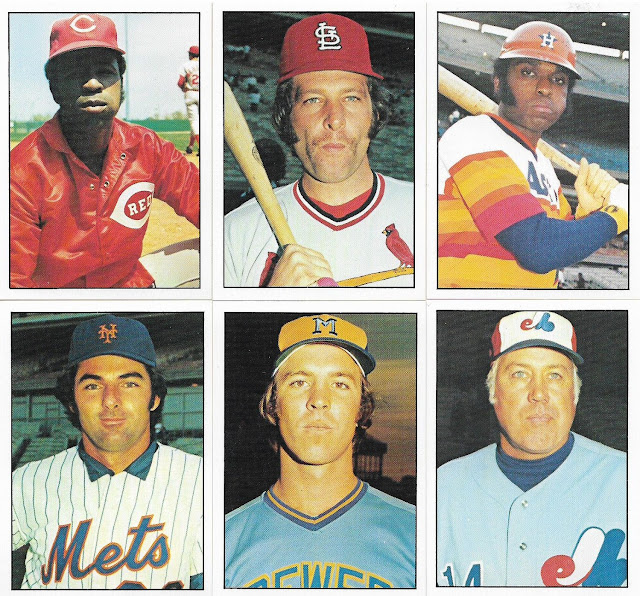 It's the So Good I Could Spit chewers. Look, even Duke Snider in an Expos uniform has gotten into the smokless tobacco scene!

The classic card in this group is the Bernie Carbo card way up at the top of the post. He can barely contain himself. But as a kid at the time, I probably thought that Carbo and these other guys just didn't feel like smiling. Or had a sour disposition. Their tobacco use would have been a secret to me.

The final group is the Talk-and-Chewers. This is a more difficult task, judging by the relative scarcity of these kinds of cards in the set. Congrats to Dave Tomlin, Mike Tyson and Joe Coleman for pulling off the multi-tasking feat. 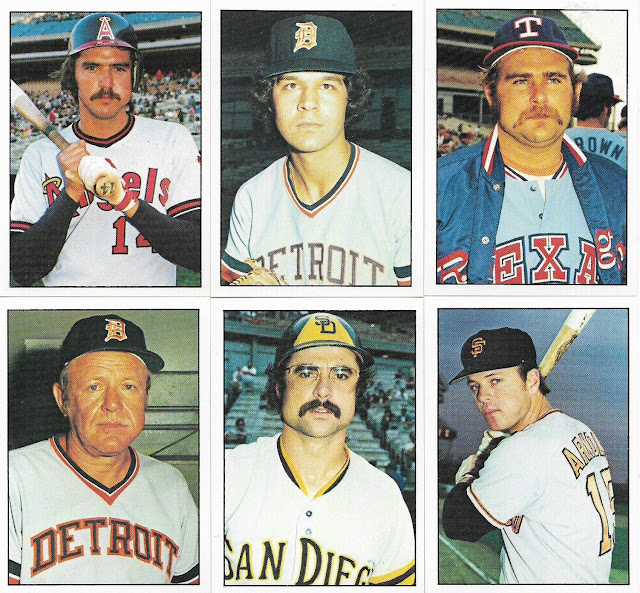 Wherever I saw baseball as a kid, whether on TV or in the stands or in the pages of a newspaper or magazine, there were chewers and spitters. Some will accuse me of romanticizing an addiction, and I am aware of all of the terrible stories of players and nonplayers who struggled to quit or who never quit.

I'm not advocating a return to these days. I'm just saying that this was a part of the scene back then. It was a very human part of the baseball scene, and I love baseball at its most human.

You can sanitize the sport all you want with rules and replay and photoshopping, but I want baseball as real as it gets.

The SSPC set is definitely that.

Unknown said…
Great post. Your right, it was a horrible habit, but it was just the norm of the time, like the romanticized cigarette of the '40s and '50s of Hollywood stars. It was just the culture of the time. Once we learned of its ill effects, it started to be frowned upon and you saw less of it on baseball cards. I bet that many of us kids who were around in the 70's and early '80s mimicked a chaw chewing spitting ballplayer as we competed in the backyard World Series of our youth.
February 18, 2016 at 8:15 PM

Johnnys Trading Spot said…
Don't forget about Levi Garrett. Was popular in the 70's and 80's. I did a "mini" collection called DIP SHOTS/DIP SHITS a couple of years ago, wound up giving it away in a contest.
February 18, 2016 at 10:05 PM

steelehere said…
I'd go a step farther and say that Topps should have had the Red Sox from a few years ago eating fried chicken and drinking beer especially Jon Lester. It would be the equivalent of the 1948 Leaf Honus Wagner card.
February 18, 2016 at 10:07 PM

Jeff Jones said…
I was lucky enough as a 90s kid to gave my favorite player always have a cheek full of chaw - Chipper. These cards are so perfect, I just discovered this set a couple weeks ago at the Flea Market.
February 20, 2016 at 8:38 PM