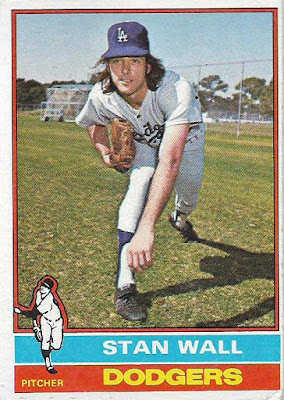 I don't consider myself a "supertrader."

When putting card trades together, I'm slow. God, I'm slow. I might get something out in the mail once every two weeks if things fall just right. And often, they don't.

My inventory isn't deep. The hobby is about fourth or fifth in line when it comes to cash handouts. So there's not a lot to go around.

But good intentions? I own a bunch of that. When it comes to planning and intent, I'm as super a trader as you're going to find.

Perhaps that's why I'm part of Jaybarker Fan's Junk's Supertraders crew. It's a pretty exciting venture that Wes has put together, and I'm grateful for being a part of it. I'll try to keep up the best as I can, but I think you all know that I'm not really much of a box buster (that doesn't mean I won't surprise you though).

As for trading, don't be concerned, supertraders or otherwise. I'll spread my paltry stockpile among as many people as I can as usual, whether they're in the group or not. In fact -- Wes, cover your ears -- I just sent out cards to three Braves fans. And now I'm panicking because there might not be a Braves card in the house. I guess I might have to bust a box!

Wes recently kicked things off by opening a fancy box of Topps Museum from a couple of years ago. There were a couple of snazzy cards to come out of that. I didn't get anything stunning other than this super base card: 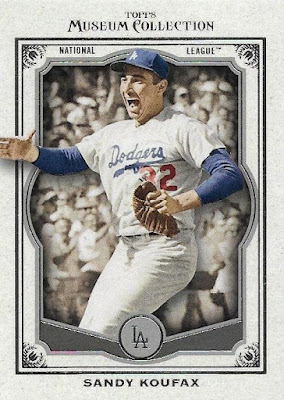 Even though it wasn't on my sizable want list, this is a card I needed. It's a photo that's been recycled quite a bit by Topps the last three years, which is a good way to throw me off on whether I own the card or not. I also wish the card didn't cut off Koufax's fingertips on the left side. But I wouldn't want to critique our benevolent card maker and agitate the Twitter posse. 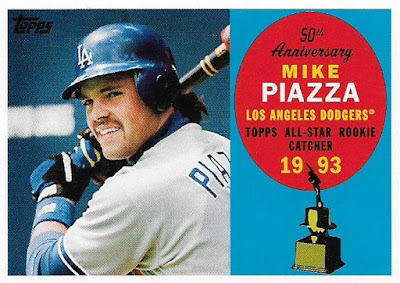 Of course, Wes sent out a bunch of other tailored cards along with the box-breaking stuff. I uploaded one of those cards, the 1976 Topps Stan Wall, at the top of the post because it's the last card I needed to complete the Dodgers team set from that year, way back when I was first trying to complete earlier sets during the early 1980s.

Sure, some of the cards I received in this package I had already -- I am a supertrader after all -- but the Mike Piazza card from 2008 Topps was not one of them. How this semi-run-of-the-mill insert from '08 (it actually was a decent insert idea) escaped me, I'll blame on those baseball card gremlins. 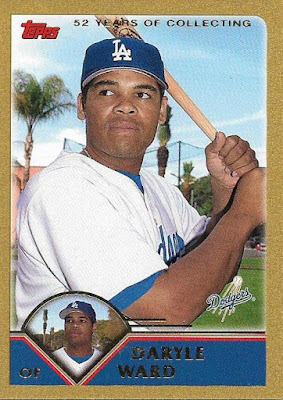 More stuff that's much more elusive than it should be. This is the first gold Dodger parallel that I own from the 2003 flagship set. Only about 22 more to go. It figures it would be of Daryle Ward, one of the most useless Dodger pickups of the first decade of this century. 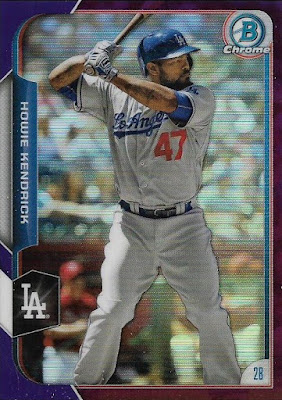 As if you didn't know, Wes is the King of the Supertraders. He must have trucks backing up to his garage on a nightly basis. I had no idea that Bowman Chrome produced numbered purple parallels last year. Wes was able to confirm it. 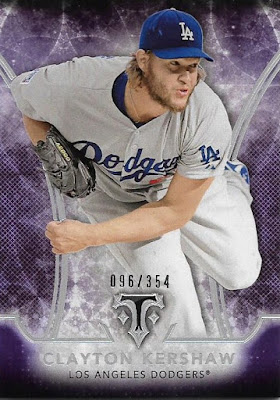 More fancy purple. This Triple Threads card of Clayton Kershaw is tarnished only slightly by the mention of him being a fan of Justin Timberlake on the back. He's OK, I guess (Timberlake, I mean). Just not my kind of show. 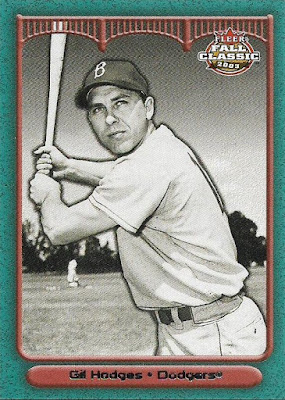 I will go on a slash-and-burn mission one day with the goal of obtaining every early 2000s Fleer retro Dodger card. This Gil Hodges Fall Classic card will be my motivation. 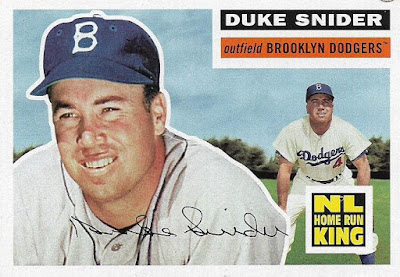 This card's a stumper. It's from 2006. It's from Topps (obviously). It's made of good, solid cardboard. It's in the size of an actual 1956 Topps card. It's numbered #342. But I can't find it in my Standard Catalog of Baseball Cards. Someone's going to take away my supertrader badge for not knowing stuff like this.

Wes also sent another Duke Snider card that scanned so poorly that I had to take a photo. 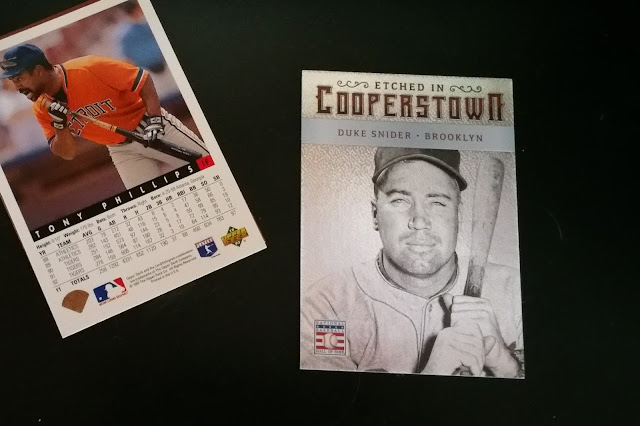 There it is. Pretty impressive for Panini.

I've got a few packages to send out early next week, and then I'll get started on some super-trading.

Jeremya1um said…
I thought Ward would do a lot better in his career. He was capable of hitting 20 HRs in a season if he got 400 At Bats but rarely did. I saw him play in the Minors in 1996 and have collected him ever since. That Snider card is cool. Never heard of where it's from either.
February 20, 2016 at 10:43 AM