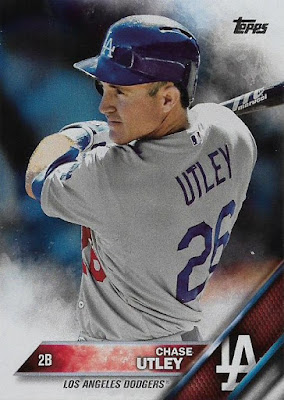 I'm feeling nothing in terms of a post, so why not discuss something for which I feel nothing:

Nobody who read this blog yesterday knew it, but I actually received two cards from Texas Dave. The second card that he sent along with the Jhonny Peralta Perspectives night card was this Chase Utley foil parallel ... oh, excuse me, rainbow foil parallel.

I decided not to show it yesterday because I had nothing to say about it. That's what I feel when I pull one of these parallels (which by the way are not numbered, which I can't decide whether that's a good or bad thing). Nothing. It's taking up space. It's one of those card blockers except with a photograph and some words and letters, you know, like a base card.

These cards are so inconsequential, so boring -- existing in that depressing purgatory between a useful base card and a super shiny chrome card -- that I've decided I'm just not going to acknowledge these cards anymore.

That's right. It will take something terribly interesting and notable for me to ever display one of these ... um, rainbow ... foil cards ever again. 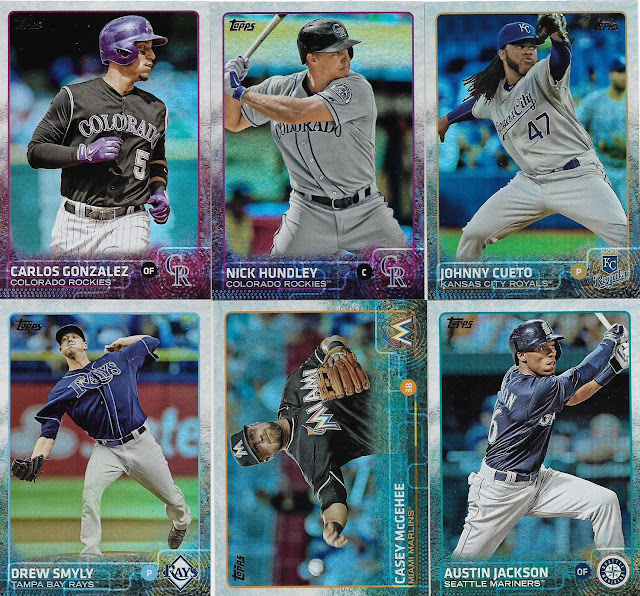 Anybody want these? Is there anyone collecting a complete rainbow foil set?

This is all that's left from last year's revival of foil cards. And that's only because the one Rockies trader I know has gone MIA, and we all know there are no Rays or Marlins collectors.

I placed the above foil cards in my 2015 Topps binder, and then I decided to take them out. They don't deserve to be with the other ones.

I'm still holding onto the Dodger foils, because I have a disease, but I'm not too happy about it.

These are the Dodger foils that I own from 2015, most sent to me by generous folks because I can't even pull lame parallels of my favorite team: 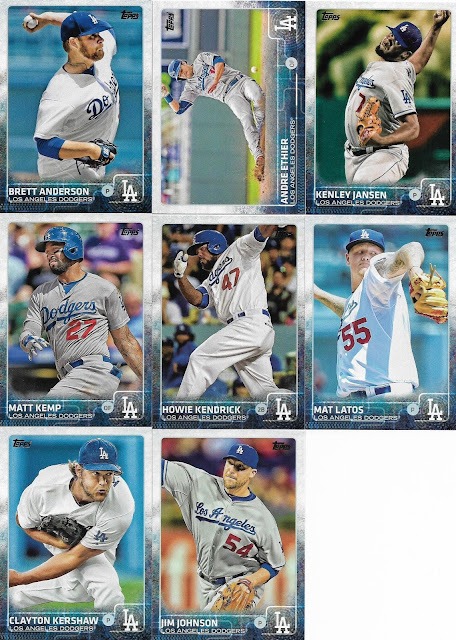 Can you tell any difference between them and the base cards?

HA! Because they ARE the base cards! Foiled again! 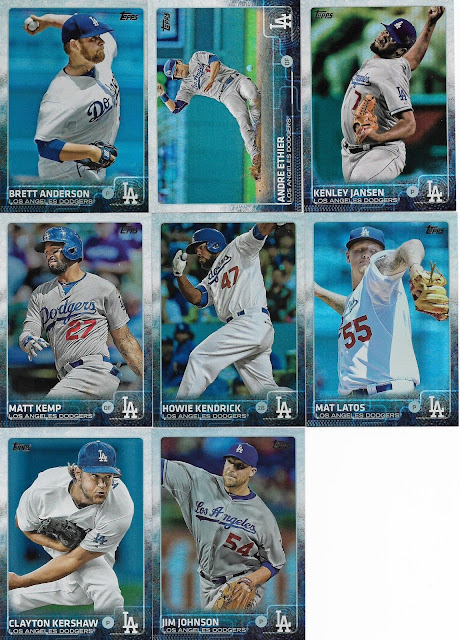 These are the foil Dodgers. They have a bit of a tint to them, and the difference between the foil cards and the base cards in real life is only slightly more apparent.

That's the big reason they bore me. They aren't like colored parallels or gold parallels or anything that I like. They're useless. Somebody in my last rant about foilness suggested it might have to do with my night-time schedule. Not enough sunlight to reflect the foil. My environment could have something to do with it, but more probably related to the gloomy Northeast weather. Everyone around here has a Vitamin D deficiency because the sun doesn't shine between November and May.

I tried to find some place well-lit where I could see these cards supposedly shine. It wasn't easy. It's very snowy today. So I plastered some foil cards up against a window sill in a room upstairs that gets a lot of light. 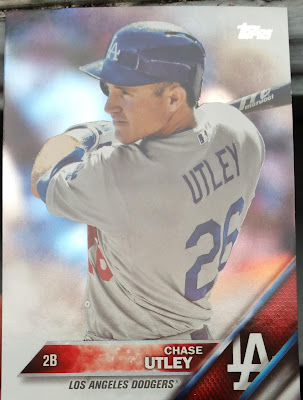 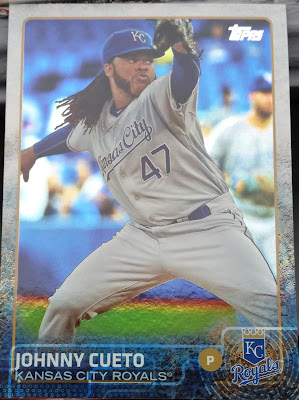 I gave up after only a few tries. Sure, they reflect the light a little bit, maybe half as much as your typical refractor. But I'm still looking for that rainbow. 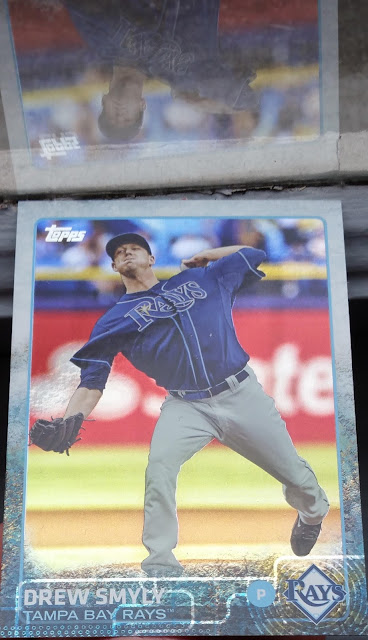 The coolest thing was the card's reflection in the window.

Maybe if I lived somewhere where it's 85 degrees and sunny all the time and everyone plays with their cards outside, this would be a terrific parallel. But, still, probably not.

Somewhere on this blog, around 2009 or 2010, you probably can find me stating that the time for foil cards has passed. Foil parallels showed up in the '90s and then kept showing up through the end days of Upper Deck. I grew tired of them very quickly. And it was time to give it up.

Then, five or six years later, Topps decides to put foil parallels in their 2015 set. Because that's new and refreshing, right?

You won't see me mention a foil parallel card again. I'm done with them. They never existed.

Johnnys Trading Spot said…
There was an article in the February (could've been January) Beckett that highlighted a survey of collector's and overwhelmingly, the HOBBY does not want the parallels not just the "foil" (box store colors too) keep it to a bare min. I say No more than 2 VERY distinctive and LIMITED (#d). Rant on.
February 12, 2016 at 11:35 PM

Jeremya1um said…
The foils bore me. I like the gold cards as well as the camo and sparkle cards. Also don't really care for the Walmart/Target/Toys r Us cards either.
I collect Rays cards and I know of at least one other blogger (I can't remember his name, but he had a pc that included Alex Cobb and Longo) that does. Can't think of anyone that collects Marlins cards but there has to be somebody (especially near Miami) that blogs and has a Marlins collection. You would think there were more cars bloggers out there, but it seems that there are maybe only 50-100, based on the fact that certain teams don't get much love.
February 13, 2016 at 4:50 AM

Fuji said…
I personally don't mind the foils as much as the cheap, overproduced inserts (that look exactly the same year after year) they flood the hobby with.
February 13, 2016 at 10:50 AM

Trevor P said…
I agree with you here. I sometimes get annoyed by the overwhelming number of parallels out there, but these rainbow foils are better than most of Topps' cheap inserts (last year's Free Agent 40, for just one example).
February 13, 2016 at 11:05 AM

night owl said…
I find inserts that have a concept behind them far better than the same card with some mediocre shine on it. Free Agent 40, while not well-executed, had a good concept. Most of the inserts this year (aside from Berger's Best and Back-to-Back) are not bad.
February 13, 2016 at 12:30 PM

Fuji said…
Haven't opened any 2016 yet... but I wasn't a fan of more than half of the inserts produced last year. Gallery of Greats was a beautiful set. But the Free Agent 40, Rarities, Archetypes, Eclipsing History, Highlight of the Year, Stepping Up, Whatever Works, Rookie Sensations, Tape Measure Blasts, Baseball Royalty, and Baseball History inserts probably could have been subsets IMHO. Actually... most of my grumbling has to do with the fact that they flooded our hobby with all of these insert sets. Had they used two or three of these insert ideas and made them a little more challenging to pull, then I would have been okay with that as well.

Matt said…
Sadly I am going against the grain. I like foils and the rainbow foils from the 2015 I thought looked great. But that's also coming from someone who collected from the 90's and enjoyed that era so I am not foiled by foils
February 13, 2016 at 6:11 PM