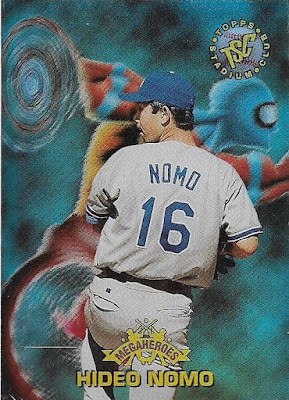 I've been blessed with good genes when it comes to basic intelligence, common sense, empathy and a sense of humor. Then there are the other genes that I wonder what I did to deserve them.

One of those less-than-desirable traits is a tendency to be scatterbrained. I get that from my grandmother, and although it's not nearly as much of a problem as it was with her, I'm a little concerned about what I will be like when I'm the age she was when I knew her.

I'm pretty sure my scatterbrained behavior cropped up when I suddenly found a decent amount of money in my COMC account and to this day have no idea how it got there.

I had just spent some COMC money from Christmas, the results of which you saw. And I know I spent all of that money. Because if I have cash to blow, I'm burning it to the ground. Nothing's getting left behind.

But, suddenly, there was a new total in my COMC account. I double-checked my emails. No reason for that money being there. I double-checked my bank account. Nothing about that new total. Also, weirdly enough, there is no record in my COMC account about the Christmas transaction. That place where you see the cards you recently purchased? They ain't there.

It's as if I created a new, separate account -- with my knowledge, mind you -- and ordered those other cards. And now I had more money. Like magic.

Now I'm old enough to know that I'll probably pay for this somehow -- in fact, I probably already paid for it and just haven't figured it out yet because of the whole scatterbrained thing. Likely, I mixed something up between paypal and COMC. But, for now, I'm clinging to the idea that I got some cards from the internet through magic. This is what the internet should have been from the start! And finally, it's come true.

So, let's see those cards that I got like magic. 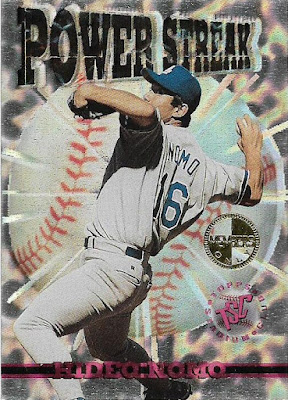 I went for some 1996 Stadium Club Hideo Nomo inserts. Because they're snazzy and for members only and glow pink when you shine light on them. Look at the size of that baseball. 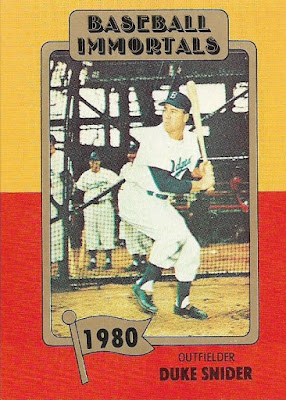 If I'm going to collect the TCMA Baseball Immortals set, the least I should do is get all the Dodgers first. Duke Snider is the latest to join the colorful-bordered blue crew. 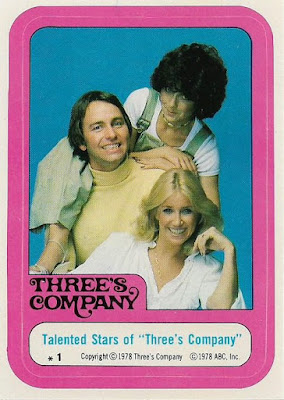 "Come on knock on our door. Free money is waiting for you ..."

This is the latest addition to my '70s TV show/movies page/binder. Three's Company had everything to do with my teenage years. Chrissy and Janet made me the man I am today -- or something like that.

This set is actually a sticker set, and that is so completely '70s. Look at how '70s it is. It's perfect. 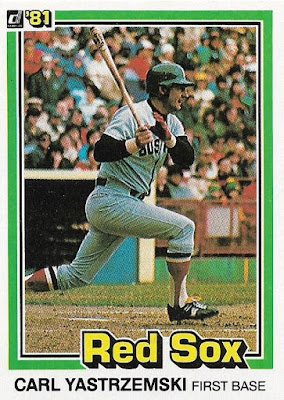 This is the card that completes the 1981 Donruss set for me. I'm not going to say more about it because I'm saving a separate completion post for sometime soon. But I love that Yaz was the last card. 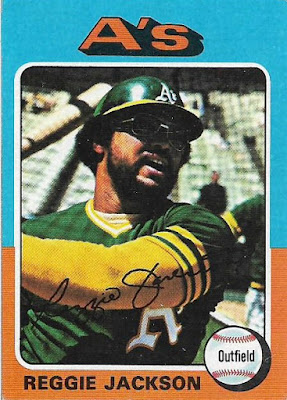 Upgrade alert: This is a mini '75 Reggie. As you know, I completed the '75 mini set with Reggie as one of the three final cards that I needed.

That Reggie had a bit of a bubblegum-staining issue on the front. Normally, I wouldn't be in a rush to upgrade something like that, but '75s are different for me. Besides, somebody wants the other Reggie, I believe:

All right, let's move into the crux of the package -- because I've always wanted to use the word "crux." 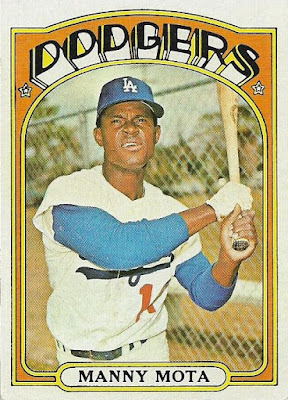 I've started to get super-serious about my 1972 Topps completion quest, which for me means tracking down the super-serious high numbers. 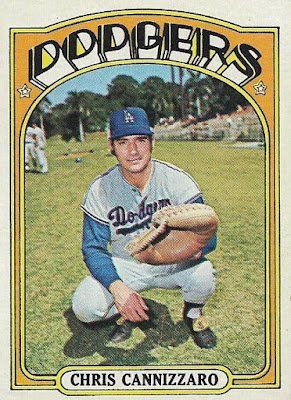 Both Mota and Cannizzaro are high-rent district '72s that I haven't gotten around to acquiring for the set task because they're already in the Dodger binders. (Incidentally, I've had the Cannizzaro card since I was a young teen, I don't know how a '72 numbered at #759 landed in my grubby Three's Company-watching hands). 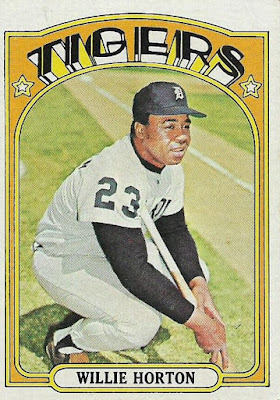 Nine positions down from Cannizzaro is this Willie Horton card, which I've seen so many times that I thought it was in my collection already. Now, it actually, really, truly is. 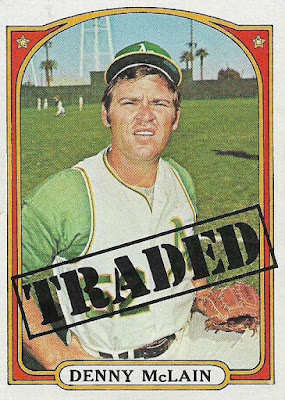 Denny McLain's been traded you guys. Can you tell? Perhaps Topps could make it bigger?

The Traded set in '72 Topps is some nasty territory -- tough cards to nab. Now, with McLain, I just need two more toughies, Morgan and Carlton. 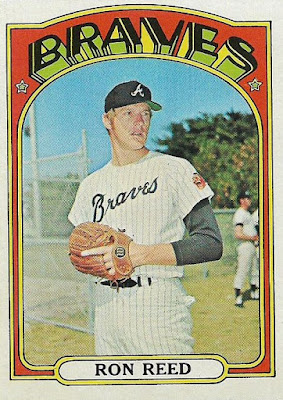 Ron Reed is the final card in the set. No. 787. This means there's no turning back. You don't purposely get the last card in the set and then not complete the set. What mad man would do that? 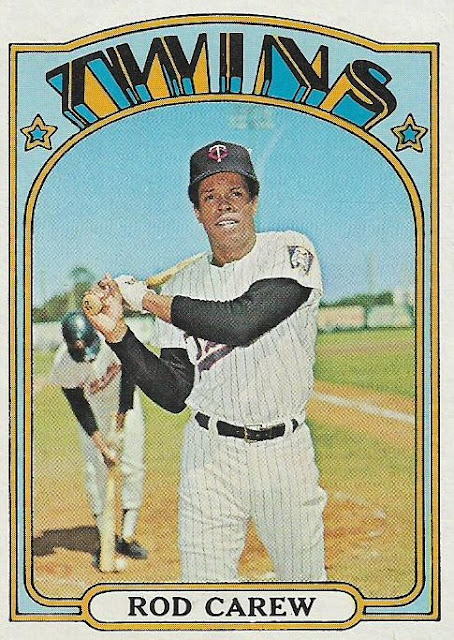 I told ya, super-serious.

Rod Carew's card in this set is very tricky. One of those cards that gem-mint, graded-card people talk about in hushed tones. I don't care about none of that stuff. A regular, old VG-EX Carew is tough enough for me. And now it's mine.

This brings me down to 43 more cards until the set is complete. I believe I can handle that before 2016 is done. Especially if I'm not collecting 2016 sets (please, please, please, let Heritage be a shocking disappointment so my wallet is spared).

I don't truly know how I got these beauties. My rational side says it wasn't magic, but my wallet.

But the scatterbrained side says, "See? I come in handy once in awhile."

acrackedbat said…
those 72s are beauties! It was your love for the 70s that originally drew me to your blog. Being here makes me feel groovy! Your excellent and creative posts keep me comin' back.
February 10, 2016 at 8:31 PM

Johnnys Trading Spot said…
Magic.... No just "Charmed". With all this 70s talk. I remembering the wooden bowls and the over sized wooden spoon and fork hanging the wall.
February 10, 2016 at 9:31 PM

Anonymous said…
"Now watch me, kids, when I twist my ring - Like magic!
WE'RE AT BURGER KING!!!"

Should you or any of your readers want to know where COMC money came from, there's a link on your dashboard (underneath "Available Store Credit") for "Store Credit History". This will show all of your financial comings and goings.

...But it's fine if you want to go with the theory that it was deposited by the Marvelous, Magical Burger King. I hear he can do most anything!
https://www.youtube.com/watch?v=jmLNNFnbI5w
February 11, 2016 at 7:45 AM

GCA said…
I know when I get on COMC at work (Shhh!) and load a cart, and then go home and get on my desktop PC, they're not there. Nor are they on my laptop. But when I come back to work, the original stuff is in the cart. I'm logged in as me each place, but I can put three different cart loads in at each machine, (they overlap most of the time). They probably clear when I buy one cartload or another.
Hope it doesn't work that way for tracking balances. If you bought your last order on one computer and are looking on another at your balance, it may be the same money. But I doubt it works the same.
February 11, 2016 at 9:49 AM

AthleticGigantes said…
Possibly. Tovar was right handed and so is the "golfer." Too bad we don't have access to Topps photo session files with Carew that could help identify the person.