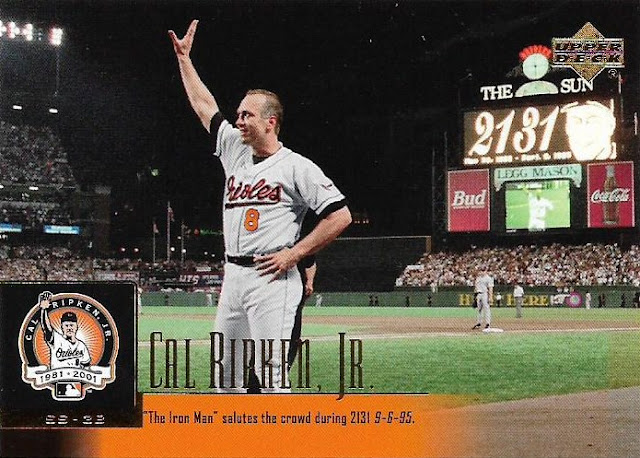 I was reserving this card from Brian of Highly Subjective and Completely Arbitrary for this particular awesome night card post. Then, in the handful of days that passed since receiving this card, I received another envelope from Brian. So I'm just lumping "Stuff from Brian" all together here.

He's really taking this Supertraders thing seriously. Rock on, brother. I wish I had the time for that kind of dedication.

Anyway, Brian sent this card because he's done his research, too. Last summer I featured the first page in my night card binder. I mentioned how the No. 4 slot was a tricky one and I was resigned to putting a Yadier Molina card from 2013 Topps in that spot, even though watching Molina, and Cardinals games in general, is not good for my blood pressure.

So, Brian sent this card from the special 8-card 2001 Upper Deck Coca-Cola commemorative Cal Ripken Jr. set. It happens to be the fourth card in the set, and Brian wondered if I a problem with the Iron Man, too.

Actually, I don't have a problem with the Iron Man -- other than his broadcasting. Please take away his microphone. But this card is terrific. And I really like the fact that it is a night card sponsored by Coca-Cola, and that they specially selected a photo that would show off the Coca-Cola logo on the scoreboard. If that was a Pepsi logo, you would no longer see right field in this photo.

Therefore, I'll be removing Molina and adding Ripken, for a much more pleasing Page 1.

Meanwhile, some of the cards Brian sent in the recent PWE: 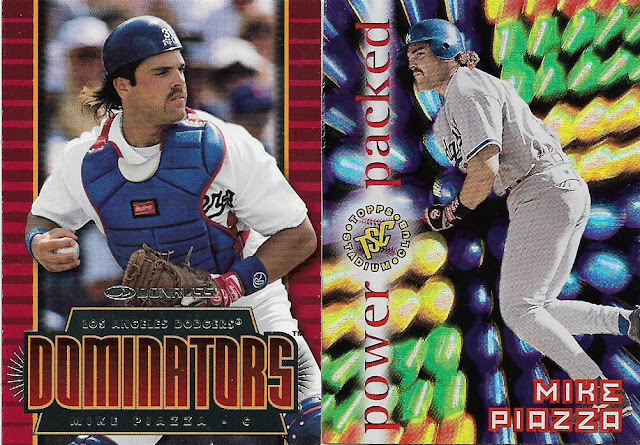 Piazza '90s insert needs. Glorious. I've recently been zeroing in on mid-1990s Stadium Club inserts that I need, and now the Power Packed one I don't have to add to the cart. Although ... the sight of it makes me want to buy 700 of them; paper a wall in my house with Piazza Power Packers; add a '70s soundsystem and disco ball; and charge admission. 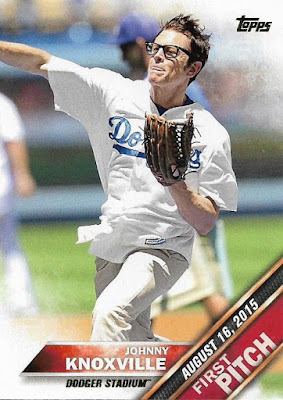 The perils of the First Pitch set: you don't get to pick the celebrities who throw out the first pitch for your team. The Dodgers get a lot of polarizing first-pitchers because they're right next to Hollywood. I've generally ignored Johnny Knoxville. I don't like pranks, stunts or extreme sports. I write for a living. I like quietude, not attitude. But in the binder he goes. Try not to hurt anybody in there, Johnny. Or yourself. 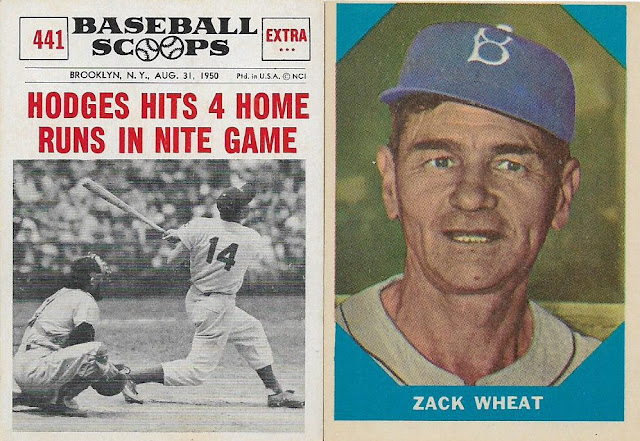 Early '60s non-Topps! Always appreciated. I've always wondered whether that photo of Gil Hodges is really him. No real reason to think that, but I just can't see his face.

All right, that's going to be it for today. I've got to get moving on some packages of my own before something else from Brian arrives in the mail.

Jeff Jones said…
The Braves got Austin Mahone in last year's First Pitch, do you still need that Steve Aoki FP card. I got your package the other day, Thanks!
February 21, 2016 at 7:58 PM

Nick said…
The more I think about it, the more I think Cal Ripken may have the best cards of any baseball player ever on the aggregate. Most of this year's First Pitch subjects are snoozers for me, but I'm keeping an eye out for the Johnny Knoxville mostly because I thought I'd never see the day where I'd be chasing a baseball card of Johnny Knoxville.
February 22, 2016 at 1:29 AM

BobWalkthePlank said…
I like Kathrine Heigl too, but her movies are sooooooo bad.
February 22, 2016 at 8:42 AM