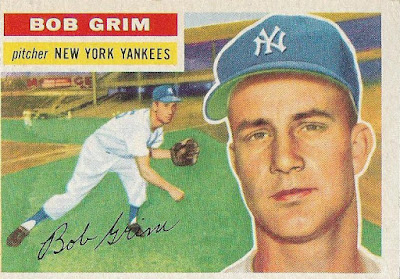 It appears that Robert of $30 a Week Habit is controlling programming on Night Owl Cards lately, but I'm bracing for another freaking high school sports Friday, so I'll take all the help I can get.

Growing up in upstate New York, just a half day's drive from Yankee Stadium, I knew the Yankees of that period better than the players on my own favorite team. They were in the newspaper, on the TV and part of the conversation in the schoolyard. Plus, the talk was louder than usual because these were the Bronx Zoo Yankees. So there were World Series games, and special ABC Thursday Night Baseball, and magazine articles, and books, for crying out loud.

I accumulated as much knowledge about the team than any Yankee fan (more knowledge, in the case of many of them).

The prevailing theme about the Yankees during that time as I was growing up is that they were always good. Everyone. Sure, there were a couple of bench scrubs named George Zeber and Mickey Klutts, but they never played. Everyone who played was good. Very good.

But the interesting thing is they never seemed to bring up the failures, the abbreviated careers, the players who never panned out. Everyone was a star or was going to be a star.

So it was a long time before I found out about Yankees players like Bob Grim.

Grim started on the path of every other amazing Yankee. After going 16-5 for Binghamton in Class A ball (my hometown), he entered the Marines during the Korean War, and didn't return to pro baseball until spring training 1954.

Grim wasn't even on the roster, but worked his way onto the team. By mid-April he was starting. He won 11 of 13 decisions. Then he won 9 of 11 decisions. By the end of the season he had won 20 games (against 6 losses) and won the AL Rookie of the Year award (Al Kaline finished a distant third). Grim and Pedro Martinez are the only pitchers to win 20 games with less than 200 innings pitched.

This is where Rizzuto, and others who loved to extol Yankees greatness, would end the story.

And, I'm sure sometimes Grim wished it could end there. But it didn't.

He started feeling pain in his arm the very next year. His pitching coach said it was in his head. But it wasn't. After struggling through his sophomore year, the arm problems continued until he was sent to the bullpen. He did all right for the Yankees in 1957 as a relief pitcher, but he was soon traded to Kansas City, and spent the rest of his career bouncing between teams.

After his baseball career, he worked as a bartender at his father's bar in his native Brooklyn. He also worked on a fishing boat, sold newspapers door to door, and became a liquor salesman. The stories of the next Yankee great had long since disappeared, replaced by just one great season in 1954.

Grim later said that the slider, a relatively new pitch in the 1950s, helped ruin his arm. He was a hard thrower, not a finesse pitcher, and he didn't know how to master the pitch.

Even though he was a native, Grim didn't feel comfortable playing in New York, disliking the crush of people. "People were always bugging me for tickets," he once said. And a few years after his retirement, he moved to Kansas City.

Grim died of a heart attack in 1996 after getting into a snowball fight with neighborhood kids. He was 66. 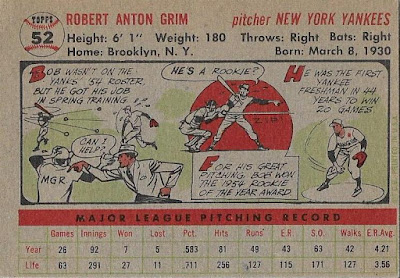 We often hear about the rookies who shined brightly for a year or two and then crashed and burned. Mark Fidrych, Joe Charboneau, Bob Hamelin, Herb Score, Steve Howe. Their stories are told over and over and over.

What do they all have in common? None of them won their rookie of the year award as a Yankee.

This could be that the Yankees have enjoyed tremendous luck, or are terrific at bringing along top-notch talent, or are equally terrific at extolling their best players and whisking the ones that didn't pan out under the rug.

I have a feeling it's a combination of all of those.

While other organizations embrace their failures, some to a disturbing degree (i.e. the Cubs), the Yankees seem to have an incredible fear of failure. Do you know how long it took me to figure out who Jerry Kenney and Horace Clarke were? They played a mere handful of years before I grew up on the late '70s Yankees. Yet it was as if they never existed, because the teams they played on didn't succeed.

I guess that's what makes them the Yankees. And why people both love and hate them.

AthleticGigantes said…
Great research on Grim and insight on the Yankee practice.
I remember Horace Clarke. His 1969 card is one of several 69 cards I salvaged from my friends dad's VW single cab truck bed that was full of garbage and yard clippings. I must have been 5 or 6 years old.
Here is a short list of some of those cards that I cberish:
Rich Nye (Cubs)
Maury Wills (Expos)
Mike Marshall (Pilots)
Gary Peters (Whire Sox)
Chico Salmon (Pilots)
Joe Foy (Royals)
Checklist w. Denny McLain
and of course you know who on the Yankees that should not be named (his initials are H.C.)
I still have these cards and I would never trade them because these are the first cards I pulled (from the garbage). None the less they are keepers.

Robert said…
Controlling programming on the Night Owl blog? Has to be one helluva remote to do that...
February 26, 2016 at 9:08 PM

Bo said…
Maybe in the '70s but some recent flameouts are pretty widely recognized, such as Kevin Maas, Shane Spencer of Shelley Duncan
February 27, 2016 at 11:15 PM