The bittersweet demise of a disgusting habit 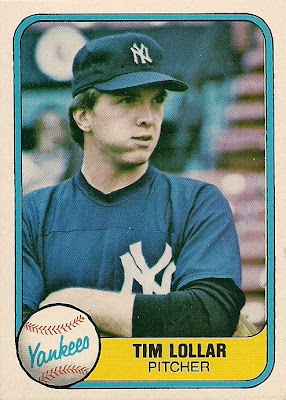 I pulled this card last weekend out of a Fairfield rack pack. I twittered the entire pack of 100 cards, much to my audience's chagrin, I'm sure. But I had a lot of fun.

This card was my favorite out of the entire pack, and only a small part of it is because it's a 1981 Fleer card that I needed.

The photo represents a bygone era. And that era is "The Era Of A Disgusting Habit." It was an era when baseball-playing men were unashamed to appear on little rectangles of cardboard with a great wad of tobacco in their cheek.

As a kid, I would seek out cards in which I could tell players were packing away a chaw. And I would get excited when I pulled a card of someone who looked like he could spit for days.

I'm not sure why this intrigued me so. I blame part of it on this Sports Illustrated article that I read at a young age. 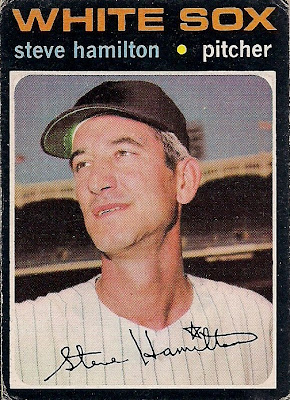 Thanks to that article, I knew at age 11 that former pitcher Steve Hamilton threw up on the mound on national TV after swallowing his tobacco. Cool! 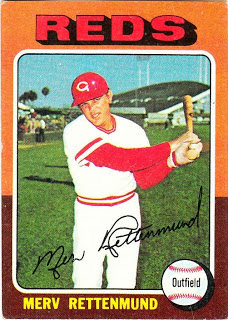 Thanks to that article, I knew that Merv Rettenmund used to chew a few fresh sticks of bubble gum, pull them out of his mouth, spread them out in his knee, plop a lump of tobacco into it, wrap the gum around it, and put it back in his mouth. Sounded like a fantastic taste treat to me. 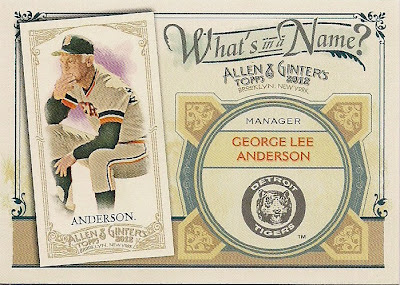 Thanks to that article, I knew that manager Sparky Anderson's son, who was 14 at the time, had a spittoon in his room. I couldn't wait until I was 14 and could get my own spittoon. Hell, I just wanted to say "spittoon" to my friends. 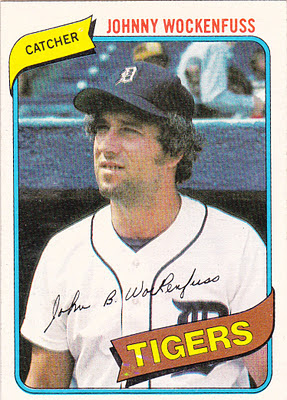 Thanks to that article, I knew that Johnny Wockenfuss -- I'm quite sure that was the first place where I encounted the name "Wockenfuss" -- wrapped his gum around his tobacco like a ball of twine. But he gave that up for just chomping off a slab of plug tobacco, right there in the dugout. 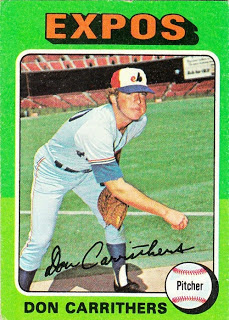 Thanks to that article, I knew that pitcher Don Carrithers' wife didn't like him spitting in the house. "We have a little baby you know," he said.

I know that article was supposed to offend people. Perhaps scare a few people straight.

But it didn't do the trick for me. I would repeat lines from the article out loud just to get a reaction from my mom.

I couldn't wait until I could take a chomp of plug tobacco. I imagined it was something like chewing a great big candy bar. Except cooler. Because of all the spit.

If that wasn't enough, Carlton Fisk was right there on TV and in magazine pages selling Copenhagen. That's smokeless tobacco, you know. I had the tins of Copenhagen, Skoal and Happy Days memorized by color. Fisk even showed you how to put it in your mouth.

I might as well have been hooked on the stuff right there in my living room.

Unfortunately, then I grew up.

As I got to the age where I'd play games with kids outside my neighborhood, I'd see some guys -- fellow teenagers -- chewing tobacco. They'd spit, and gobs of brown stuff would come out, and I wasn't impressed anymore. I'd almost get ill looking at it. I once saw the inside of one kid's mouth when he was laughing and it was horrifying.

I couldn't imagine what the mouth on a guy like Rocky Bridges -- who was so conditioned to chewing that it didn't bother him in the least when he swallowed his chaw -- looked like. Probably the inside of mudslide.

Then, I got braces. And chewing of any kind was forbidden.

That wasn't because I was afraid of screwing up my costly dental devices. It was because my screaming, raging orthodontist freaked me out.

Besides, there are enough photos and testimonials out there that make me glad I didn't.

But I still miss those commercials that are no longer on TV. And I miss the cards of the players, who either no longer chew, or no longer want to be seen chewing on cards. Or may Topps just photoshops it out to be politically correct. I don't know.

So, for me, that's another reason to collect vintage.

You never know when you might find a player whose got a great big wad of gumbacco in his yapper.

Anonymous said…
When I was a college freshman, a friend got a free can of Skoal, so we figured we'd give it a try.

Reds Card Collector said…
I still think the best card with a player munchin on his chew is the 57 Topps Rocky Bridges card. Can't wait to add that one to my collection.
December 10, 2012 at 8:47 AM

(...Joe) said…
My friend takes shredded beef jerky and packs it just like you would chewing tobacco. I've tried it a few times but never made it past the first few seconds. The temptation to chew and eat is just to great for me.
December 10, 2012 at 11:05 AM

Brandon said…
When I was a teen I really wanted to like chew. Tried several kinds..gave it up. Thank goodness.

Chewing tobacco has been such an ingrained part o baseball but as I got older it struck me as odd. Imagine Peyton Manning dropping back in the pocket with a wad of Copenhagen in his cheek or Kobe Bryant walking away from the free throw line for a moment to expectorate into the courtside spittoon.

I do however confess to doing the beef jerky thing as described in the above comment from time to time.

Fuji said…
I remember in little league, my buddy and I would fill our mouths with sunflower seeds to look like were chewing... seemed so cool back in the day.

Michael Chase said…
Im really glad I looked back through your recent posts and found this one! I quit chewing tobacco about a week ago and wrote a little post about it. Its by far not as good as this post as I couldnt find too many cards i own with players chewing. If you have any more cards featuring guys with their cud, I would enjoy another post from you about the subject matter!
December 21, 2012 at 5:06 PM