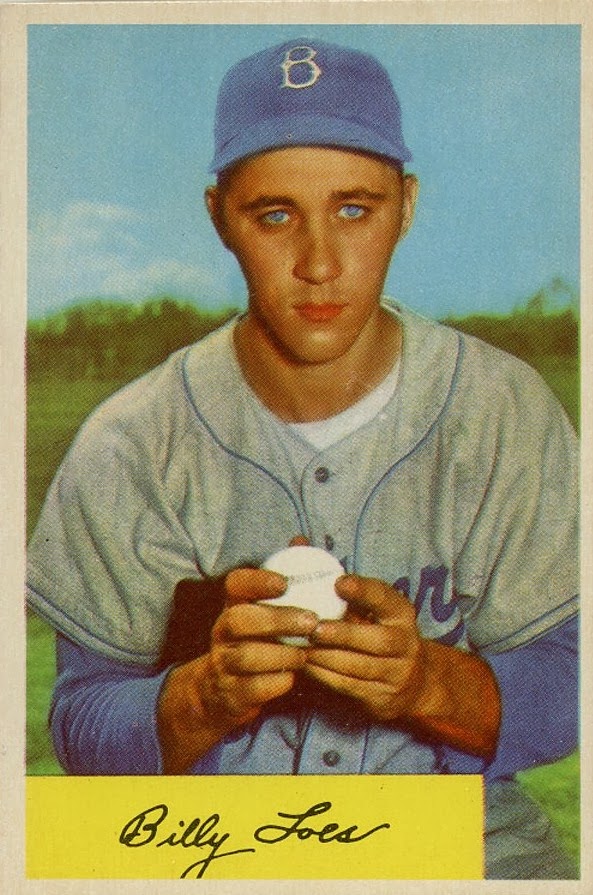 I think we can all admit that we've screwed up at a card show.

There was the time when we brought home a semi-high-priced need only to realize it was a duplicate. From eureka to shame in a matter of hours.

There was the time when we walked out of the building, into our car, up the highway, and 20 minutes later realized we didn't look for the card we specifically set out to find. Facepalms all the way home.

Or there was the time when we saw a card we wanted, left it because we wanted to check out another table, and then came back only to find it gone. If the dealer blew on you, he could've knocked you over.

I know all these well.

But the one blunder that I always remember and probably will never forget is one I've mentioned in passing on a few blog posts over the years. It was my opportunity to get that 1954 Bowman Billy Loes card that you see there (well, not THAT exact card -- it's in far too nice a shape for my budget).

Isn't it beautiful? That might be the greatest '54 Bowman card I've ever seen.

But I held that Billy Loes card in my hand, along with another '54 Bowman Dodger, and these actual words came out of my mouth: "No thanks."

My past is filled with stupid.

This happened probably around 2007 or 2008. It was at a summer card show. The dealer with the cards I have dealt with a number of times. He's the man who sold me the 1956 Topps Duke Snider. And I've obtained other cards from him, too.

But back then I probably had seen him only one other time. He found out I was interested in Dodgers and I thought maybe he'd have some '56s for me to review. Instead he handed me Loes and his '54 Bowman companion and told me how beautiful they were.

I was in a different place then. I knew what I liked and it wasn't Bowman. No kind of Bowman. Current stuff. Stuff from the '50s. Wasn't interested. I was even more of a Topps guy then than I am now.

"No thanks," I said. And I think I just bought a handful of 1971 Topps from him instead (not a frivolous purchase, but not cards from the '50s either).

At the time, I owned just one other 1954 Bowman. That card meant a lot to me, and maybe it overshadowed any other '54 Bowman. Or maybe I didn't like the watercolor look at the time.

A few weeks ago, a 1954 Bowman popped up on The Sandlot blog. Joe was looking to start a trade. Was anyone interested? 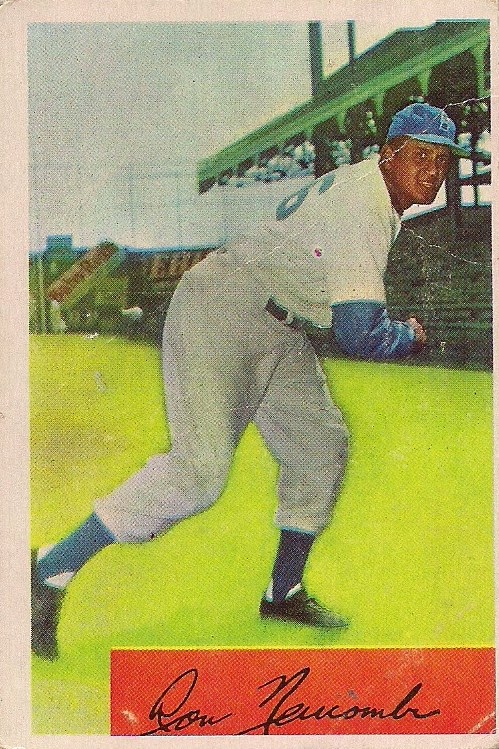 And now 1954 Bowman Don Newcombe is mine. Where I can read the back and great prose such as this:

"Dodger fans will be glad to welcome him home but opposing batters are not looking forward to the prospect of again having to face his slants."

A) That's a lot of extra words there. We're not writing an essay for English class here.
B) "Slants" is a wonderful archaic baseball word.

I guess you could say I've come around on '54 Bowman because I now own maybe 6 or 7 of them, mostly Dodgers.

Still don't have the Loes yet.

The Newcombe eases the pain quite a bit. But until I get that Loes, it'll be my biggest card show blunder.

petethan said…
Loes looks like he's being asked to part with a ball given to him by his dear long-lost grandfather, or something...
February 7, 2014 at 8:57 PM

AdamE said…
You know how I told you that I had a Bowman Preacher for you? It took awhile but I finally got it to you. Same thing goes with the 54 Billy Loes. Consider it your, eventually.
February 8, 2014 at 12:40 AM

BobWalkthePlank said…
It is rough thinking about all the cards I passed up in my day. No I don't think that Peyton Manning guy is that good. Give me all your Ryan Leaf's please.....
February 8, 2014 at 1:46 AM