When Dave Fleming was going to make us all rich

I'm getting to that age where I start losing memories of entire years. That sounds like something is terribly wrong with me, but I think it's just me getting old.

For example, 1993. I remember where I was living, where my job was, and some people I knew at the time. I remember that I became immersed in alternative rock music of the time -- Smashing Pumpkins, Cracker, the Breeders, Belly, etc. I remember Mitch Williams' gopher ball to Joe Carter. And I remember it was the year I changed my card habits in a major way and shunned all other brands for Upper Deck.

As for the rest of the year, I'd have to do some research and look through some pictures. But I fear the small moments and nuances from the year, which I have down to sight, taste and smell for, say, 1977, are probably lost forever.

That means I have to guess on some stuff that I actually lived through, llike why is Dave Fleming the cover boy on 1993 Pinnacle? Isn't that the same high-hat Mariner that I was pulling constantly in 1992? Was he good or something?

I looked at his stats and ... damn, he was good in '92. Not bad in 1993, too. I suppose, knowing how people thought about cards in the early '90s, that he was one of those newbie players that were going to make all the collectors rich.

Now nobody mentions Dave Fleming anymore. And old guys like me can't even remember what he did. And if that's a bummer for me, imagine what it is for Mr. Fleming.

But at least he's on a pack of cards that I've never opened before! Yay, it's pack break time!

This fat package of 27 major league baseball player cards was sent to me by Shoebox Legends. He sent another pack of something else that you'll see later.

1993 Pinnacle followed the popular debut of '92 Pinnacle. I loved '92 Pinnacle so much that I wanted to marry it. I don't know what happened with Pinnacle in '93. Perhaps a divorce was involved. Like I said, '93 is a blur now.

This is a pack of Series 1. I guess the big guy to get is Derek Jeter. But he's in Series 2. The only Dodger I need from this set is also in Series 2 -- Jim Gott. Yes, Jim Gott. You can expect to see him on the Nebulous 9 sometime soon.

And of course I probably need some inserts, too. But I've babbled enough. Here are some cards: 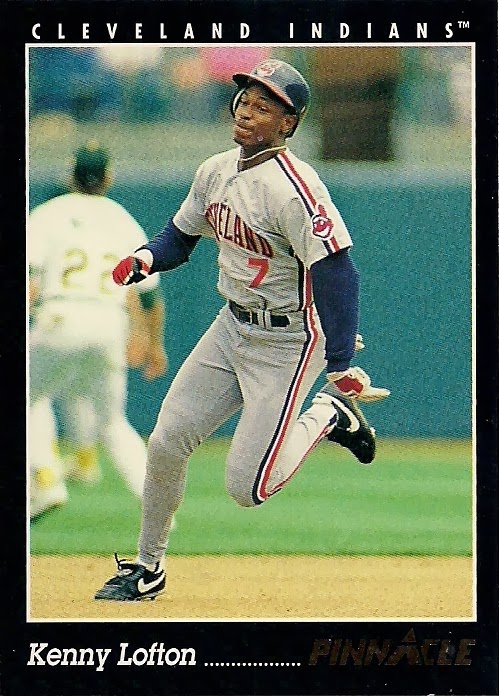 There's a look at one of the greatest black-bordered designs of all-time. Sleek and clean. And Pinnacle did something smart and made the brand name foil, but left the player name alone. 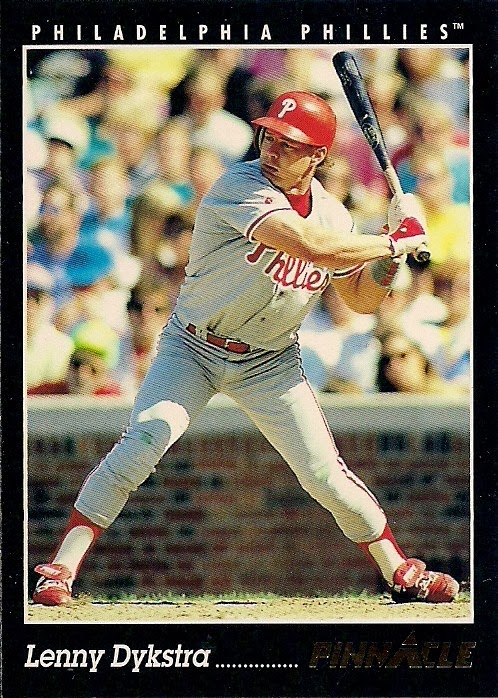 Pulling a card on the same day a player celebrates his birthday is very cool. 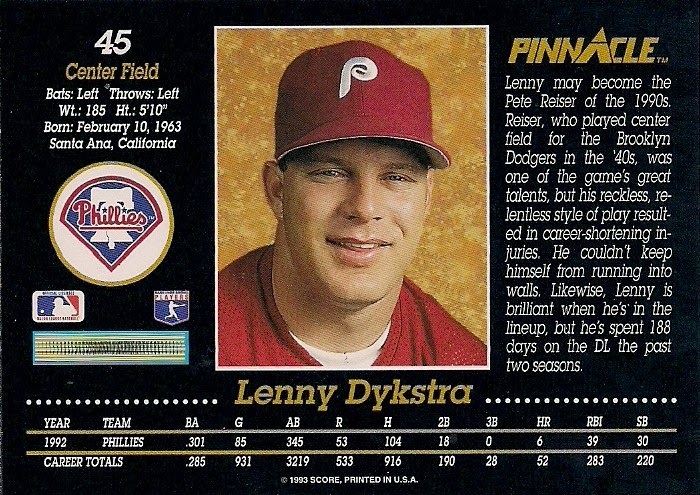 There's the very classy back. The write-up is kind of morbid, implying that Dykstra was going to ruin his career prematurely. Whatever happened to "teammates love his grittiness"? 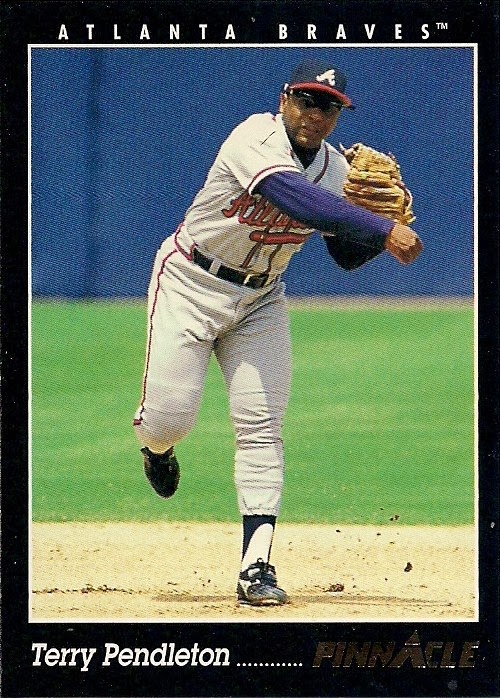 Nothing but early '90s stars in this pack.

I'm mad at him for being the Diamondbacks pitching coach for two years. No picture. 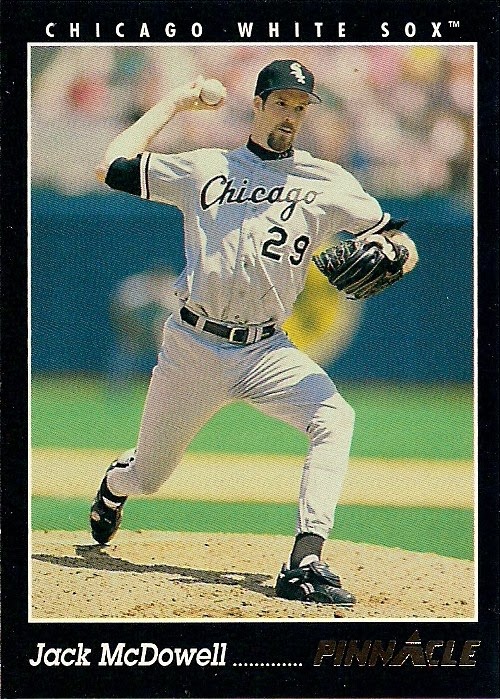 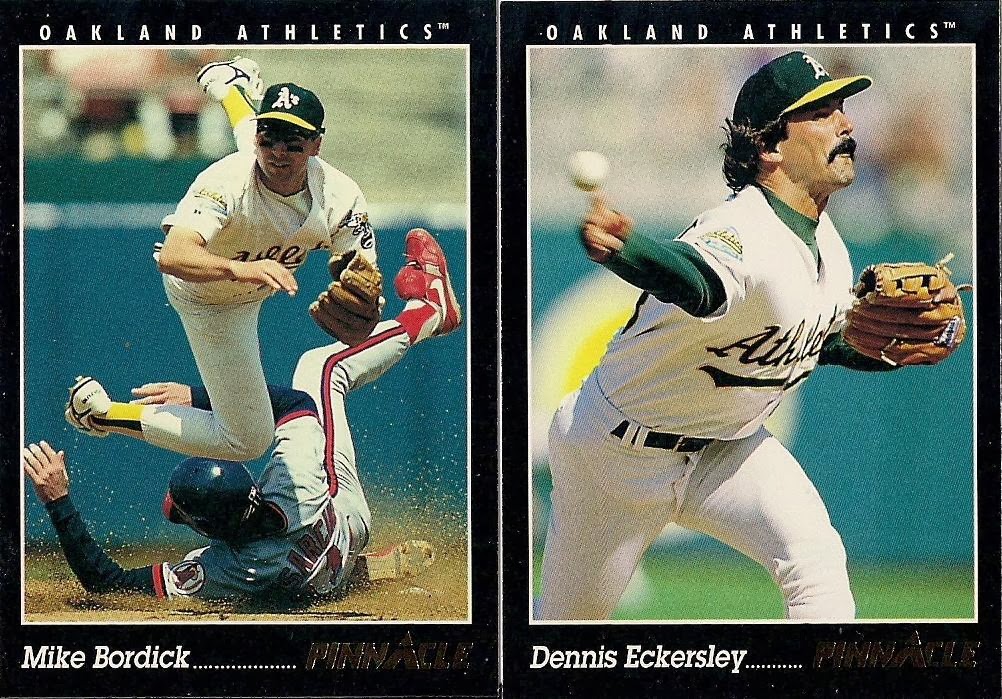 Wouldn't be a night owl pack without a few A's. 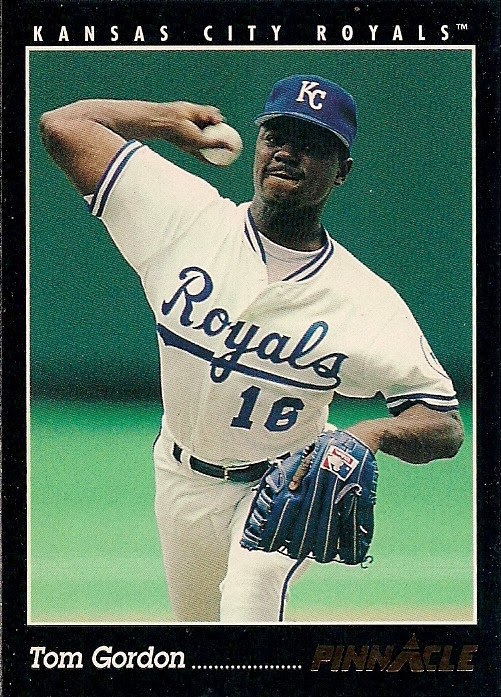 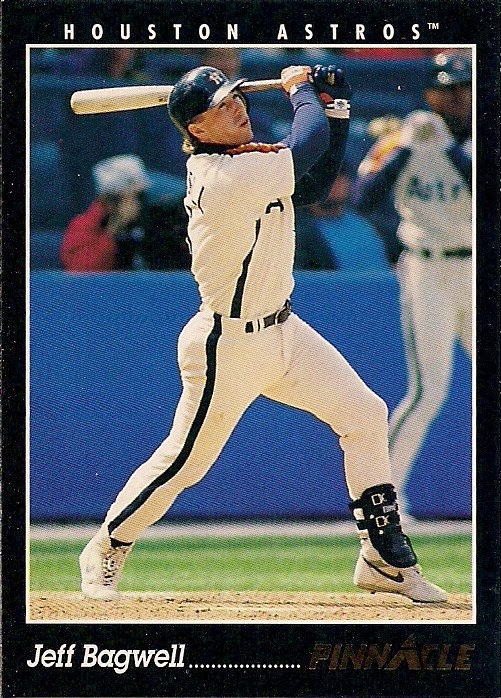 Wow, no commons in this pack! Bagwell was already a superstar two years into the majors. 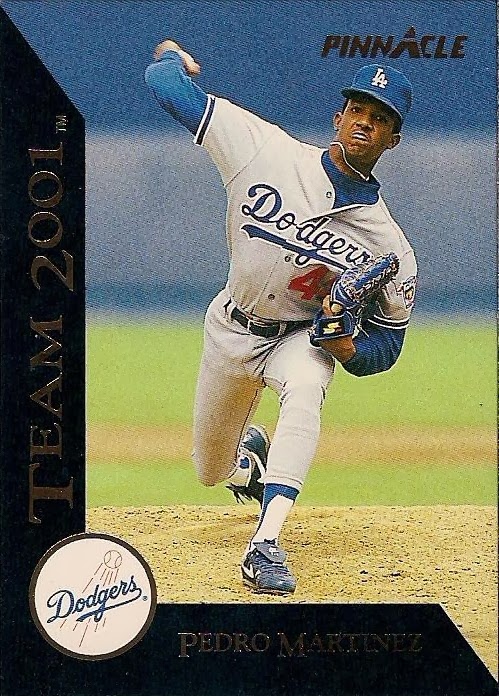 Woooooooooooooo!!!! A Dodger insert I need. Of Pedro. Before he was squandered for some tepid second baseman. 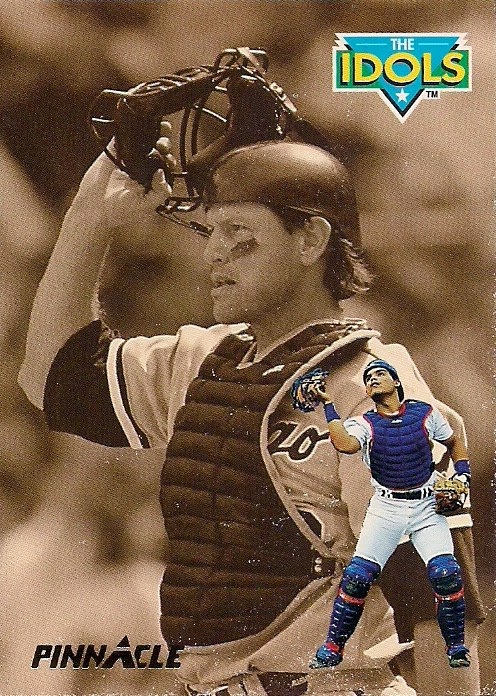 This card was stuck to the back of Pedro, so it's a little scuffed. Fine subset, though. 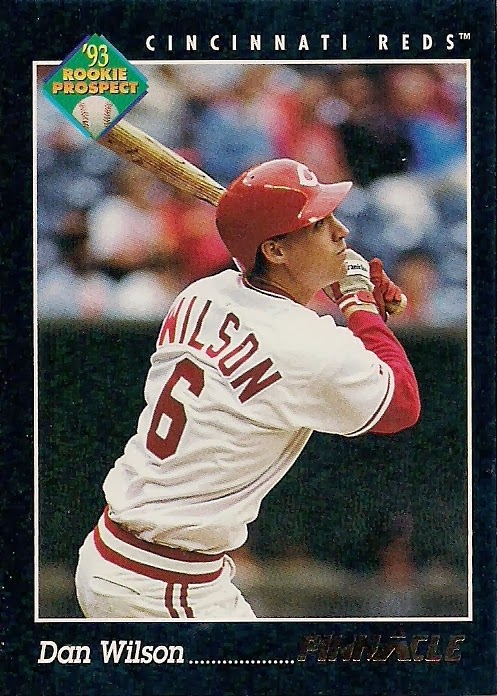 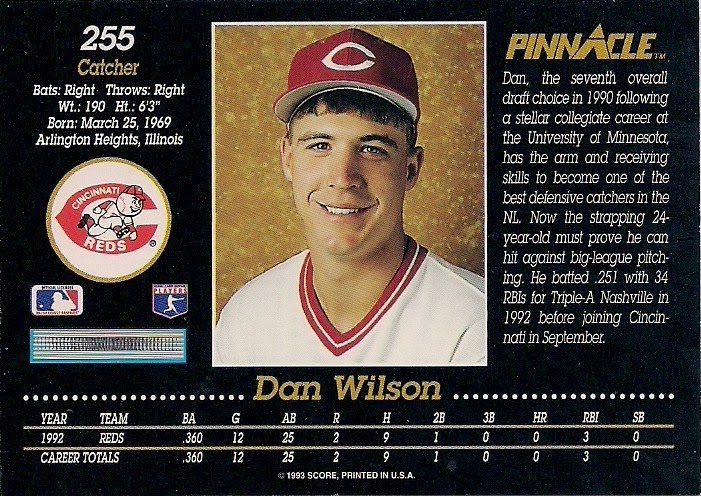 The first rookie prospect in the pack, with his unfortunate haircut. 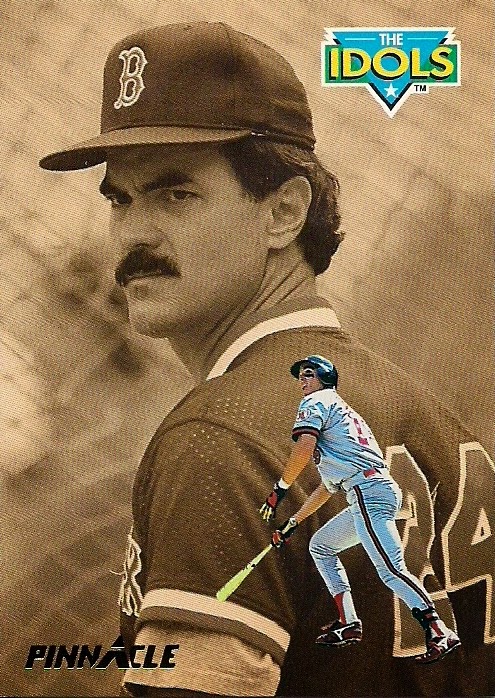 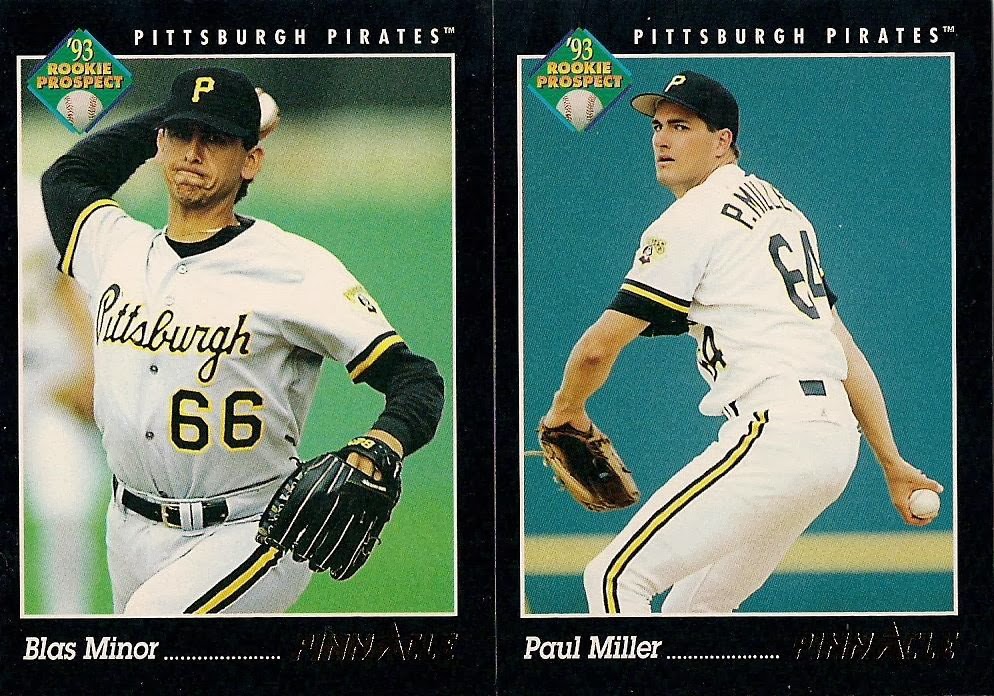 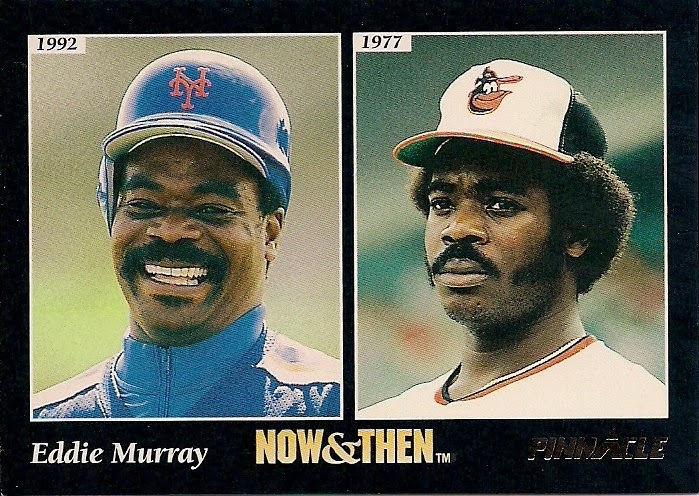 Wow, this is a great card, too. Sort of a reverse Super Veteran card. Maybe I SHOULD collect this set. 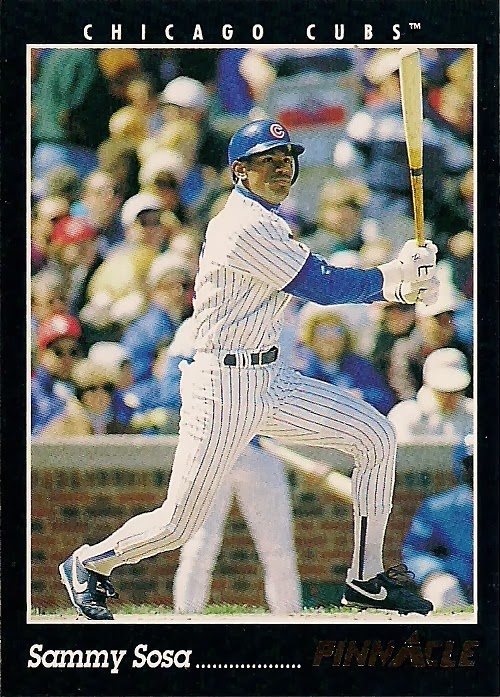 Before he crossed over into Michael Jackson territory. 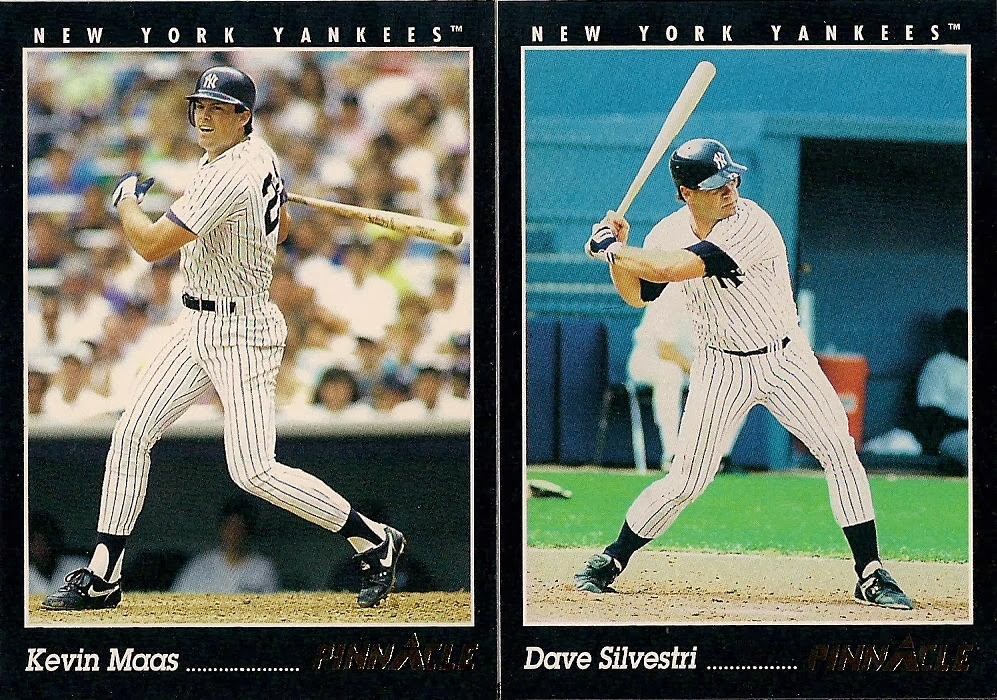 More back-to-backers, of fizzled out prospects 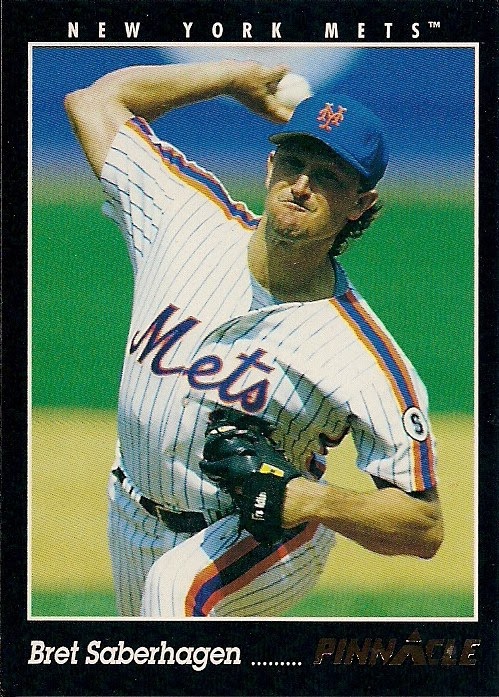 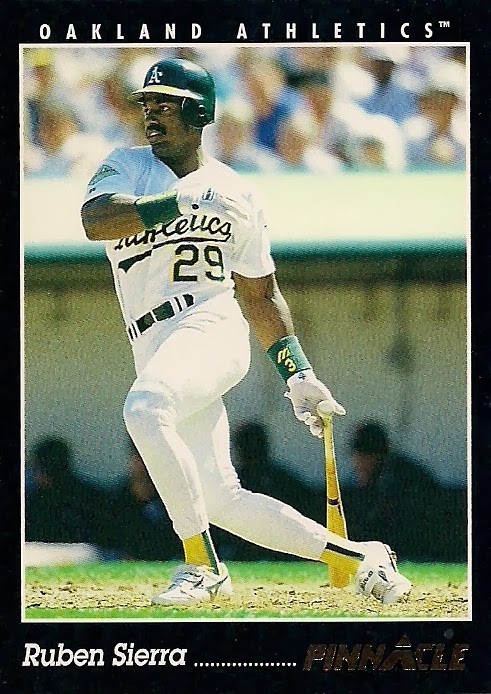 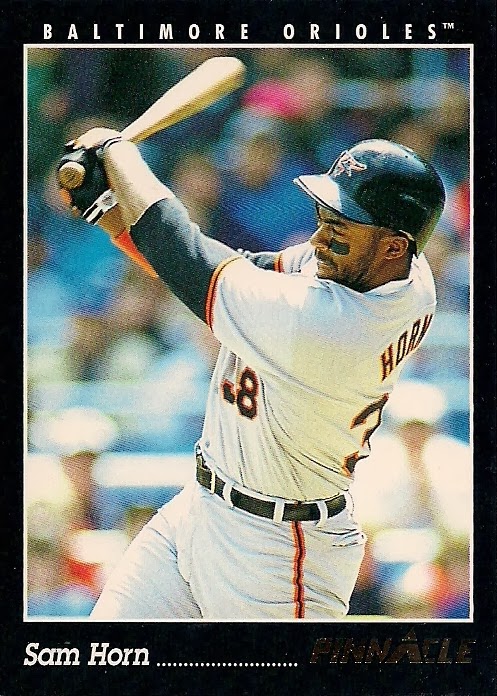 That's the end of the pack.

That's some kind of detail.

Anyway, that pack break was kind of a revelation. The more I posted these cards, the more I loved "the ellipsis set."

I generally avoid attempting to complete sets from the early '90s as it's an unpleasant time for me and, because of that, I project on a lot of sets (I can't wait to get rid of every last one of my 1992 Donruss cards).

But in a weak moment, I could see myself attempting to complete this one.

Still, give me five more years. I'll probably forget that this set even existed in 1993.

And I'll think Dave Fleming is my caretaker in the nursing home.

The Lost Collector said…
I actually have fond memories of this set. In September of 1993, I was in the hospital with pneumonia for a few days. One of my family's friends brought me a few packs of baseball, as well as the "baseball card price guide." Remember those? It was a fat, bible-shaped price guides that listed every card. Worked better as a checklist, of course.

Anyhow, there was a back of 1993 Pinnacle in there, and I remember getting a Team 2001 Dean Palmer. 1993 Pinnacle always brings me back to Wilson Hospital, but it's not a bad memory. Just sort of defines where I was then, like when a song brings you back to a certain time.
February 10, 2014 at 8:11 PM

shoeboxlegends said…
Nice, I don't think I could possibly have chosen a better pack from that box to ship to you. Glad you needed that Pedro!
February 10, 2014 at 8:23 PM

a) That is a damn fine Black Jack card. The colors make it work so well.
b) I agree they should stop with the player's name in foil and just use it on the logo. Or better yet - NOT AT ALL!
c) I have a slot in a binder page if that Bordick needs to leave your residence.
d) While Sosa and Sierra's fake stirrups are pretty bad, the really crappy 2-in-1s on Pedro are the worst.
e) Interesting that Paul Miller had FIOB (that's first initial on back) when there was no other Miller on the team in '92.
February 10, 2014 at 9:46 PM

Anonymous said…
I didn't care about Dave Fleming because by that point I'd already amassed my wealth off of Todd Van Poppel cards.

defgav said…
Ah, Smashing Pumpkins, Cracker, the Breeders, Belly.. I owned CDs from all those guys, and in fact all are still well represented in my iTunes. Maybe it's the old adage that people often think the 4 years they were in high school was the greatest time for music, but yeah, for me, 1993-1994 is what I think of as my favorite moment in time, musically speaking.
February 11, 2014 at 2:16 PM

Need More Cardboard said…
They could put that write-up for the Dykstra card on the back of a Bryce Harper card now.
February 11, 2014 at 8:27 PM

Fuji said…
It's funny how music and the past are forever tied together. Ironically I do the same thing with cards.
February 13, 2014 at 2:46 PM