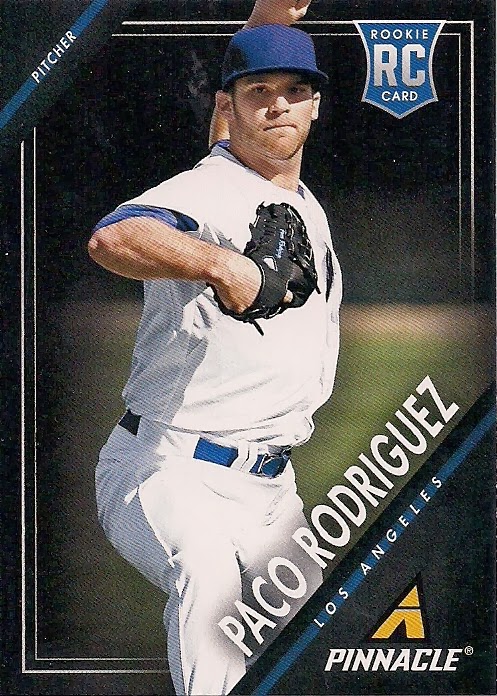 Freaked you out a little with that title, huh?

Don't worry, there's plenty of inspiration on tap for this blog, even in these energy-sapping winter times.

What I am referring to is my existence as a team collector.

I still love the Dodgers and all of their cards, of course. It's just that I feel my grip slipping on every card that's Dodgerish, especially for more recent sets. I feel that I'm not as serious of a team collector as I was three years ago.

Take this Panini Pinnacle card of Paco Rodriguez (gosh, that's a lot of "Ps"). It arrived from Adam of ARPSmith's Sportscard Obsession -- you'll see more cards from him very soon. I took one look at it and knew that I didn't have it yet.

But there was no number on a want list to cross off. Because I had never created a want list for 2013 Panini Pinnacle.

But if you look at the 2013 portion for each card brand, you'll note that it's not quite up to date. I don't seem to have the obsession with getting the very latest updates to the want list.

I like to blame this one on Topps' endless parallel bombardment and a bunch of Bowman sets that confuse the hell out of me year after year. Who has the time or the desire to sort all that out? Not me anymore.

So, I think that's what it is. I don't have to worry about tiring of being a team collector. Because my interest in completing Dodger sets from the '50s or '60s or '70s hasn't ended at all.

But as far as current sets, the realization that it's impossible to complete a modern set has officially taken its toll on the want list page, and my zeal to complete a team set. If you actually think that I'm going to list the numbers for every parallel for every Dodger in 2014 Topps then I am sorry I will be disappointing you.

Oh, you can still send current Dodgers to my address and I'll blog about them as enthusiastically as I can.

But don't expect me to always cross a number off a want list afterward. Because the list could be nonexistent.

Yup, Topps has gone and killed the buzz again.

Paul Hadsall said…
There's no "one right way" to do anything, even being a team collector. I know one Mets blogger who looks for one card of each player who appears in a game for the team. He'll upgrade if he can replace a non-Mets card with a Mets-system minor league card or a Mets card, but one is enough for his binder.

Mark Hoyle said…
Being a team collector myself I don't stresses about trying to complete every set that is now out there. Don't get me wrong I will take any card from any brand if it is my team but there is just to much stuff. I find myself continuing to go back and buy older cards.
February 16, 2014 at 8:58 PM

Nachos Grande said…
You know, I've been feeling the same way about random Reds cards. I used to jump at the chance, now I'm more interested in Larkin cards only (plus all the sets I'm still working on like the fool that I am). Basically, it's hard to get excited about a Bowman card of some Reds player that I've never even heard of.
February 16, 2014 at 9:17 PM

Unknown said…
We all have periods of blah, And with you're followers im sure the sets you don't know about or ultimately want, will arrive in PWE
February 17, 2014 at 1:31 AM

Fuji said…
I gave up trying to chase down ever single card of every single team a long time ago. I obviously enjoy getting as many A's and Padres cards as I can, but I don't place any specific expectations.
February 17, 2014 at 1:50 AM