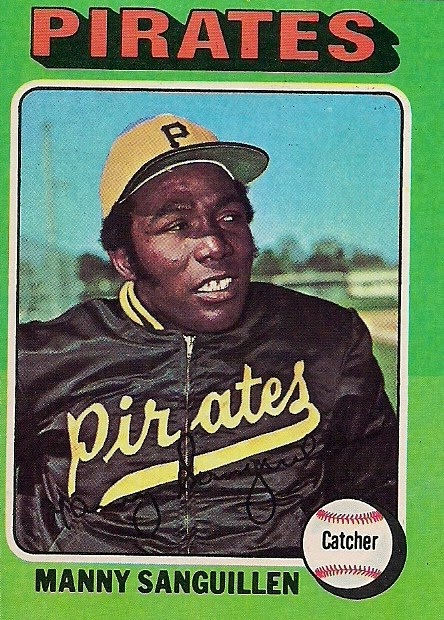 I just counted how many 1975 Topps minis I need to complete the set. And it happens to be exactly 100.

I consider that a milestone to celebrate.

If you knew what I have heard about collecting '75 minis my whole collecting life, you would be aware of how mind-blowing it is that I am just 100 cards away. Long before we were bombarded with "rare cards" and artificial scarcity, '75 minis were considered one of the more difficult cards to obtain from the '70s and '80s era.

The person who got me down to 100 is The Junior Junkie. T.J. has this guy that he knows at card shows who always has '75 minis. In fact, he calls him "his mini guy." I really, really need one of those guys in my life. Where do you get one?

But a sad little note accompanied this latest package of '75 minis. It said -- let me wipe away some tears here so I can read it:

"This is the last of my mini guy's commons." 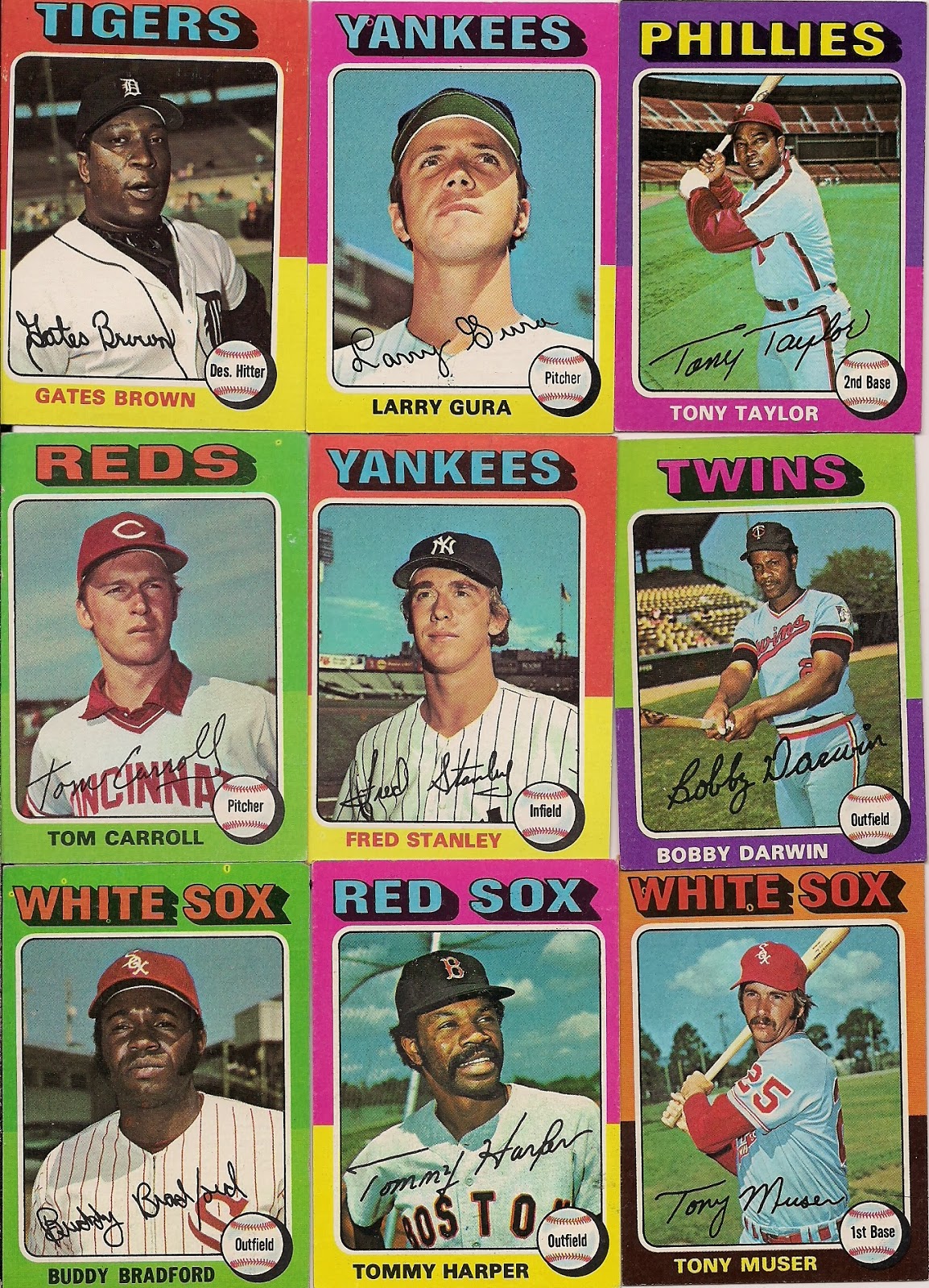 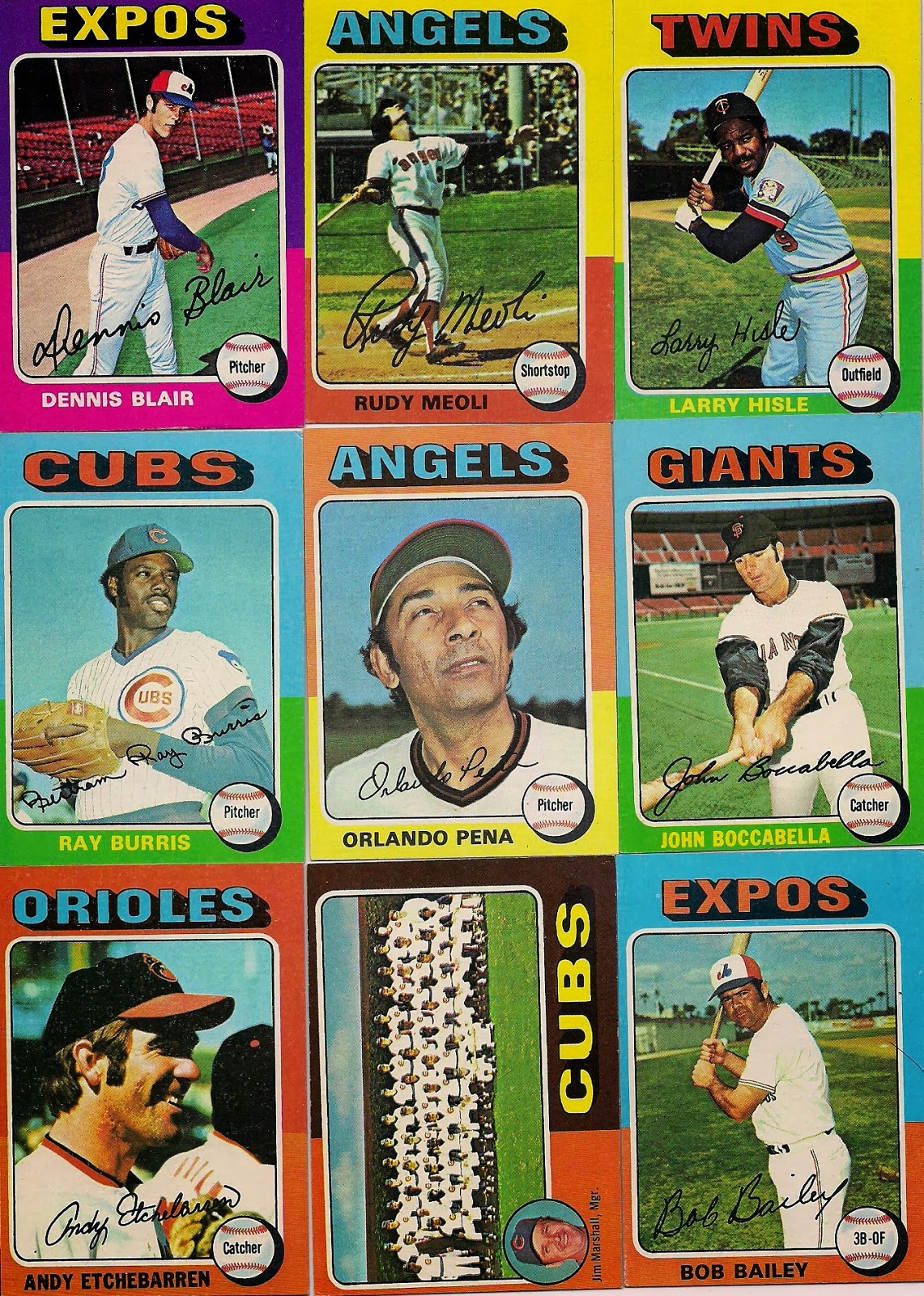 Look, you can play that very '70s game -- One Of These Things Is Not Like The Other -- with these very '70s cards! Darrel Chaney is the only one who does not have a mustache. For shame, Mr. Chaney.

Of course, 100 cards to go also means that time is running out for UltraPro to churn out that 1975 mini-style page. I know they're working on it. But as soon as I pull that George Brett or Hank Aaron mini out of that package as the last card that I need to complete the set, there better damn well be some mini-style pages waiting in the card room.

The Junior Junkie also sent me some other non-mini cards that were almost as fun. 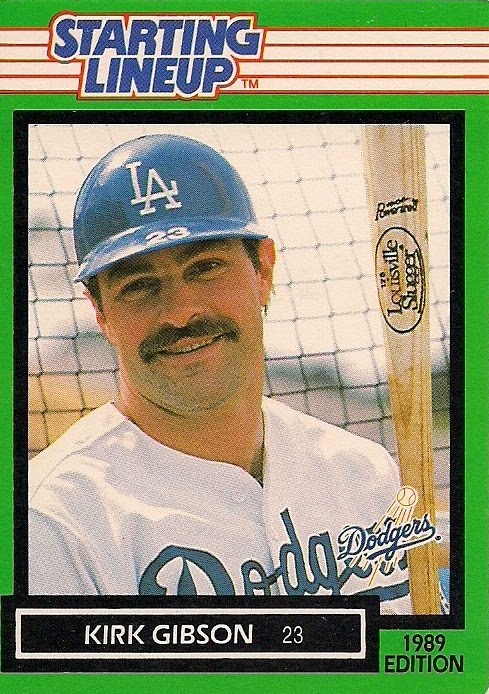 I've had my eye on Starting Lineup Dodgers more and more, and this is one of the greatest ones. I'm very conflicted these days by Kirk Gibson, as I believe he is at least somewhat to blame for turning the Diamondbacks into a bunch of asses. But I'm hoping things can be a little more civil and Kirk can return to being the guy who hit that home run. 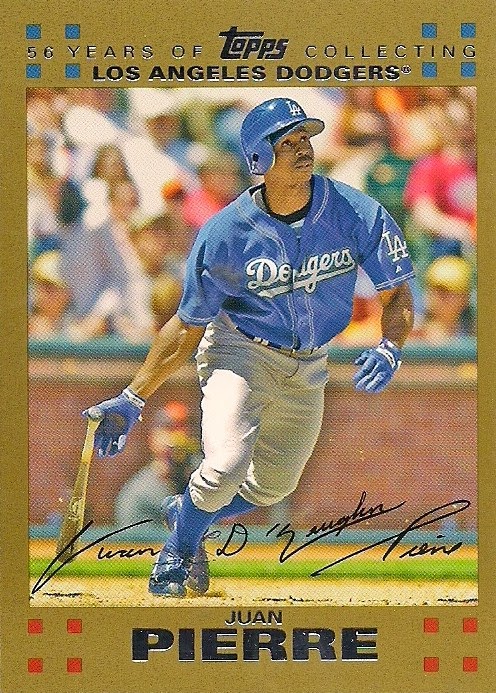 Who doesn't want a gold card of a poorly photoshopped Juan D'Vaughn Pierre in their collection? I certainly don't want to be the guy without one. 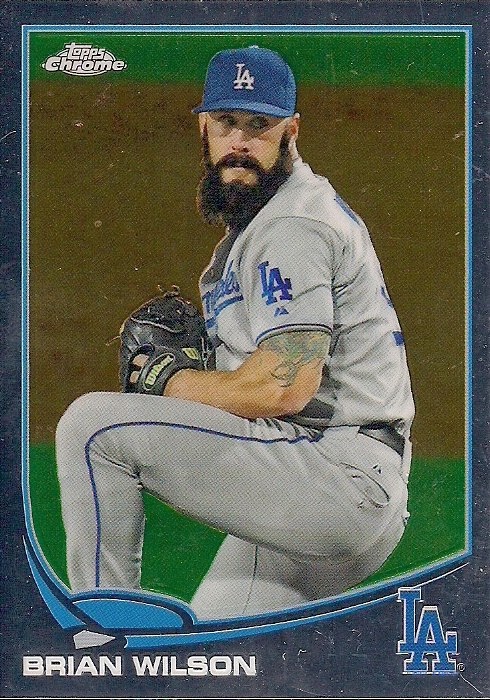 This is one of those Chrome mega-box Dodgers. This is the fourth Dodger that I have. The set is like 55 cards. I hope there are no more. Give Mariners fans something to chase for once. 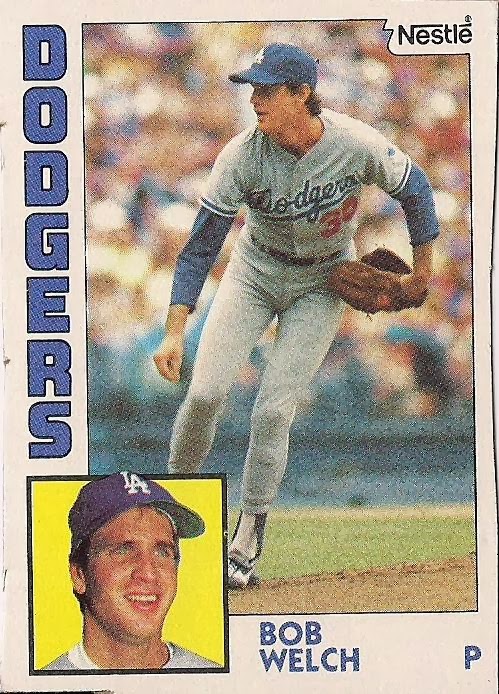 Very nice. This is my first Dodger from the 1984 Nestle set. From what I've read, the cards were issued only in uncut sheets and they were bought up and then cut into individual cards by folks. Some cut more accurately than others it seems. 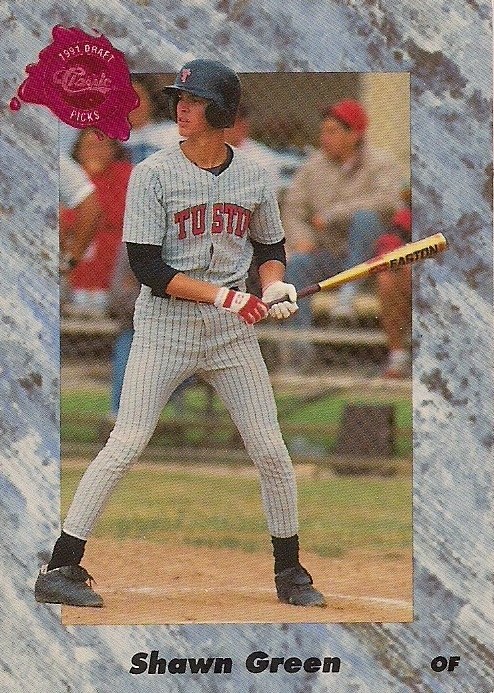 This is pretty great, too. Look, Shawn Green was just a little tadpole once.

This isn't a Dodger card, but I won't turn down a card of Green playing in a high school game.

T.J. must be reading my blog pretty thoroughly because he also sent these: 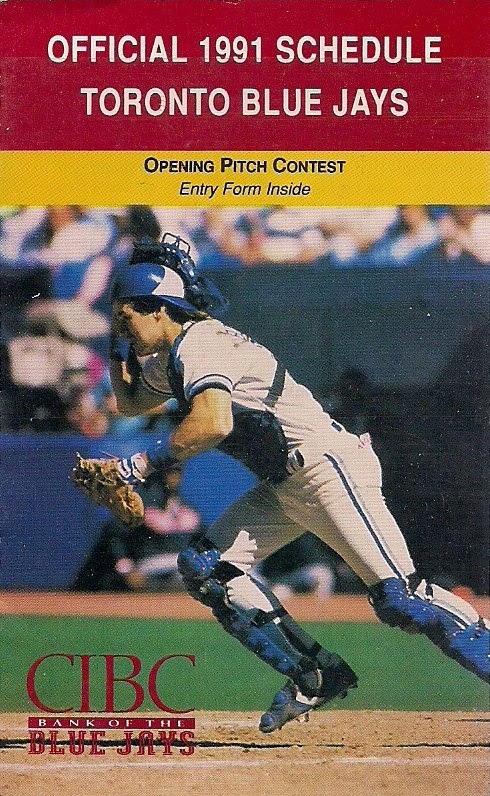 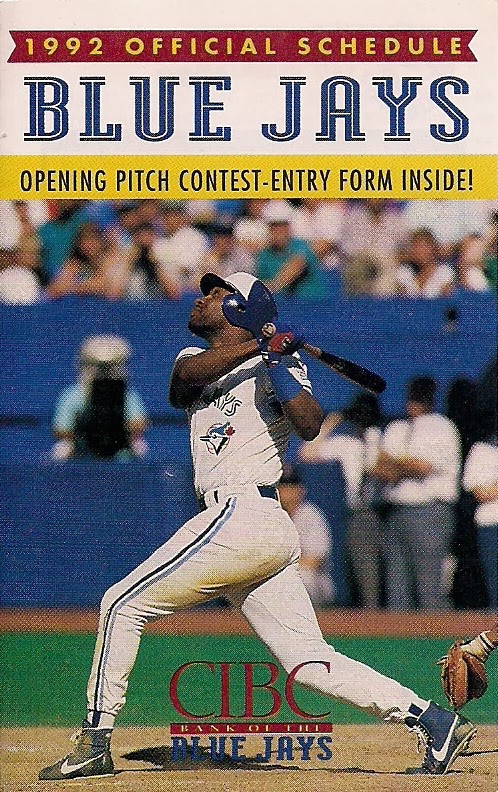 I believe I've said once before that if cards didn't exist, I would collect pocket schedules. 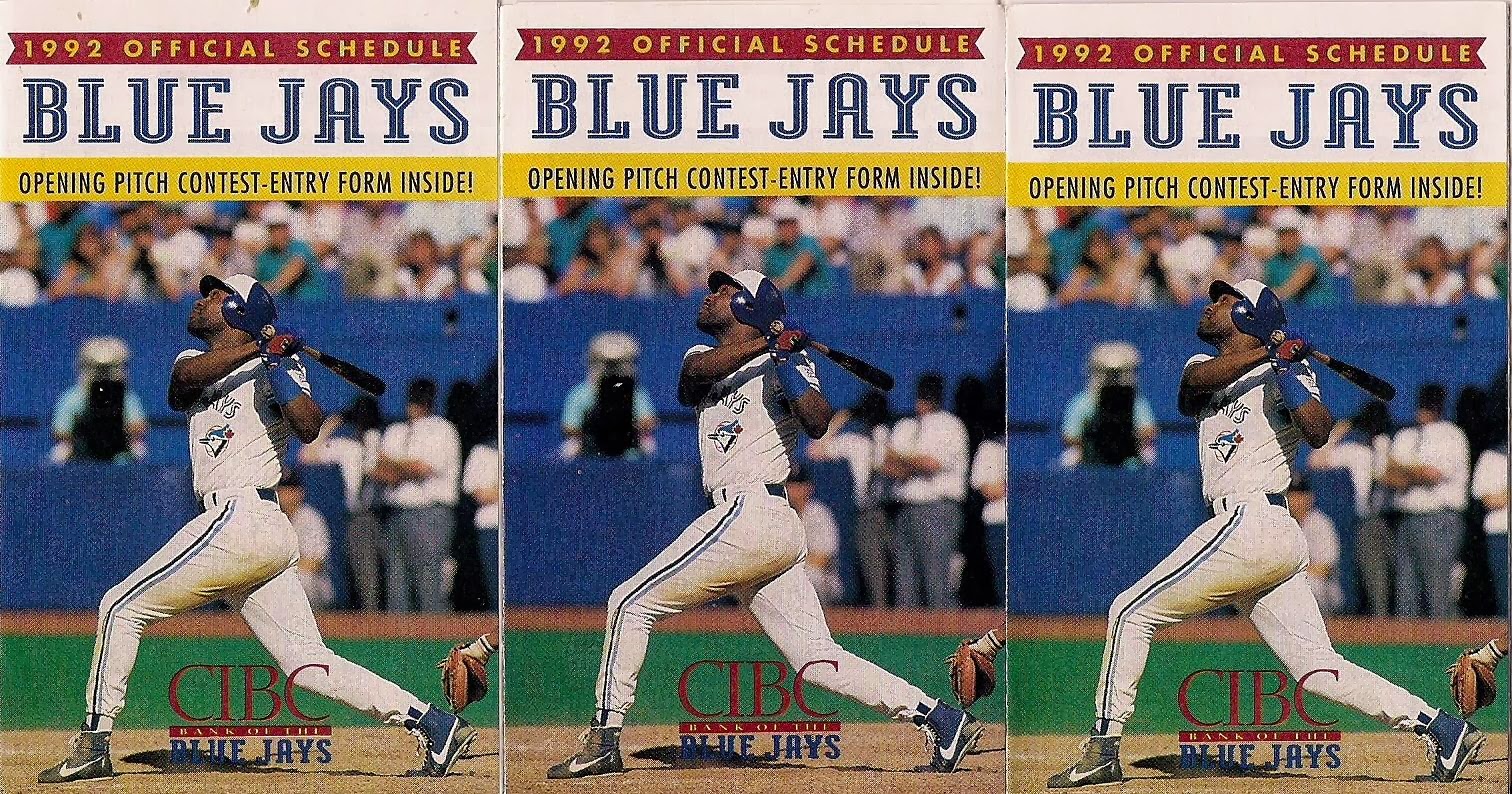 Those are three more that came out of the package. I think this might be the first recorded case of being bipped by pocket schedules.

If anyone is interested in one of them, let me know. Don't all you Braves fans jump at once.

As usual, I can't wait to add the new ones to the STACK ON MY DESK.

Because that's what I'm still doing in lieu of having properly fitted pages.

But it's only a matter of time.