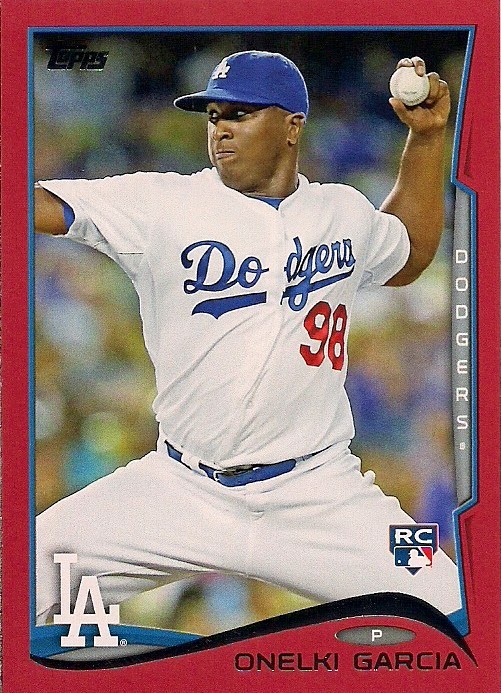 I completed the base set of Series 1 Dodgers for 2014 Topps with the arrival of a couple of packages from Cards on Cards and Starting Nine. (Actually, I think I might be missing a Kershaw league leaders card, but league leaders cards aren't even cards at this point).

With the group from Cards On Cards was this red-bordered Garcia, who is serving as the "we must select someone from each team and plaster a rookie card logo on them" player for the Dodgers this year.

It's also a night card. I know that only because Garcia appeared in three games for the Dodgers all season, and each of them was a night game.

That made me wonder how many of the Dodger cards this year are night cards.

Here are all of the cards (minus one Kershaw league leader): 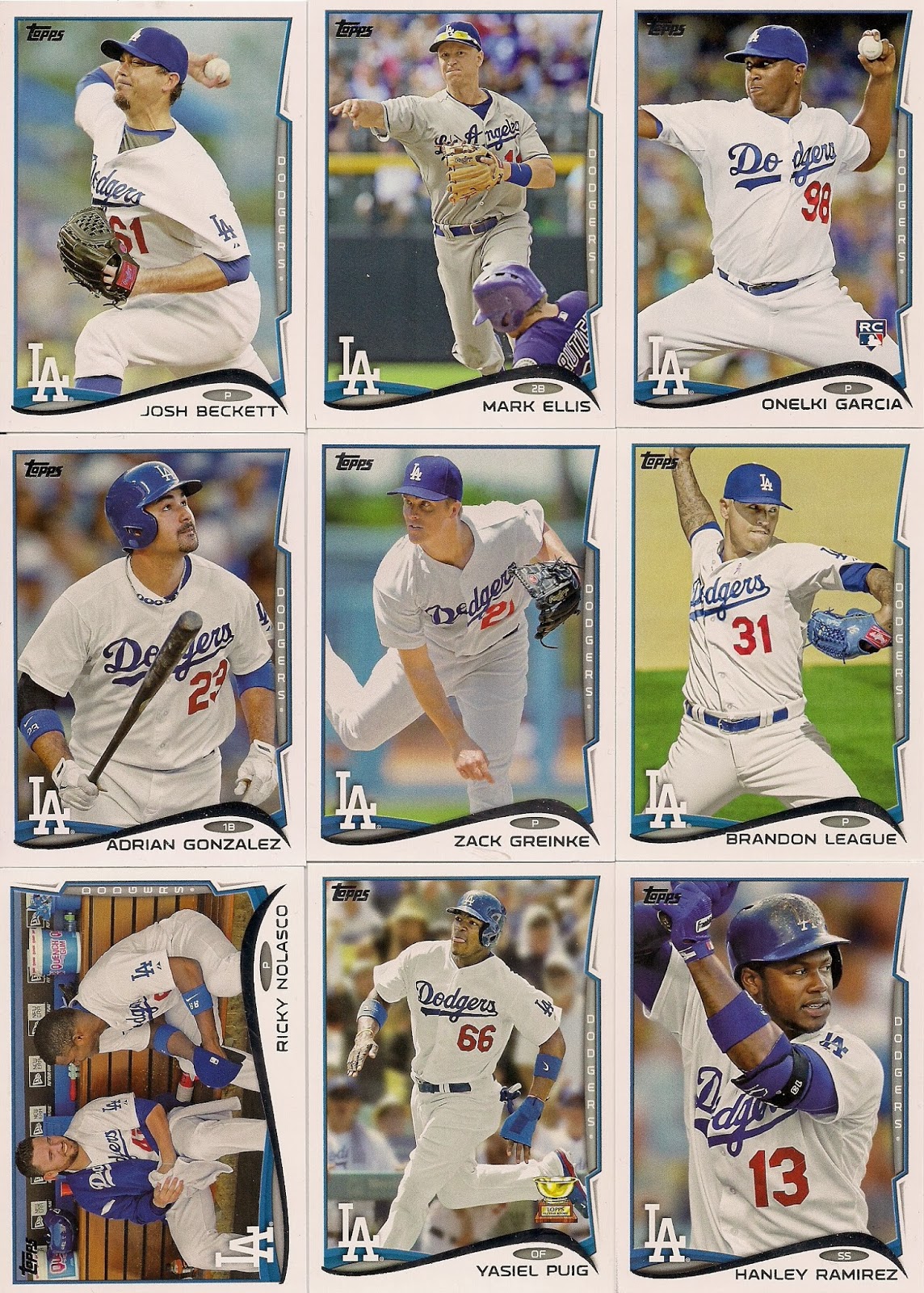 Out of that group I am thinking that four or five are night cards with the possibility of a sixth one.

It's very difficult to determine for sure, unless you know the exact dates of when the player played as I do with the Garcia card. 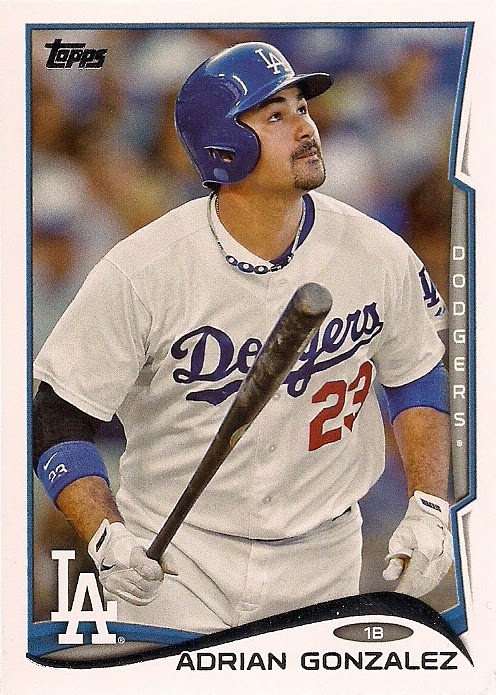 That's because most of the cards are cropped so tightly this year (and have been for the last few years). With no scene-setting, it's difficult to find tell-tale signs.

My guess is the Gonzalez card is a night card just because there is a lot of light bouncing off his helmet, which is probably from overhead lights. But I would never proclaim this as a definite night card and put it in the night card binder. 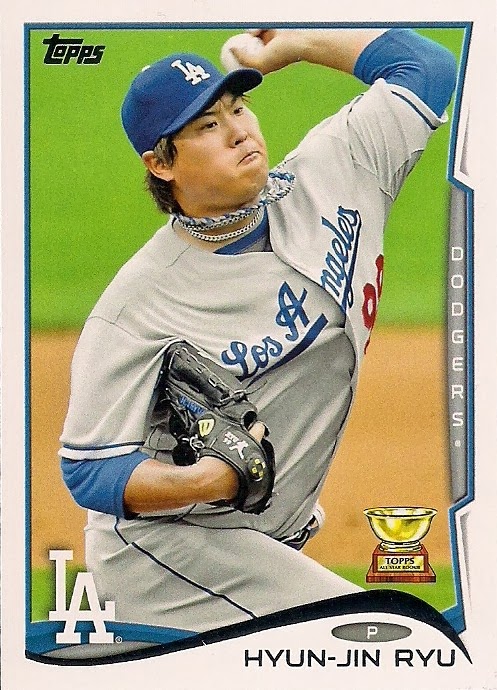 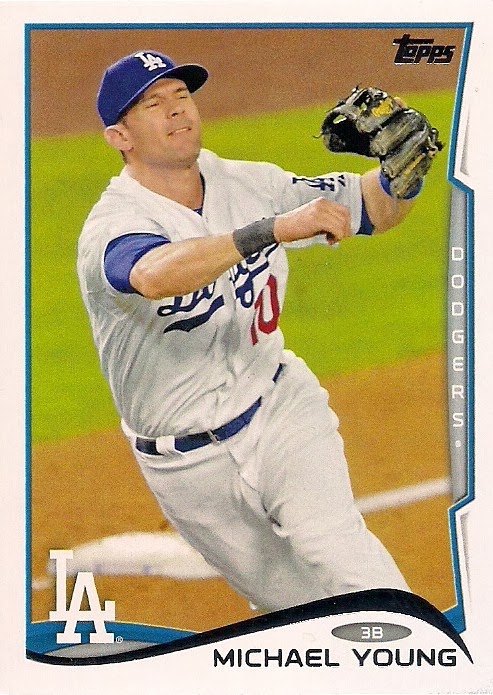 I'm pretty confident that both of these are night cards because of the glowing background in each. You get that only with night cards. I probably could pinpoint it even more as Young played only 21 games for the Dodgers, but I'm not getting into that. I don't need Young in the night card binder that badly. 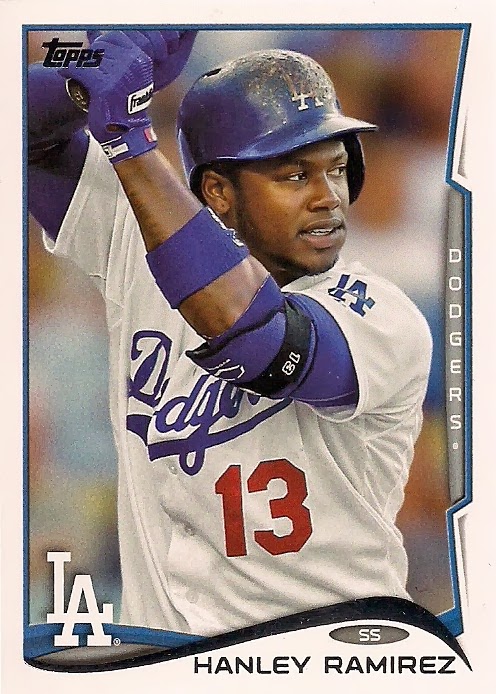 Ramirez could be a night card, but with the gunked-up helmet, who really knows? I'm leaning toward it not being a night card. 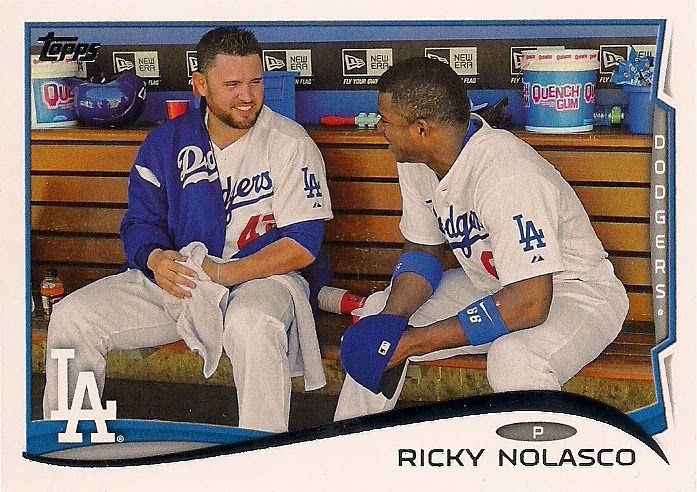 This is a possibility, I suppose. But the dugout setting doesn't reveal whether it's a day game or a night game, just that there is something called "Quench Gum" and that Topps is hell-bent on getting Yasiel Puig in as many cards as possible.

So I'm saying that Garcia, Ryu and Young are sure night card bets and the others are up in the air because of Topps' happy cropping hand this year.

But never mind all that. The important thing is the Dodgers base set is complete.

Now on to Crawford, Kershaw, Kemp, Ethier and however Topps is going to fiddle with A.J. Ellis' card this year.

Night Card Binder candidate: Onelki Garcia, 2014 Topps, #197, red border
Does it make the binder?: The red border doesn't, but as soon as I get a dupe of the base card, that will go in.

JediJeff said…
Gonzo is a night card for sure. That is definitely a light bank reflection in the helmet. I am saying no on the Nolasco. Look at the helmet over his right shoulder. The reflection looks like a mighty bright blue sky. Dusk at best, but I don't think it's that late in the day.
February 23, 2014 at 8:27 PM

Wrigley Wax said…
The Gonzalez card is from July 27......a night game against the Reds. All the original pictures are at Getty Images. Here's the link for the Gonzalez card.....http://www.gettyimages.com/detail/news-photo/adrian-gonzalez-of-the-los-angeles-dodgers-bats-against-the-news-photo/175891715
February 23, 2014 at 10:51 PM

night owl said…
I pretty much ignore dusk cards, except really cool ones, of which there are a few. Perhaps a back page of the binder for those.
February 23, 2014 at 11:05 PM