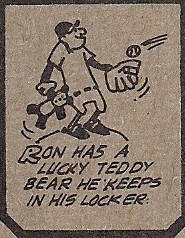 I enjoy looking at baseball card cartoons almost as much as anything else having to do with this hobby. That's why I can't for the life of me understand why cartoons don't show up on the back of baseball cards every stinking year. And don't come at me with Heritage. We all know they recycle the same 12 cartoon images each year.

As I've said many times, I learned a whole lot looking at the cartoons on the back of my cards while growing up in the '70s. I often wonder if kids who grew up with cards in the '80s learned as much because, wow, that was a decade barren of cartoon images.

One of the sets where you could learn the most was the 1976 Topps set. The cartoons may not have been as interesting in '76 as they were in 1974 or 1977, but they were packed with archaic facts. For example:

I knew this factoid before I even knew who Wes Parker, Jim Lefebvre, Maury Wills and Junior Gilliam were. And I have the 1976 set to thank.

That's a valuable piece of information right there. Impress your friends. Baffle your enemies.

This one takes a long time to get through, but I bet you didn't know it. And, look, all the grandsons have baseball cards of their grandfathers.


1976 Topps wasn't the only set that included almost forgotten facts. 1972 Topps was good for that, too, just in a lot tinier type.

That's a fascinating bit of information and I'm filled with all kinds of questions after reading this. Why were they playing a game during a flood? How was Ted Menze able to run in rubber boots? If I had time to research maybe I'd have an answer to these very serious questions.

While sets like '72 and '76 contain baseball historical facts in their cartoons, other sets stick to more present day players. The 1980 Topps set does that a lot. Probably the 1974 set does that the best, because not only are the cartoons referring to the player featured on the front of the card, but a lot of them give some key tidbit about their personal life.

I've written about this before. The second jobs they had. Their hobbies. The teddy bear they kept in their locker room (can you believe it?) And this ... 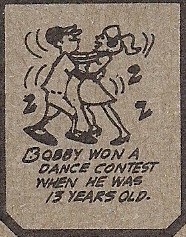 I am totally not surprised that this is Bobby Valentine.

The 1980 set mentions a lot of player exploits in its cartoons. So there are a lot of trophies and pictures of a player looking at his accomplishment in the newspaper. Those get a little boring.

Another feature of the 1980 cartoons are family relationships. Such-and-such player has a brother or father who played in the major leagues.

And there is one thing I noticed with these families: 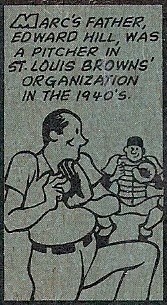 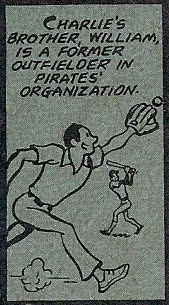 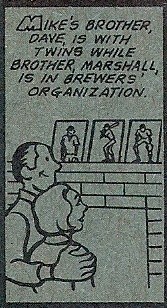 There is a lot of male-pattern baldness going on.

My favorite cartoons come from two specific sets -- 1956 Topps and 1977 Topps. If I had more 1973 Topps, I'd probably lump those in, too, but that'll have to wait for the day when I beef up that collection.

The 1977 Topps is great for the illustrations and the personal insight. Such as this: 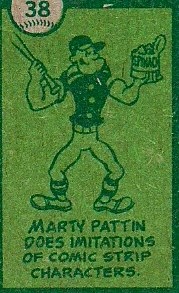 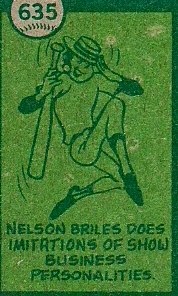 Players have a lot of free time on their hands.

But the 1956 Topps set conquers all in everything. 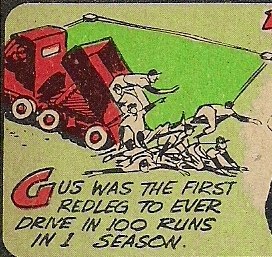 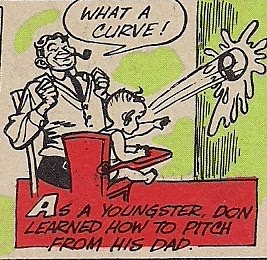 But this is even better.

There are hundreds of examples of 1956 cartoon greatness. Included in that is how many ways the cartoonist(s) illustrated how far a player can hit a ball. There was no repetition or recycling in these cartoons. Oh, no.

You hit a ball far and you either hit it into the next day ... 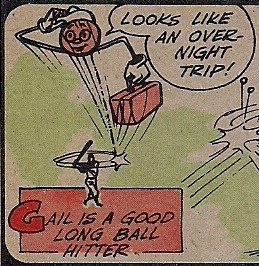 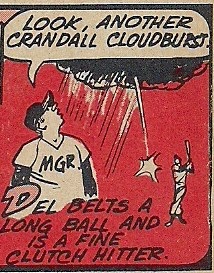 .
.. or knocked it into the solar system. 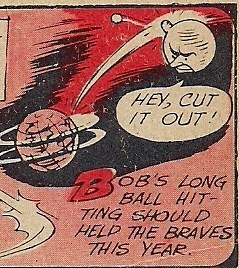 Baseball card cartoons are great because they are artistic, creative and informative. And they really need to be brought back ... permanently ... and in the base set.

Until next time, I'll leave you with this: 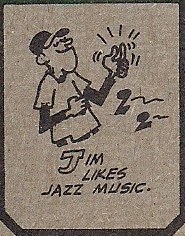 NPB Card Guy said…
My all time favorite cartoon was on JC Martin's 1973 Topps card. Martin had set a record in the mid-60's for most past balls in a season (he was regularly catching a couple different knuckleballers with the White Sox) and Topps for some reason couldn't think of anything else to highlight about him (IIRC they also mentioned the fact on the back of his 1971 card). The cartoon showed Martin holding up his glove which had a big hole in the middle of it.
February 27, 2014 at 8:05 AM

Bo said…
In the book "Ball Four" Jim Bouton mentioned that Marty Pattin did an x-rated Donald Duck impression.
February 27, 2014 at 11:58 AM