The unwelcome return of the future star(s) 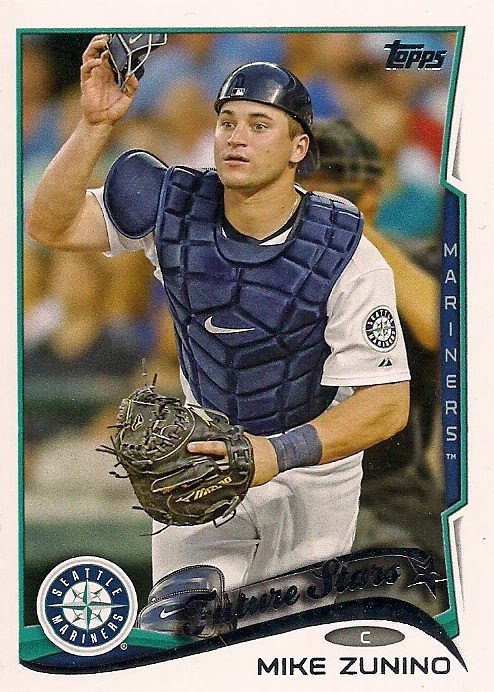 So, the "Future Stars" subset is back. Everyone knew it was coming back because when Topps released its prototype of the 2014 design back in August, it plastered "Future Stars" script on its Yasiel Puig mock-up card.

Topps is obviously rather proud that the "Future Stars" are back. It's a nod to collecting from the 1980s when Topps first featured the phrase on its cards. Those who first collected back then probably got all gushy when learning that it would reappear.

Me? Well, other than indicting "Future Stars" for the ruination of the card collecting hobby, I didn't give it much thought.

Let's look at the beginning of the "Future Stars" tradition. And no, I'm not starting with 1987 Topps. 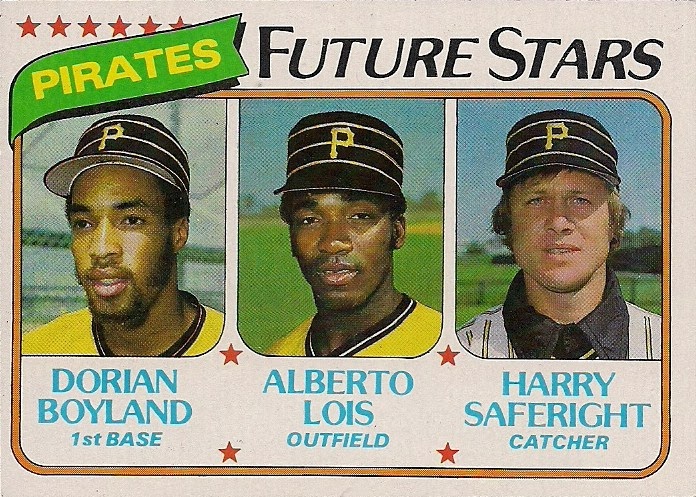 "Future Stars" first arrived in 1980 with Topps' traditional rookies subset. In previous subsets, Topps labeled the new players "rookie stars" or "rookie prospects." But in 1980, by gosh, Topps was going to come right out and say it. "These guys are FUTURE STARS."

Dorian Boyland, Alberto Lois and Harry Saferight wouldn't be the last time Topps got it wrong.

I can't remember what I thought when I first saw this phrase. My guess is I gave it a confused head-tilt and then moved on to, you know, cards of real baseball players.

But seven years later, Topps made sure that I wouldn't be able to ignore these nobodies no more. 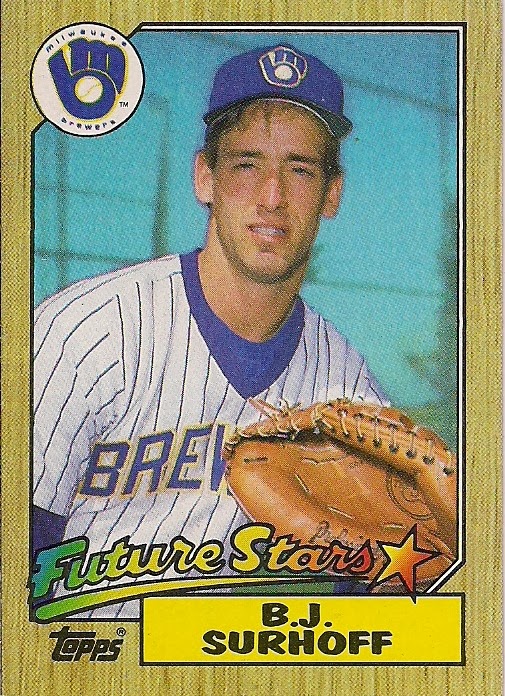 The "Future Stars" got their own card.

I know that little collectors in 1987 were probably jumping up and down with glee. But I was staring at the card thinking, "B.J.? Is this a real guy? Is this a real name?" Then I'd turn over the card, see absolutely no major league stats and snort in disgust. "Why is this guy getting his own card?"

I'm not sure how Topps selected the players to brand as "Future Stars," but there were only a handful in each set, thank goodness. As you can see, Topps went with a rainbow script theme, and added a star at the end, in case you weren't aware that Mr. Surhoff here, with no MLB at-bats, was a STAR.

But times were changing -- Topps, after all, probably stole this gimmick from Donruss, whose Rated Rookie stamp had been going for four years by that point -- and all it took was one of the "Future Stars" in the 1987 set to be Bo Jackson. There was no stopping the Future Stars concept. 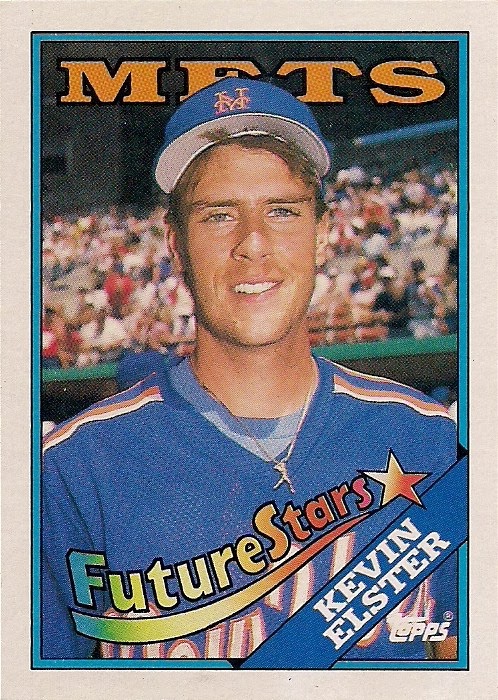 In 1988, the very first "regular card" in the Topps set was a "future star." Had I been collecting in any sort of regular fashion in '88, that likely would have set me into a silent rant. Who is this man soiling card No. 8? He has 40 career at-bats!

But I was swimming upstream. Collectors obviously liked the subset and so did Topps. It altered the font a little bit and curled the letters up from left to right to avoid the name flag. But the rainbow pattern was still there. And so was that blasted star. 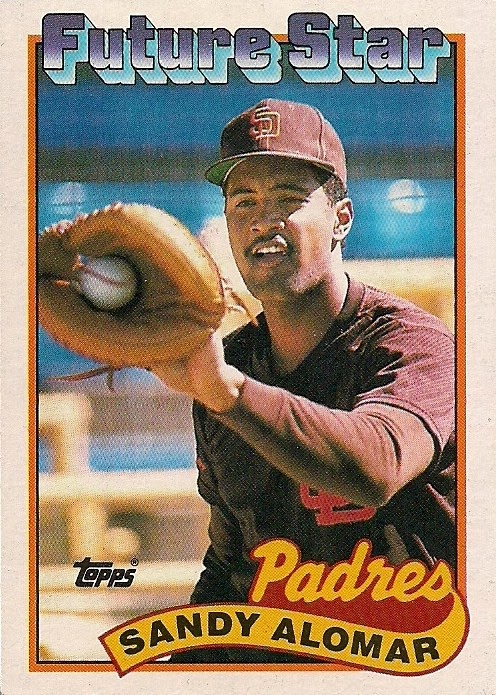 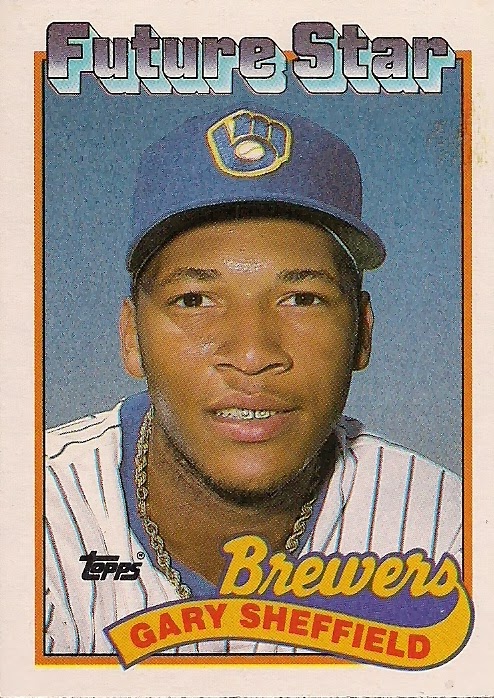 And, of course, Gary Sheffield.

The rainbow script was gone. The star was gone. The logo was now "futuristic" with metallic block letters. And Topps shoved the title to the top, so you couldn't possibly miss it.

Best of all, for me, it was finally grammatically correct. There was only one player on the card, so of course, he wasn't a "Future Stars." That made no sense. He was a "Future Star."

At least I could get behind that. It made pulling 47 Mike Harkey cards that year somewhat bearable. 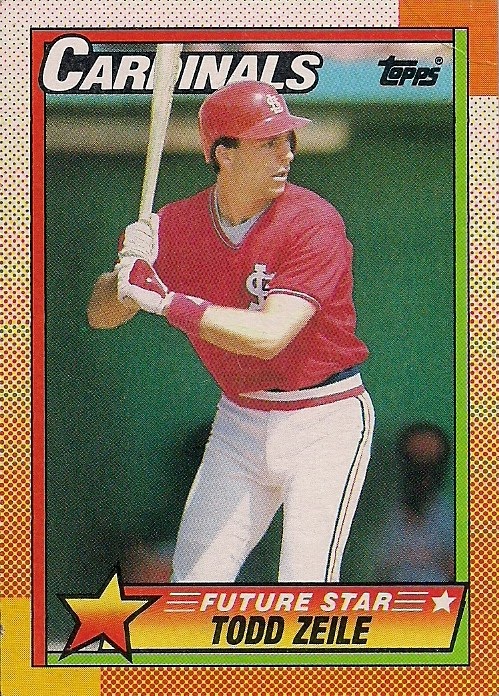 After 1989's performance, it appeared as if "Future Star" would follow the rookie cup as a tradition that lasted forever. The grammatically correct "Future Star" was back again in 1990.

The logo design for this one amuses me the most. I hope the third graders who came up with this were paid well. 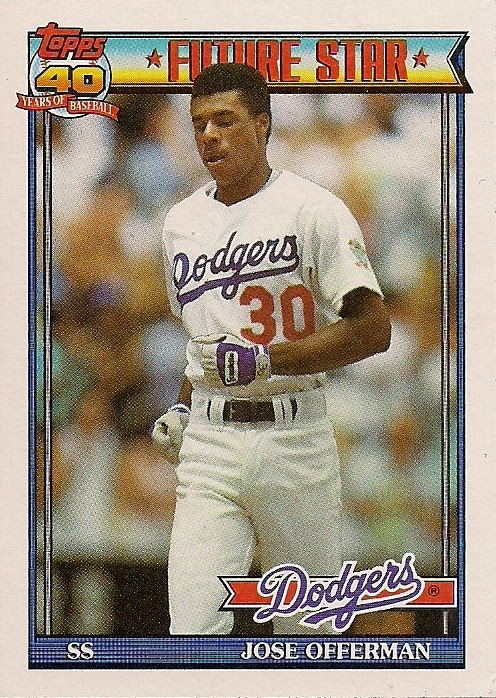 In 1991, the Future Star returned for a fifth consecutive year, but it would be a bad one for Topps. 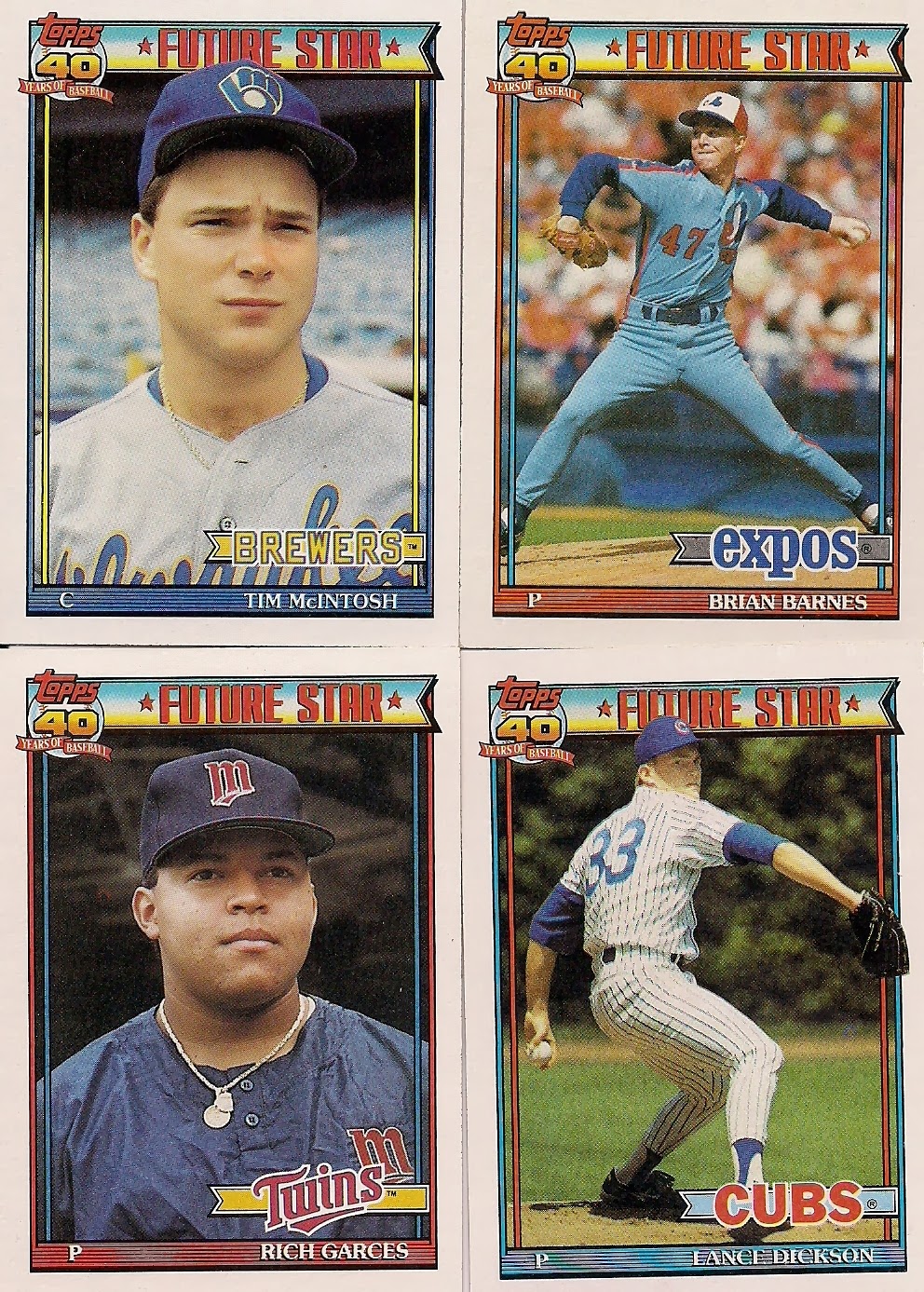 Topps' prognosticating powers were terrible that year. Very few of the '91 Future Stars" did anything memorable in their careers, unless you count Offerman assaulting various parties on the baseball diamond.

Perhaps shamed by this disaster, Topps put the "Future Star" into storage for a couple of years. 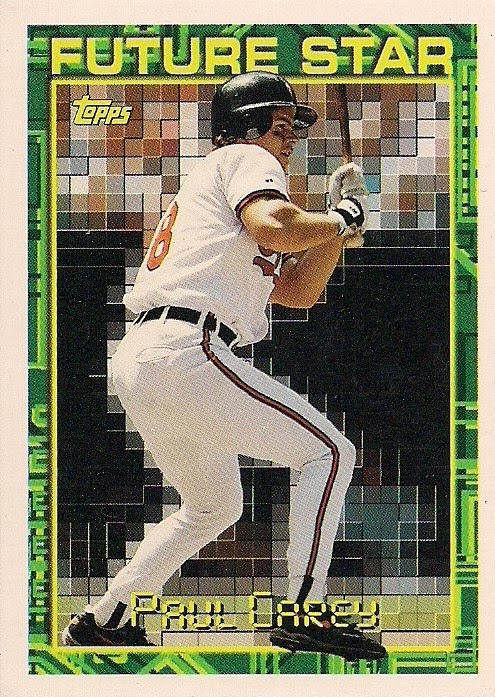 It reappeared in 1994 in a made-over form. It was still a subset, but the Future Star cards looked nothing like the base cards in the set. 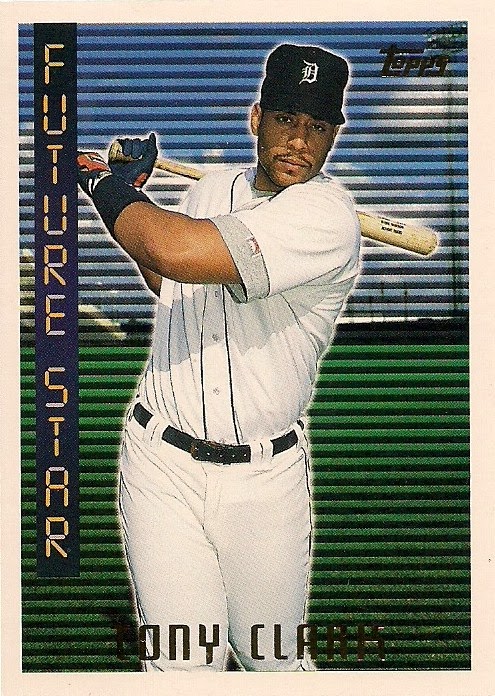 Topps repeated that format in 1995 with a window-blind look that I think is very appropriate for this subset. 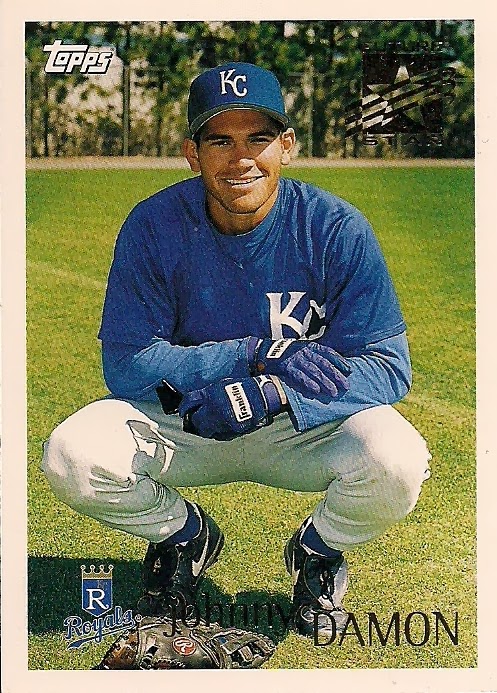 Then in 1996, the Future Star made what I believe is its last previous appearance. The cards looked slightly different from the base cards in the '96 set, but on a whole it was more in line with what Topps did from 1987-91.

And this time, the Future Stars logo was in foil. I know you can barely see it, but trust me it's there.

The Future Stars in this set were fairly heavy hitters. Johnny Damon, Derek Jeter, Karim Garcia. I'm not familiar enough with late '90s sets to know if the Future Star showed up again after 1996, but perhaps by then, Bowman was doing Topps' "Future Stars" dirty work and the FS designation wasn't needed anymore.

Since that time, Bowman has become an entire card-line dedicated to the Future Star. In a lot of ways, the "future star" is what drives the hobby as collectors lose their minds every June over who has the "hot card" this year. I've even heard that the only people who make money in the hobby are people who deal in the elusive "future star."

And so we place our money and our time toward someone who may or may not be good for a long time. Nobody knows. Because no one can see the future with anything close to 100 percent accuracy. We're throwing down good cash on a dream.

This is all a product of the rookie craze of the 1980s. It pulled people away from how I collect. While it's great that other collectors found their niche, I can't say that I'm fond of the "future star" or the "No. 1 draft pick" or any of its ilk. 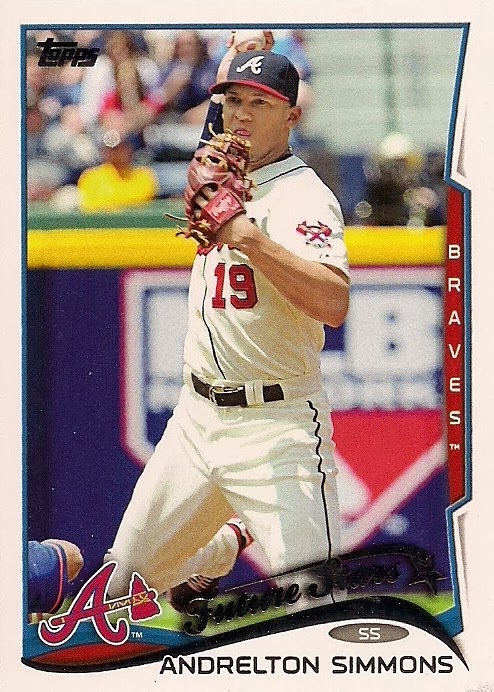 When the "Future Stars" subset returned this year to Topps I thought three things:

1. "Future Starsssssss"? What happened to the grammatically correct "Future Star"? You were doing so well there.
2. My experience with "Future Stars" are players with barely a sweat in the majors. Andrelton Simmons played 157 games for the Braves last year. Is this a change in philosophy?
3. Foil again. Bah, that is so 1996.

But above all, I thought, I guess you just can't kill the "Future Star."

madding said…
I noticed Starling Marte has the Future Stars logo and lost rookie eligibility after 2012. Weird.
February 4, 2014 at 8:25 PM

Jason T. Carter said…
I'm not happy that the "Future Stars" are not limited to rookies. Technically, sure, they could still be future stars even though they are veterans...but it just doesn't sit right with me.

Play at the Plate said…
Maybe they should come up with a "Past Stars" lineup featuring guys that should have retired but are hanging on for dear life. Derek Jeter, Albert Pujols...those guys would work in that subset.
February 5, 2014 at 12:35 AM

mr haverkamp said…
Kevin Elster was certainly a star 12 years after his future stars cardboard appearance, hitting 3 HRs on opening day at San Francisco's brand new 'phone company stadium' and sending 40,000 Giants fans home that afternoon incredibly disappointed. I'm sure Night Owl remembers he was a Dodger at the time!
February 5, 2014 at 1:12 AM

SpastikMooss said…
I loved this in 1989...it's part of why I thought the Gary Sheffield RC was so great. For a while that was the card I wanted to pull in every "vintage" pack...granted this was around 1997 when he was raking with the World Champion Marlins...

Hated it in 1995...always loved that set but the Future Stars looked quite silly.

Doc said…
I'd venture to say that "Future Stars" is in reference to the subset name, not the particular player on the card. Case in point, Topps 2013 insert set "The Greats." Each card says "The Greats", but only one "Great" is pictured per card.

Roy-Z said…
Topps simply doesn't think, or care, about any of their decisions anymore. They just do. MLB gave them the keys and they're wrapping the Toyota Carolla around a tree.
February 5, 2014 at 1:53 PM

chris said…
I'm with Jason. The best part of the Future Stars was Topps wildly guessing which players (Tim Pyznarski!) would become stars and failing miserably, never having another card again. If they pick well-regarded players who have already had their RCs and made it to the big leagues, there's no opportunity for schadenfreude.
February 5, 2014 at 10:26 PM

Fuji said…
Back in the late 80's... I remember ripping through packs and putting aside all of the Future Stars I could get my hands on. It sort of lost its luster after a few years, but I'm open to see how things go this year.
February 8, 2014 at 10:49 AM