The opposite of a hobby box

February 28, 2014
(WARNING: This post will contain commentary about kitchen countertops, doughnuts and rock ballads from the '80s ... and the post writer will try to connect all three. Those with weak constitutions may want to click off now). 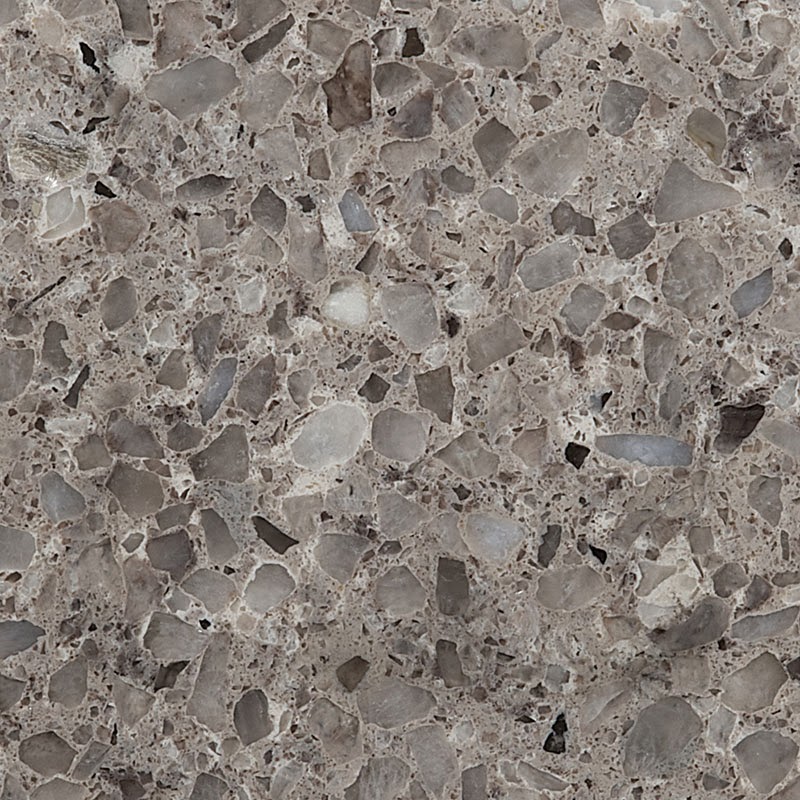 I was half paying attention to some 2014 Panini Donruss breaks yesterday on Twitter. Sure, I know some of you weren't even aware that there was a Panini Donruss set. But, trust me, the collectors who must have the latest and greatest NOW were aware.

I may be wrong in my perception -- because like I said, I was half paying attention -- but it didn't seem like the Donruss breakers were all that satisfied once all the wrappers were open. There were collation issues. And short-print issues. Lots of short-print issues (I have no idea why Panini baseball -- a company that can't even get half the collectors to give it the time of day -- is short-printing things).

It made me sad for just a brief moment for the box breakers. And I began to remember all the issues that come up when you invest your hard-earned money into a hobby box. There are not only collation issues and artificial scarcity issues, but also the plain dissatisfaction of pulling cards you don't necessarily want. I'm sure you know what I mean. I can't be the only one who has finished off a box and then felt ... hollow.

Then my mind veered in a different direction. I was out looking at countertops for the kitchen the other day. As I walked past cabinet after cabinet, my mind glazed over, kind of like it does when I stare at HGTV for more than 2 minutes. But then I noticed something on a display wall. It was columns and columns of countertops samples. In all kinds of colors, shades and consistencies. Probably like 70 or 80 different samples.

I wanted to collect them all. Right there. Grab a sample of each. Then leave the place and come back a couple weeks later and see if there were new ones. And then collect them.

Good gosh, I have a problem.

And then I started wondering about other consumer goods that come in different varieties. And what if those consumer goods were as horribly presented as hobby boxes seem to be these days?

You think card collectors freak out because they received three Ben Zobrist cards in the same box? Try messing with a doughnut order in a similar fashion. 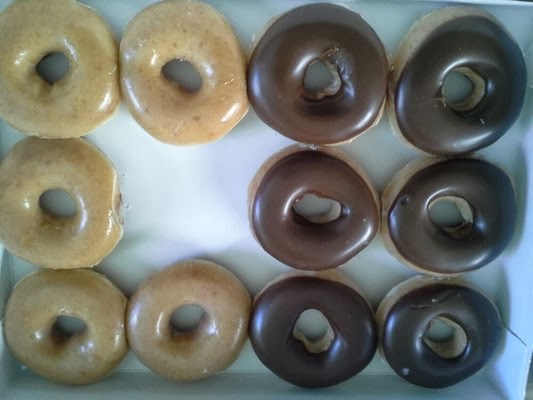 Perhaps instead of being shorted a pack in your hobby box, you were shorted a doughnut in your doughnut hobby box.

You think anybody's going to stand for that?

Hobby boxes are messed up. And especially if Panini -- who doesn't have 50-plus years of experience behind it, not that it makes it right when Topps does it -- is screwing them up. That ain't good.

I honestly don't know if I'll buy a hobby box again. It doesn't seem to be worth the gamble. And when I think of how furious I'd be if other things I bought were offered like the cards I bought, it makes me not want to buy a hobby box on principle.

So I wanted to point out the opposite of a hobby box.

If a hobby box involves receiving lots of cards for a wad of money but doesn't satisfy because you pull a bunch of cards you don't want, what is the opposite of that?

I guess the opposite is getting a single card, for a minimal amount of money, that you definitely do want. 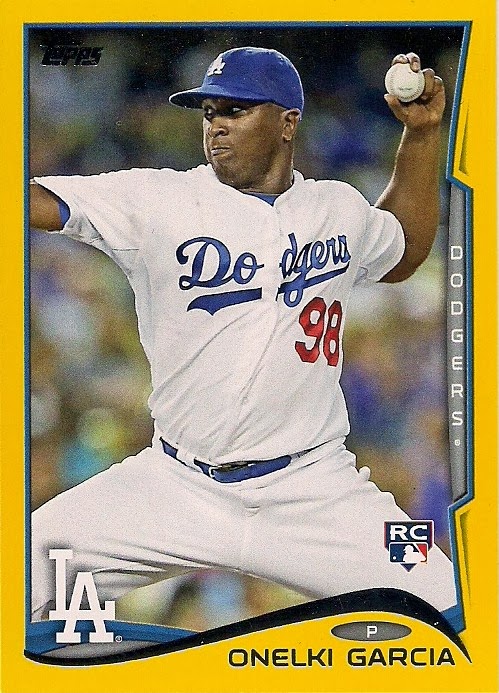 One card. Mailed to me. From Marcus at All The Way To The Backstop. And it's something I want.

That is efficiency and productivity that a hobby box can't match. 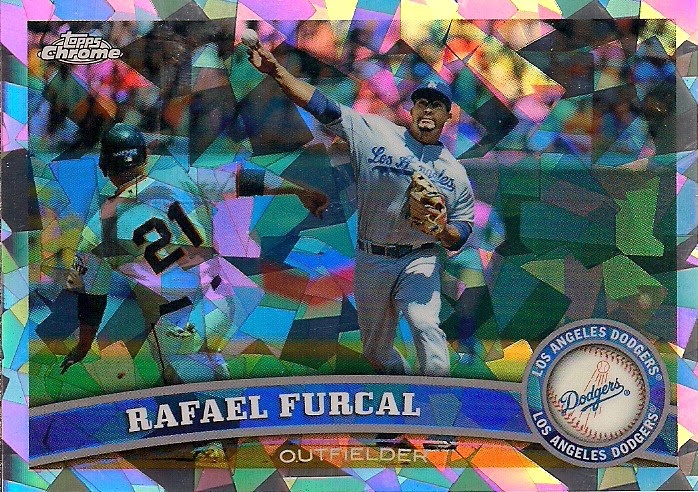 One card. Mailed to me. From James. He's active on Twitter. He's also on the blog Unabashed Interest, and he definitely sent a card I want. Love that atomic action.

My chances of landing an atomic Dodger in a hobby box of Chrome is almost non-existent. 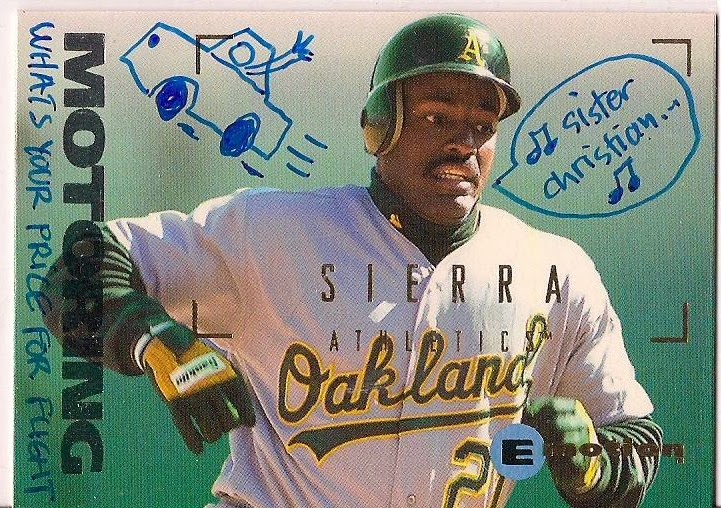 One card. Mailed to me. From Tom of The Angels In Order.

I wanted this card because Tom did a riff on Night Ranger's Sister Christian when he displayed this card on his Skybox E-motion blog. I thought it was so appropriate -- the perfect harmony of an odd song and an odd set.

And, look, he even wrote an homage to Sister Christian on the penny sleeve ... 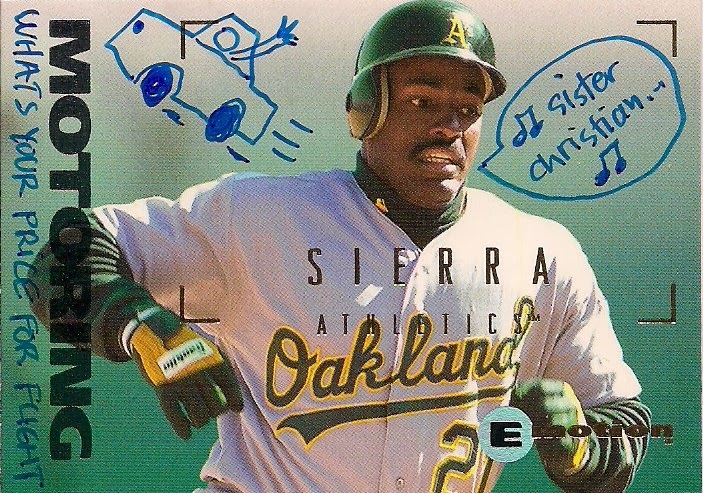 Those doodles are written right on the card, baby. And that is something that you can't find in a hobby box.

I still say the most enjoyable way of working one's way through this hobby is not through a hobby box and the flurry of packs and barely looked at cardboard, but taking a more methodical pace. Enjoying the sights and the journey, bit by bit.

One card at a time.

Stubby said…
I dunno. I like hobby boxes. They're a far sight better than blaster boxes, that's for sure. For example, I bought a couple of packs of Strata FB at the LCS just to see what they were. They were OK. Since nothing else was going on at the time, I picked up a blaster the next time I was at Target. Imagine my horror to learn that the cards were not of the same thickness. The retail were paper thin. The hobby were thick--they had substance. But I digress.

I've never really complained about collation in hobby boxes. Its far better than it used to be. And I'm only minor league bummed if the hits don't equal what's promised. Most of the hits suck anyway. Who needs a carpet sample linked to, say, Mike Aviles? So I should be upset that I didn't get a carpet sample linked to Mike Aviles? Let's face it, you can break cases and not get, say, a Willie Mays autograph. Oh, they're out there--supposedly--and somebody's getting them, but I never expect it to be me.

I'll tell you what DOES upset me, though. I bought a Heritage High Numbers set from Topps.com this past year. Way overpriced and only two Mets anyway, but I like Heritage. Well, the autographed card (Mike Olt?) was dinged. Worse than dinged actually. Looked like somebody's kid had started teething on the corner. The rest of the cards were fine. Upset yet? No, still fine. I contacted customer service with the issue. I never got an answer, but I did get an email asking me if I was satisfied with the response I didn't get. Of course I said "No, because I never got a response." Next time I looked up the complaint online, it was listed as "resolved". Now THAT p$#@es me off.
February 28, 2014 at 8:56 PM

RAZ said…
I tend to agree. Hobby boxes and packs in general feel much more like playing the lottery than anything else. You get a card you really wanted or a card you can sell/trade for a decent profit just often enough to keep you coming back, but for every winner there are many forgettable packs and boxes whose cards wind up in the 5000-count boxes with all the other forgotten cardboard. Unless you have enough cash to bust cases and cases and increase the odds of pulling the big cards of your favorite players and teams, you are probably better off just buying or trading for the cards you want from the secondary market. Of course, those little foil packets have that draw to them that keeps me from always doing the logical thing and I buy my share of the things.
March 1, 2014 at 12:15 AM

Fuji said…
Man... right about now I'd love to get jelly doughnut bipped. I could probably kill three or four of these bad boys in one sitting.
March 1, 2014 at 12:36 PM