February 12, 2014
(Help! I've been kidnapped by the Olympics! And college basketball! And local high school playoffs! And Derek Jeter announcing he's retiring! I hope to have thoughtful blog posts when this is all over! ... In April! Time again for Cardboard Appreciation -- didn't I just do this? -- this is the 199th in a series): 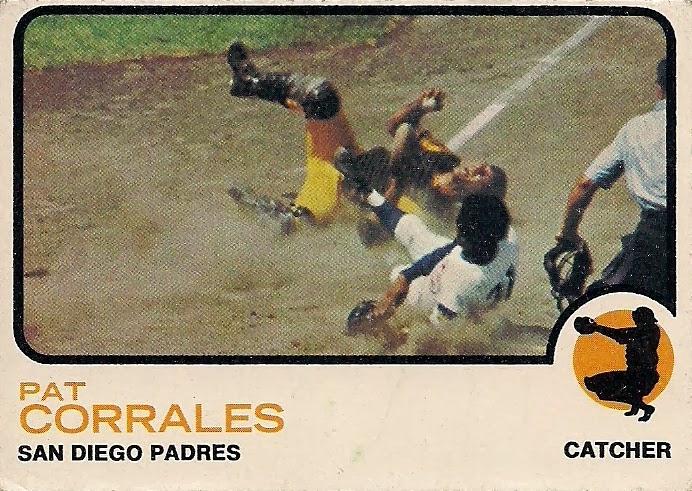 I haven't made a lot of headway on compiling a list of the 100 greatest cards from the 1970s. It's a bad time of year for time-consuming projects and we all know how much time research consumes.

But I've made progress in one area of the countdown. I have at least landed one card that I know will be on that list. It's the 1973 Pat Corrales card you see here. Mark H. sent it to me, and I think I'll finally get out from underneath a bunch of stuff long enough to send some Red Sox his way this week.

Plenty has been written about this card and it's been determined several times that the man who bowled over Corrales is none other than pitcher Fergie Jenkins.

I won't repeat what's been said about the card a number of times already, and I'll save some of what I think makes this card great for when I do the countdown.

I just want to say that several years from now, when we're all sick of runners tiptoeing into home plate and wondering what became of the game that we love -- a game that is both artistic and physical -- this card is going to come up over and over again as a "when men were men" example.

But consider this post my early version of that.

Because I'm really gonna miss this.

Play at the Plate said…
One of the most violent play at the plate cards and I love it. I don't want people to get hurt, but I don't want to see the patp go away. Thanks for the link by the way.
February 13, 2014 at 2:16 AM

Trapper9 said…
Thanks. great link. Had replay been around then I think Fergie would have been safe.
September 3, 2017 at 8:15 PM