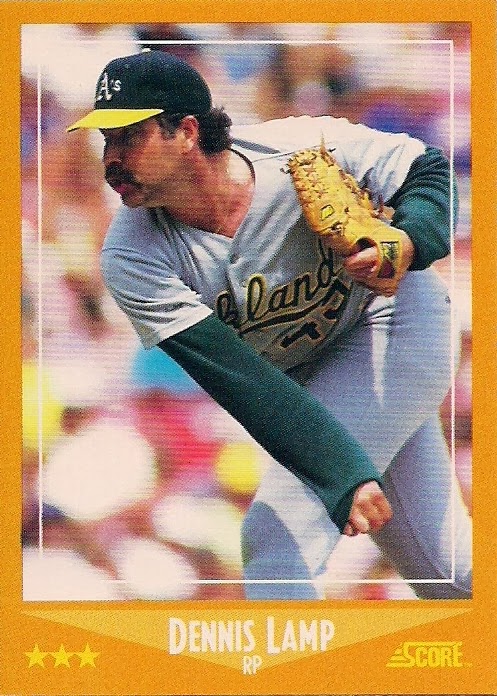 I'm not sure how this is going to go. Do collectors treat Score with the same reverence and devotion as Topps, Upper Deck and even Fleer?

I guess I'll find out.

Score does have one thing going for it. For an 11-year period, Score was the card set of the people. Kids could buy a rack pack with their allowance money. Even college students like me at the time -- who spent most of their money on textbooks they would never use again -- could throw some change at Score. It was cheap, it was plentiful, it was pleasing.

Score was simple, often colorful, and included most of your favorite players. The backs were wordy, but packed with information. Best of all, you could land a bunch of cards in a single purchase. This wasn't Upper Deck or Pinnacle. Score never got the memo that cards were suddenly an investment. And thank goodness it didn't.

However, there is a certain sameness to Score sets from year to year. In terms of appreciation for individual sets, is there really one Score set that stands out above the others?

There is for me. It's Score's debut from 1988. It's colorful. It has a simple, geometric design. It contains the Reggie Jackson subset. I won't go as far to say that it's the only Score set that matters, but it did set the standard. And it is the only one I have completed or have in a binder.

As for the others, I have modest appreciation for 1993 Score. I think it's very team-centric and I appreciate that. The 1994 set marks Score's entrance into "glossy," which ain't good, but I've always enjoyed the midnight blue borders. And, 1989 Score, while not exceptional, makes me go to a warm, fuzzy place as I recall heading to the strip mall plaza after class and scooping up a rack pack or two.

My least favorite Score sets? I've never been fond of 1992. The orange and purple and green makes me want to get rid of everything from that set. And the backs to 1997 Score are downright intimidating.

But this is an exercise for you. I'm asking you to select the biggest year-to-year improvement and year-to-year bust in Score's brief history. Where did Score suddenly go wrong, or right? If you're like me, it'd all revolve around '92. Biggest bust: 1991-92. Biggest improvement: 1992-93. But again, you're not me, and this is a collective expedition.

Please list in the comments what you think is Score's biggest improvement and biggest bust. And then I'll put up a poll for voting purposes in a week or so.

But first, a look at all of the Score sets:


Of course, this just makes me wish Score was back again. Opening Day and Panini certainly aren't cutting it. And although I like hockey, I'm not going to be buying hockey packs just to grab some Score again.

Anyway, let me know the biggest improvement and bust in the comments. Or you can just cry about missing Score. I'll be right there with ya.

cynicalbuddha said…
I too was hoping that Panini was going to make Donruss their baseball flagship, but with a piddly 200 card base set that ain't happening, maybe they'll bring back Score Baseball who knows. For my money the the 1990 Score set is by far the best design in the history of the Score brand. A great design, nice framing, unoffensive color scheme, then to follow that up with the vomit inducing issue that was 1991 Score? Yep there is your biggest bust in my opinion. And while I don't think that 1989 Score was terrible, the 1990 issue is still the best and the rest of the issues just start picking themselves up after 1991 and all really kinda look the same so my vote for most improved is 1989 to 1990.
February 19, 2014 at 7:29 PM

Mark Kaz said…
I don't think Score ever busted, though I have never been a fan of the seminal set nor the '90 set. The design is simple and pleasing enough, but all the colored borders are too much. Kinda hypocritical coming from someone who loves '90 Topps, I suppose, but that's where I'm at. Now, that being said, I do have a soft spot for '89 Score because it was the first non-Topps pack I ever received (good ol ' mom scored 'em from the supermarket). And I really dig all the cool photography from the later sets. I guess what I'm trying to say is: Please come back, Score!!
February 19, 2014 at 7:34 PM

hiflew said…
I absolutely love Score, but I never consider it an equal of Topps just because of the lack of longevity. Two of the sets that I spent the most time collecting as a kid were 1988 Score and 1991 Score. I think 1992 Score gets judged a little unfairly as well. The gradient bar is a little off-putting, but the photography is far more memorable than both Topps and Upper Deck in 1992. I do think you are right in that Score sets are a little too close in appearance for there to be any major improvements or busts, but I'll try.

Stubby said…
'88 Score was a beautiful set. Just beautiful. It had everything I liked about the old cards--including plenty of color--and everything I liked about the new cards--including great pictures on the back. Its clear to me that that first set was well thought out. They were trying to get a license and they gave great attention to every detail. After that, they never had another thought in their head. The design was basically the same for the next three years (I didn't like '89 at all, though I have a fondness for '91). And every set/design thereafter was garbage. I'd love to say the biggest improvement was from '87 to '88. ;^) But, OK, I'll play. Nah, I can't do it. It's impossible to ignore the ugliness of the '95 set. But was '96 an improvement? Not really. Can't do it. Biggest bust, though? Again, its hard to ignore the ugliness of the '95 set. But, yeah, I'd have to say '91-'92 was the biggest bust. That was the point at which they surrendered their identity and, without a thought in reserve, plunged into crap. I disagree on the '93s, btw. Crap. Not to mention its essentially the same design as '93 Fleer. Better than '92? Nope. To me, they stink equally. That's the problem with picking biggest improvement; they never really did. It was all downhill after '88.
February 19, 2014 at 7:47 PM

Mark Hoyle said…
I can really only speak on the first 5 years. I think the first issue was a refreshing change in the hobby. I think the 90 issue is the best. Definetly 92 gets my vote as the worst.
February 19, 2014 at 7:52 PM

kid2119 said…
Probably... Joltin' Joe? I bought a lot of that product that year, and I ended up pulling THREE DiMaggio inserts. All of them were card number 4, "The Streak", None of them autographed. But congrats on the big pull!
February 19, 2014 at 8:10 PM

Commishbob said…
In my mind Score was to baseball as Pro Set was to football. Might be because I was buying them by the pack at about the same time.

As to the questions..... 1994 Score is my favorite but ironically that's about the time I was bailing on baseball and the hobby so I had almost none of them. Those I have now came in Fairfield repacks. But the fact it's my favorite doesn't qualify it as biggest jump because the '93 is right behind it on my list of favorites.

Biggest improvement...'92->'93. Those huge 'stipes' of color down one side or the other was just too much wasted space.

Looking at the sets lines up as they are here makes me realize that although I usually prefer cards to have team logos on the front the three Score sets that do are my least favorite of the bunch.
February 19, 2014 at 8:18 PM

I'll probably be in the minority here, but I'll go with 1994-95 as "Biggest Improvement". I've always enjoyed the dirt-themed borders of '95 for some reason. Not to mention the set has a ton of great photography, even more than usual for Score.
February 19, 2014 at 8:23 PM

Tony L. said…
Biggest Bust: '94 to '95. With the change to the Score logo, the weird borders, and the attempt at "edgy graphics" that look like they are from about 1990, I just don't like these cards.

Don said…
Biggest improvement for me is 95-96. Biggest bust is 88-89. I like most of the year's of score, but the 89 set just has to many blurry photos for my taste. You should have a desperate category for the 94 rookie traded set. Sharp contrast to the regular set. That design is a perfect example of fashion in the early 90's.
February 19, 2014 at 10:29 PM

Unknown said…
I loved the 88 set. I thought that it was such an improvement over what Fleer and Donruss had been putting out. The cards were affordable and they looked great for the price. I still have unopened boxes of this set. At one time I thought "Wow these cards are really going to be worth something someday." How wrong I was. My vote for biggest bust is 88-89, I really thought it was a big disapointment after 88. Biggest improvement would be 89-90. 90 was a really nice looking set especially after my dislike of the 88 set.
February 19, 2014 at 11:40 PM

Captain Canuck said…
I used to love Score. Bright, affordable, big sets, great backs.... after 1992 though Score was dead to me.

GCA said…
88 was great, and the only other design to rival it, although for completely different aesthetic reasons, is 1996. Score was usually a lower end design, but 88 is classic enough to rate with the big boys, esp after 1990 Topps and a lot of the 90's Donruss designs.
96 is clean and sophisticated enough with just enough color to compete with the big dogs again. Though not whimsically fun like the colors in 88, it's the grown-up design pinnacle.
The rest of the early 90's look like junk wax looks.
February 20, 2014 at 4:24 PM

The Lost Collector said…
I loved score in the mid 90s. They kept packs under a Buck, and for a middle schooler that was huge.

Anonymous said…
For the early years of competition, I was a Fleer man... but the multi-colored 1988 Score set lured me away from Fleer, and for the most part I never looked back.

1995 Score was the only one of these sets I didn't make some attempt to complete - note that I said "attempt" because I still haven't completed any of them, but I'm close on 1988. The primary reason I didn't buy any packs of 1995 Score was because I was boycotting MLB and all its properties after the 1994 labor dispute, but even if that hadn't happened... man that's an ugly design.

Fuji said…
I've never been a huge fan of Score baseball products. Score football and hockey is a completely different story. 1989 Score football and 90/91 Score hockey are two of my favorite designs. However, I know you don't care about those two sports. So I'll give you my biggest bust and biggest improvement in baseball: