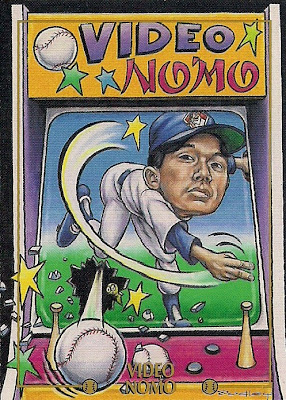 That's because I'd rather keep one-card posts to the Cardboard Appreciation or Awesome Night Card series. But I find this card interesting enough to devote an entire post to it.

The card came from J.T. of The Writer's Journey and it's an obvious reference to Hideo Nomo. It's from a readily available baseball card parody set called Cardtoons that was issued in the mid-1990s.

I like the card enough that I'm adding it to my Hideo Nomo player collection. It's officially card Nomo card No. 394 in the collection.

The thing that threw me was on the card back.

Nomo didn't appear in a major league game until 1995.

These are the questions that I constantly need answered because I stopped collecting in 1994. After a week or so of puzzlement, I finally consulted my Sports Catalog of Baseball Cards, which informed me that the copyright on all of the Cardtoons cards is indeed 1993, but the cards were not issued until 1995.

So perhaps Video Nomo is a late addition to the set to capitalize on Nomo's popularity in 1995.

If I add this card to my Nomo collection, I suppose I also need to chase down cards of Tommy Lasagna, Mike Pizazz and Sandy K-Fax (a fax machine reference! How '90s!). No rush there, though.

I'm on to more urgent matters.

Like how could I possibly need three more 2013 Topps Heritage Dodgers after I thought I had already completed the set?

Jason T. Carter said…
The stand at the Antique Mall had a handful of packs, but I only bought one because I had no idea what they were. I like them, so I might buy some more next time I'm there. If I get any of the other Dodgers, they're yours.